There is a common, all-the-while wholly inaccurate, view that turtle species most often seen in captivity are the best fit for your family. I am here to tell you that these common misconceptions are not only noteworthy, but also potentially dangerous for the animals and aspiring keepers involved. It is risky to assume that the same attributes that make a species popular in the trade also make the animals a good fit for novice keepers. In order to understand if a turtle may or may not be a good fit for you or your family, it helps to grasp how popular species grew into the household names they are today. 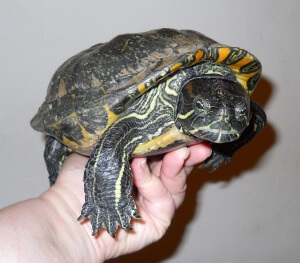 Recently, I was asked, through our YouTube channel, “Can you give away a snapping turtle or a alligator snapping turtle away for free please.” I responded “This is an interesting question for a couple reasons. Free turtles are great in some ways, but free Snapping Turtles are a bit more problematic. They obviously get huge, and require tons of heat, food, filtration and large, thoughtful enclosure designs. All of this costs thousands of dollars over the years. So, you have to understand why someone asking for free Chelydra ($10 value) or Macrochelys ($50 value) might raise a red flag. Know what I mean? Good luck and look forward to talking more in the future.”

This example is a good illustration of a relatively common pet that is not a good fit for the vast majority of keepers, as well as a potential caretaker not comprehending the time, energy and money that it takes to care for one of these animals. These species are probably only kept until adulthood by a fairly small fraction of the people who started with neonate snapping turtles. In fact, Snapping Turtles are such a bad fit for so many of us, that you will very rarely hear many educated keepers recommend keeping them. Most often, Chelydra and Macrochelys keepers will try to educate others about what a large undertaking their passion is, as well as the dangers of taking on projects that will become more and more difficult to manage over time. It is important to keep in mind that the Common Snapping Turtle (Chelydra serpentina) can grow to roughly 4500 times its hatchling size as an adult. That remarkable growth is even more extreme in the Alligator Snapping Turtles of the genus, Macrochelys. 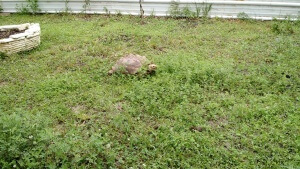 Another example of a species that is popular, despite its obvious issues of concern for potential chelonian buyers, is the African Spur-Thighed Tortoise (Centrochelys sulcata). There is a HUGE market for this species, despite the fact that rescues around the country are inundated with juvenile sulcata tortoises that are deformed due to Metabolic Bone Disease as a result of improper husbandry. Chris Leone (per. com.), Owner/Operator of Garden State Tortoise and our Director of Animal Husbandry, recently remarked that this species is the second most popular species that he offers. It is probable that the low asking price is enough to make potential buyers forget about the obvious issue of what might happen to the tortoise in the future. I am always shocked when I see the $70 sulcata tortoises selling like hotcakes at a Northeast Reptile Expo, while $100 Elongated and Hermann’s Tortoises sell at a much slower rate. Despite all of this, informed people will still tell you to proceed with caution, if at all.

What’s even more alarming, is when a commonly kept species is regarded by many, even experts, as a suitable pet. The ultimate offender in this case is the infamous Red Eared Slider (Trachemys scripta elegans). I often joke that this species is in as many US States and countries around the world as the Super Bowl. In fact, the species has now been proven to pose a serious threat to native species across the world, outcompeting native species for natural resources and potentially transmitting disease. This is one of the most invasive species on the planet, certainly so amongst turtle species, due to the combination of overall popularity and their being a poor fit for so many keepers. You literally can’t give these animals away without considerable effort. As these turtles grow they become increasingly undesirable and are surrendered to rescues or released into local ecosystems. 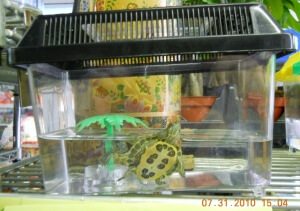 Why then would educated keepers argue that this species is a good fit for first time turtle keepers? The argument that is most often made points to hardiness and adaptability. Red Eared Sliders have proven to be able to live in deplorable conditions, to breed quite easily, and to survive in a variety of enclosures, including those too small for a turtle their size. There are further reasons these turtles are as popular as they are in the trade, which is more evident when one understands the main factor that makes all of these common species as abundant as they are. Each one of these species breeds quite easily in large ponds or pens, especially in warm climates. What’s more, is the fact that the Red Eared Slider, as well as the other species mentioned in this article, lay a considerable amount of eggs per clutch.

Gerard Siatkowski, Conservation Husbandry Specialist of theTurtleRoom, knows first hand how straight-forward and downright lucrative breeding Red Eared Sliders can be. Unrelated to his conservation keeping for theTurtleRoom, he produces these sliders, specifically unusual genetic mutations known in the hobby as “morphs,” in extremely large numbers. In warm climates, this species can lay eggs all year round, as many as 6 clutches of upwards of roughly 30 eggs. 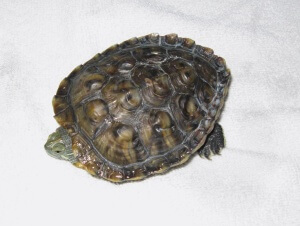 The fact that the Red Eared Slider is easily and swiftly reared to a size of four inches only strengthens its stranglehold on the pet trade. As so many of us became aware early in our turtle endeavours, the Federal Four Inch Law is an important one in our hobby. The law forbids the sale of turtles under four inches in length and was created after instances of salmonella poisoning in children with pet turtles in the mid 1970s. Gerard has noted his ability to raise Red Eared Sliders to breeding size in only two years of growth. An appropriate timeline for raising Red Eared Sliders to the legal four inch length may be less than one year, if high temperatures and plenty of food are available.

Another important factor is where these animals are being produced. The majority of the Red Eared Sliders produced in this country are from turtle farms in Louisiana. African Spur-Thighed Tortoises and Snapping Turtles are produced in large numbers in huge habitats most hobbyists could only dream of, most of which are in warm climates. The offspring are then sent out across the country, even to cold climates where keeping adult animals of these species is a huge challenge. Some are sent overseas each year, as well.

We have all heard mention from newer keepers, explaining their “rescuing” a turtle from a pet shop. There’s no such thing. In reality, you are dooming other animals to the same fate, perhaps dying in the pet store or in living through improper care of another new keeper, less informed than yourself. You see, when you buy a turtle from a pet store, the store will then replace the product which has just sold with new stock. If an item, or in this case, an animal, attracts interest from their customer base, you can rest assured they will restock that product. 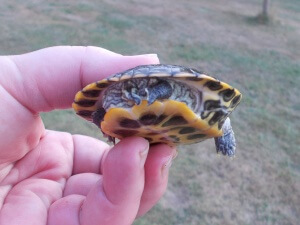 These animals are all hardy species, tolerant of a wide range of captive conditions. They are strong and personable and people have stood the test of time, remaining popular in the trade for these reasons. It is our duty, as experienced keepers, to be patient and polite to the new generation of aspiring hobbyists. We must educate them on these issues, to avoid the triumph of misinformed reasoning at times of potential impulse purchases. This is a time when split-second decision making can be harmful not only to the animal, but the person as well. This customer, an unsuspecting victim of assumption, is now burdened with decades of necessary care for an animal that might not be a right fit to begin with.

Make the effort to educate yourself. A Common Musk Turtle (Sternotherus odoratus) or Southern Painted Turtle (Chrysemys dorsalis) can both be purchased for less than $20 each. Both stay a manageable size and bringing keepers great joy. So why not challenge yourself to break the cycle of impulse purchases? Why continue to support what works best for the turtle world’s equivalent of puppy mills? The people breeding these species in large numbers, especially Red Eared Sliders, do not care about you, or the animal. Stop proving that what they are doing is important to you. Dare to reverse the trend. In doing so, perhaps we can save countless animals from being born into sad, painful lives, the likes of which are seen far too often by far too many of us that do care.

One solution for keeping a Sulcata in cold weather 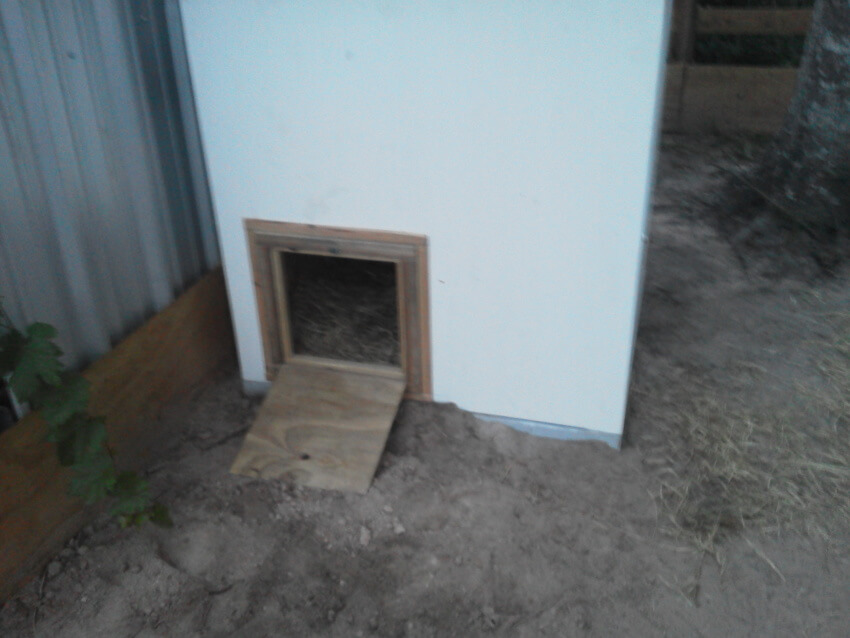 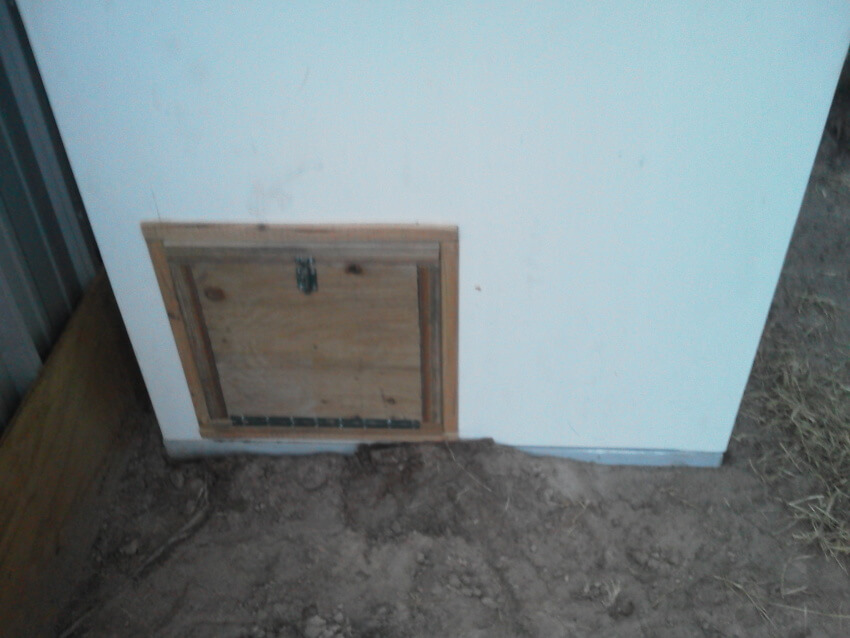 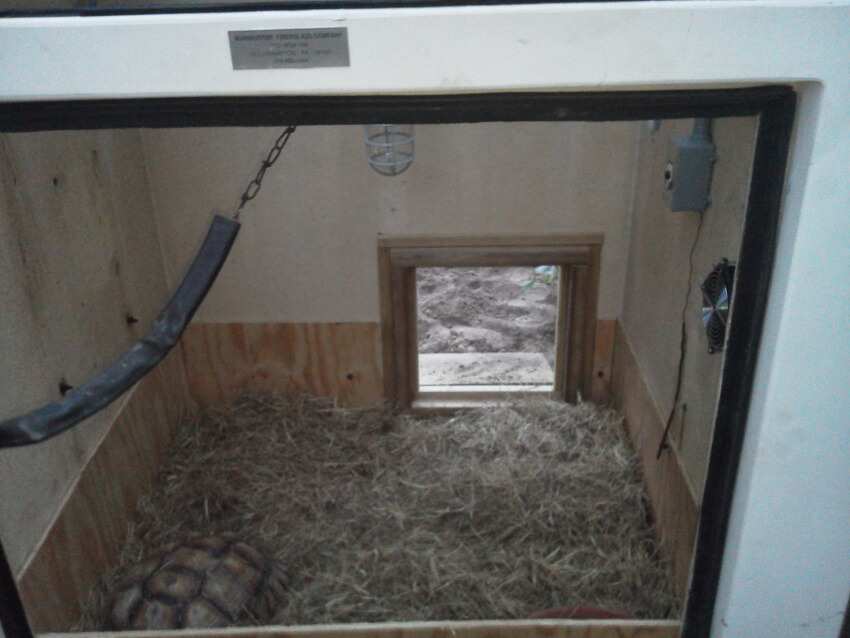