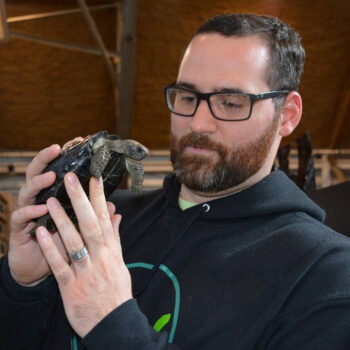 Anthony Pierlioni was the “Best of 2017” Editor’s Choice for “Chelonia Personality of the Year” by The Reptile Report. As the Senior Director of theTurtleRoom, Anthony oversees educational efforts, including video and audio media production, like The Pondcast. He also authors educational resources for the site and works with other organizations (AZA and TSA) and privately to develop quality, detailed captive breeding programs of carefully selected turtle and tortoise specimens in an effort to meet theTurtleRoom’s conservation goals. Anthony has also written a book on the Geoemyda genus as a whole, published by Living Art Publishing in 2016 as part of their “Turtles of the World” series, and several articles in magazines such as REPTILES, The BATAGUR, Testudo (Italian), and RADIATA (German). Anthony has a B.A. from Rhode Island College and works in management for VCA Animal Hospitals. He also travels around the Northeast training new hires to VCA as a Certified CATapult Trainer. Anthony played basketball through college in Rhode Island and after college in Italy.

Anthony recalls going to a local pond to catch turtles with his aunt at the age of 5. Before the age of 10, Anthony had kept Eastern Painted (Chrysemys picta picta), Common Snapping (Chelydra serpentina), and Eastern Box Turtles (Terrapene carolina). Anthony kept turtles through his adolescence, adding the Malayan Box Turtle (Cuora Amboinensis) and Red Ear Slider (Trachemys scripta elegans) to the list of species he had worked with. Seeing the large Alligator Snapping Turtle (Macrochelys temminckii) at the Bronx Zoo at age 9 opened his eyes to more than what could be found in the Northeast.

In college, Anthony bred Bearded Dragons and Leopard Geckos and also worked with Centrochelys sulcata (Sulcata) tortoises, various turtles of the Trachemys, Graptemys, Clemmys, Cuora, Macrochelys, Pseudemys, Chrysemys, Terrapene, and Malaclemys genera. When he purchased his first Alligator Snapping Turtle, a childhood dream had been fulfilled. This experience would prove instrumental in leading to new heights of research and networking.

Anthony first hatched an iconic North American species, the Spotted Turtle (Clemmys guttata). He currently specializes in Asian species, particularly those in the Geoemyda, Cuora, Sacalia, and Mauremys genera, with several of these animals being a part of their respective AZA Studbooks and SSPs for their species. His group of C. flavomarginata (Yellow-Margined Box Turtle) is part of the TSA Taxonomy Management Group for the species. Anthony also keeps several smaller tortoise species and many cold tolerant North American species.

Anthony lives in the Northeast with his wife, Shannon, and daughters, Cambria and Maddalena. He and his family are often on the move, giving turtle presentations at schools, nature and science centers, herpetological societies, and conferences.