theTurtleRoom’s staff step behind the exhibits at hubs of conservation to give you a look at the real work happening in Zoos and Aquariums across the country. Steve and his wife, Lisa, bring you Volume II: Knoxville Zoo.

Knoxville Zoological Gardens is home to nearly 1,000 animals. If you read the signage as you walk through the zoo, you’ll get a sample of the conservation efforts happening on the Zoo’s property. However, it isn’t until you get a chance to step behind the exhibits, that you get to see the efforts and successes of conservation coming to life. While our focus will be on their Chelonian conservation efforts, the zoo is a leading institution for the conservation of numerous species from across the globe, participating in more than 30 Species Survival Plans (SSP). 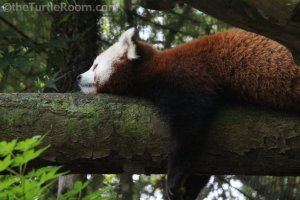 Knoxville Zoo has a spectacular reptile collection with more than 400 specimens representing over 80 species. The Herpetology Department has an international reputation for their success breeding threatened and endangered species. During recent years, conservation of turtles and tortoises has become a priority for Knoxville Zoo and these species now make up over half of the herpetofauna collection. While their Chelonian conservation efforts are diverse, Knoxville Zoo’s focus is primarily in two areas: the local populations of Glyptemys muhlenbergii (Bog Turtle) and the tortoise species native to Madagascar, Pyxis and Astrochelys.

Their efforts with the Bog Turtle populations native to the northeastern tip of Tennessee have been well publicized. The first populations in Tennessee were discovered in May 1986 from two wetland sites in one large valley. This discovery led to The Tennessee Bog Turtle Program, a partnership between Knoxville Zoological Gardens, The Nature Conservancy of Tennessee, Tennessee Wildlife Resources Agency, and numerous private landowners. This program features both in-situ and ex-situ components. Elements of the program include: ecological studies in natural sites; radio-telemetry to document movement and habitat use; restoration projects to expand habitat; educational programs; habitat management; egg-harvesting, hatching, and release; captive-breeding/head-starting at Knoxville Zoo; and an experimental release project. To read more about their efforts with Bog Turtles, check out this article. 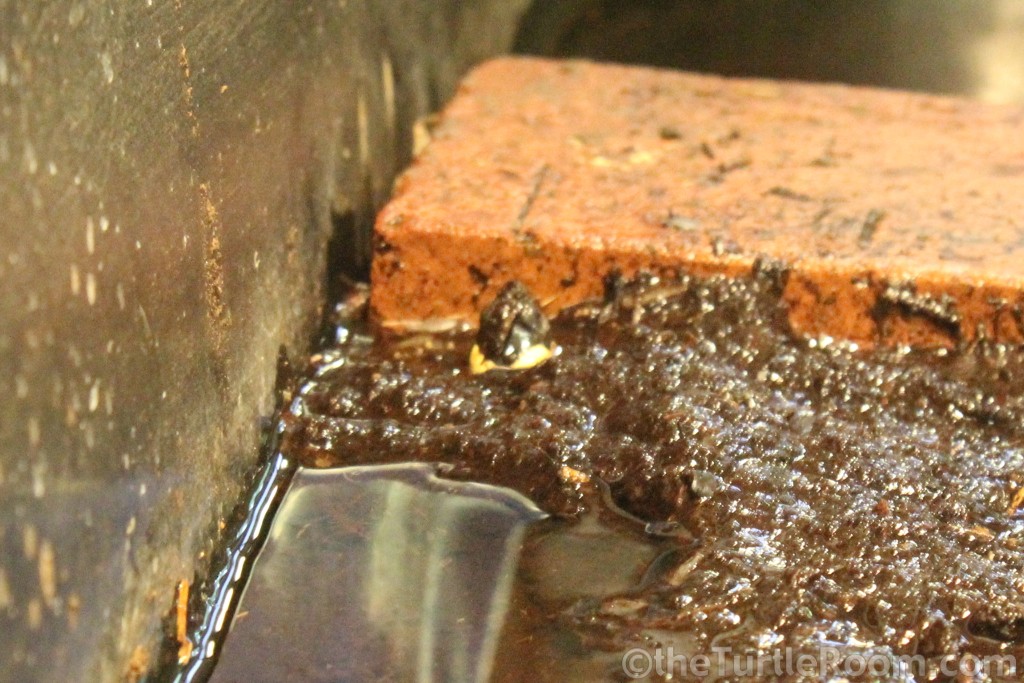 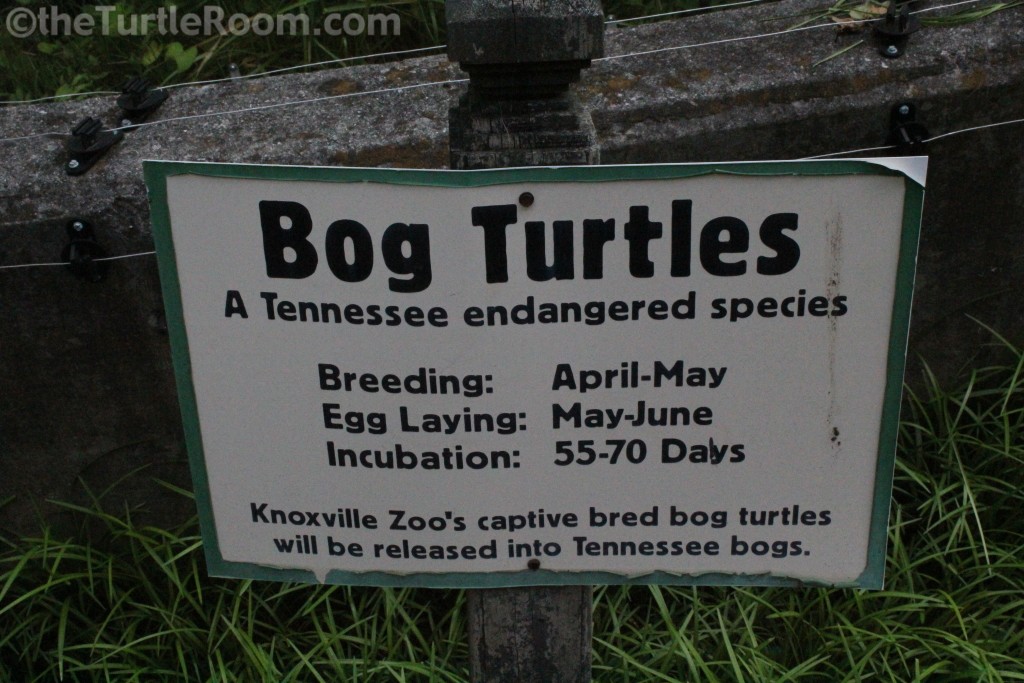 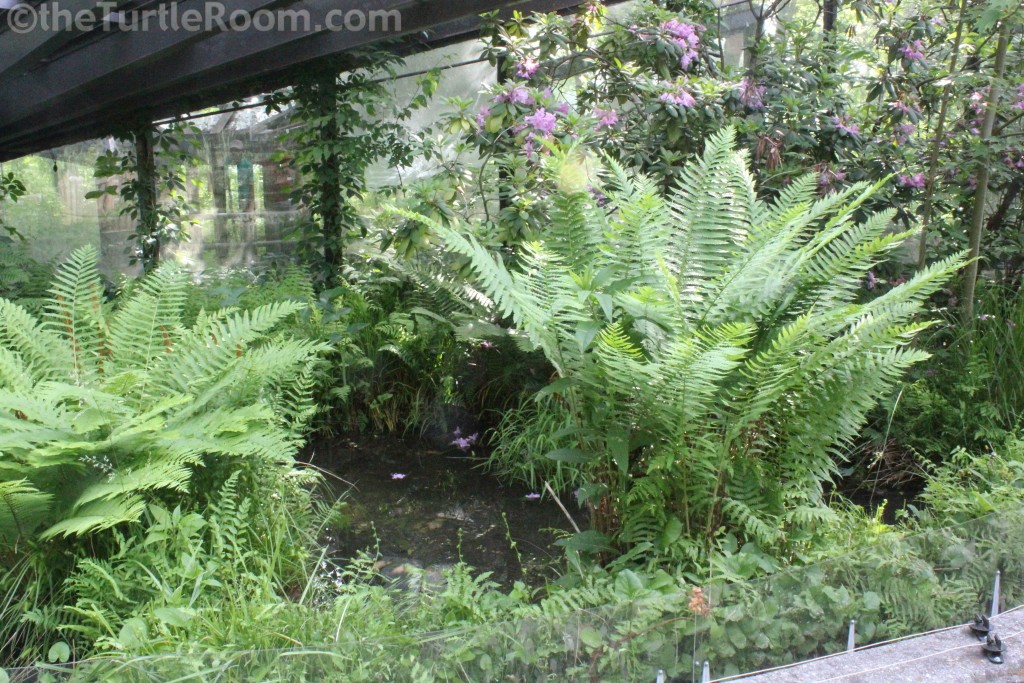 Five of these species have been successfully bred, the exception being the Ploughshare Tortoises, which are still juveniles and only a few years old. Knoxville was the first U.S. zoo to successfully breed the Flat-Tailed Tortoise. While the adult pair of Radiated Tortoises is frequently on exhibit, as are several Pyxis adult pairs, most of this work occurs in the “Kitchen”, Knoxville Zoo’s indoor Chelonian facility. With well-developed care methods and natural habitats kept within specific parameters, they have had exceptional success with this group of species. The Zoo seems to produce more and more Pyxis offspring each year. 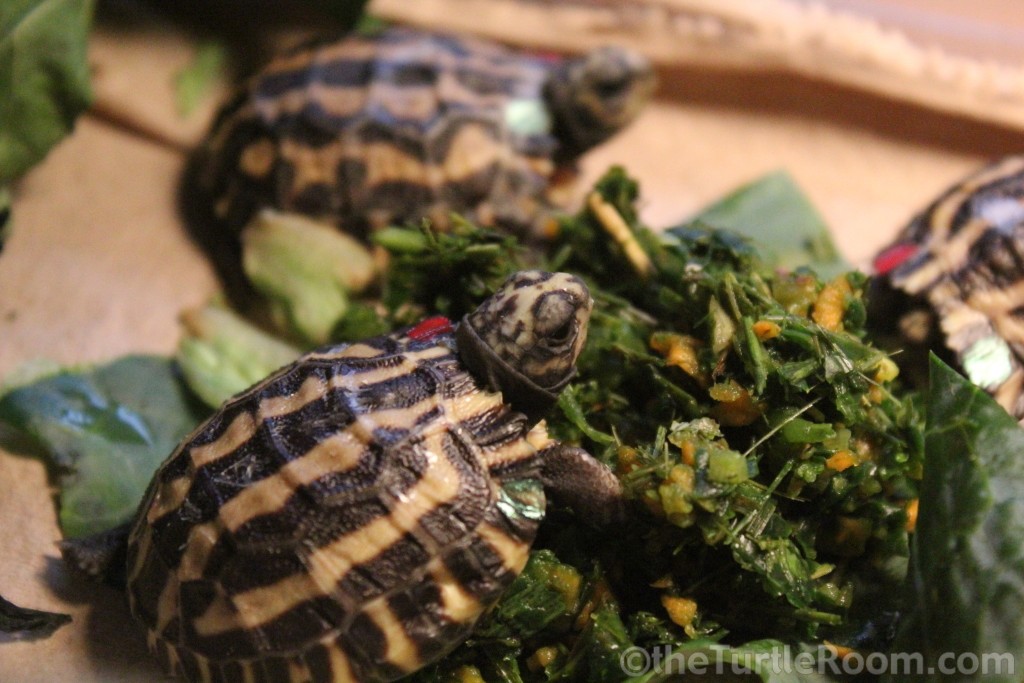 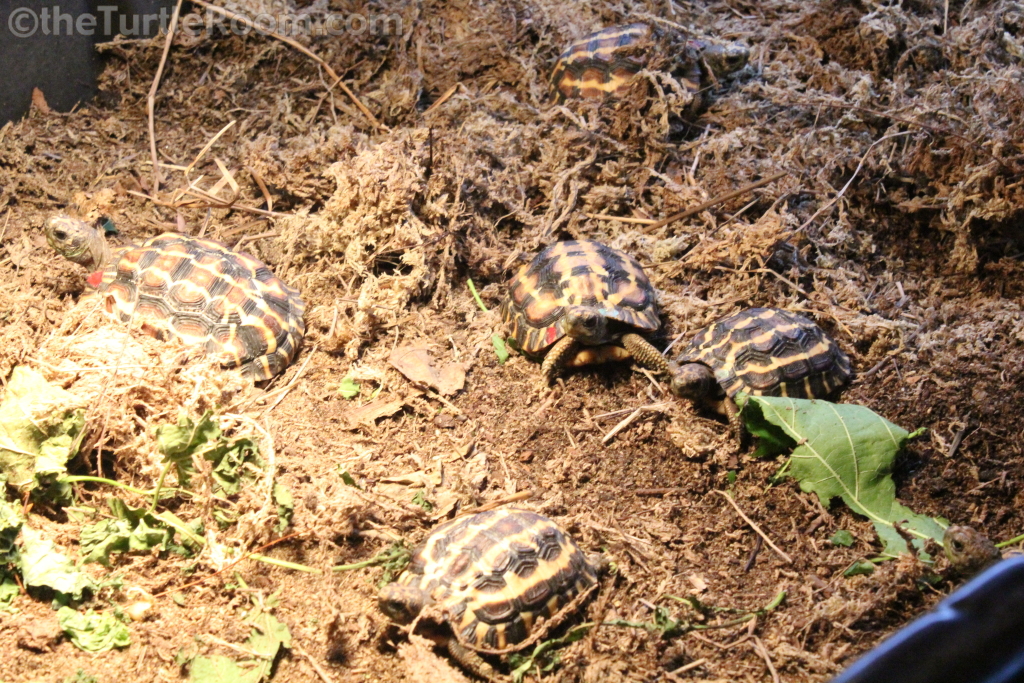 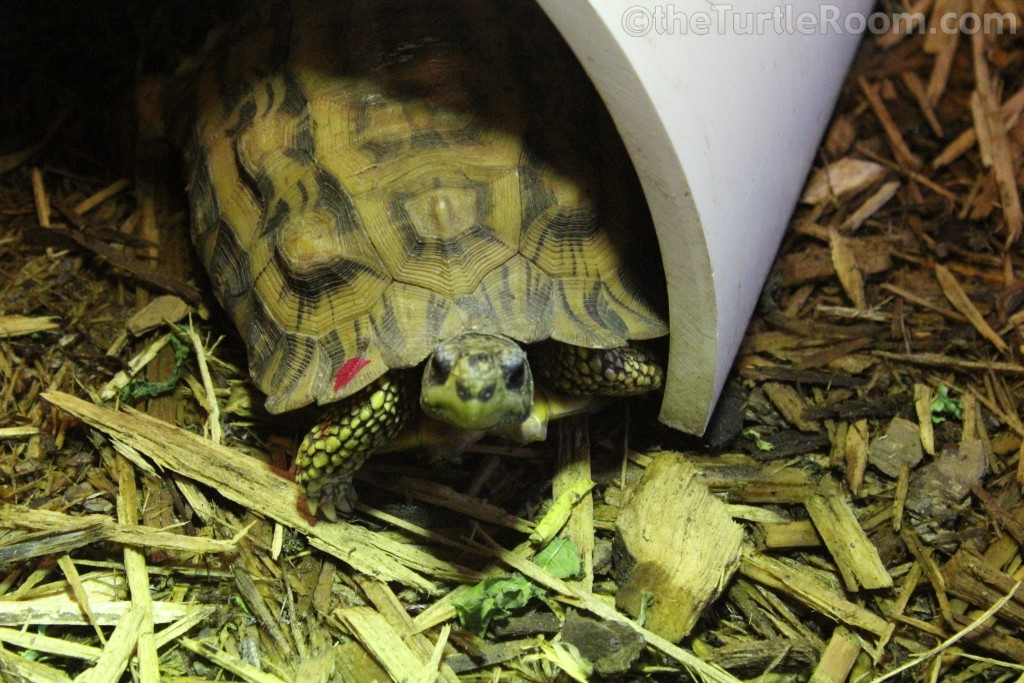 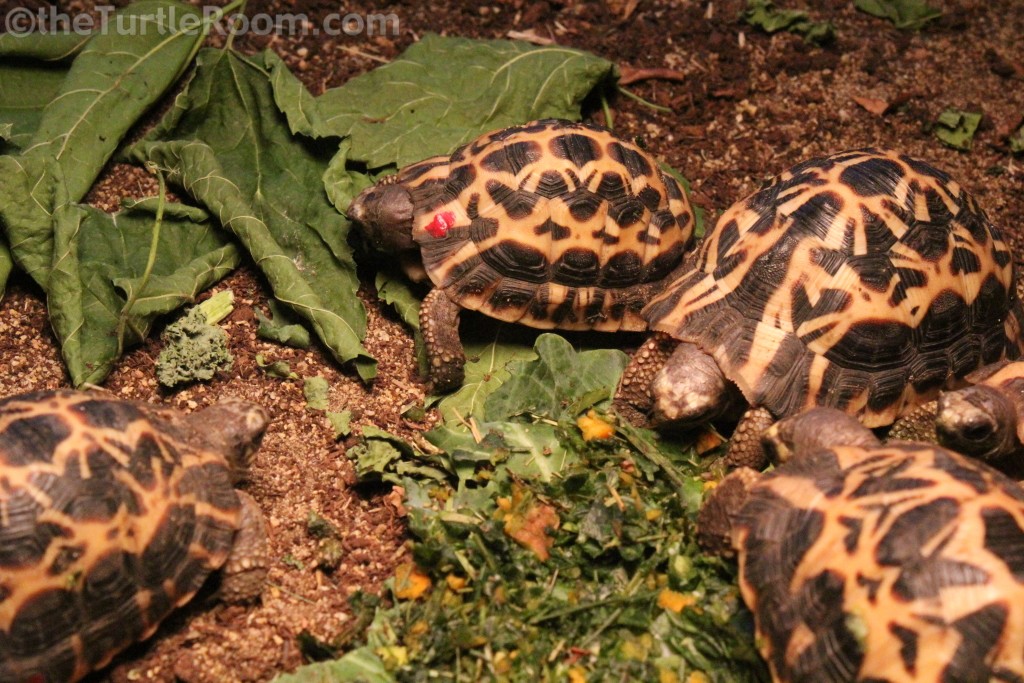 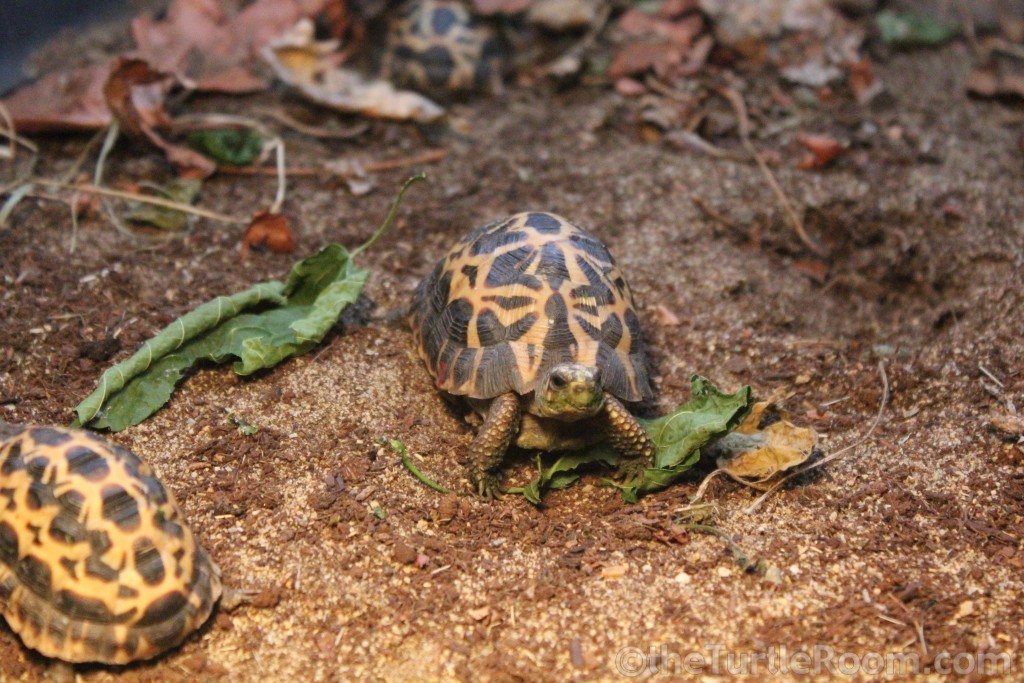 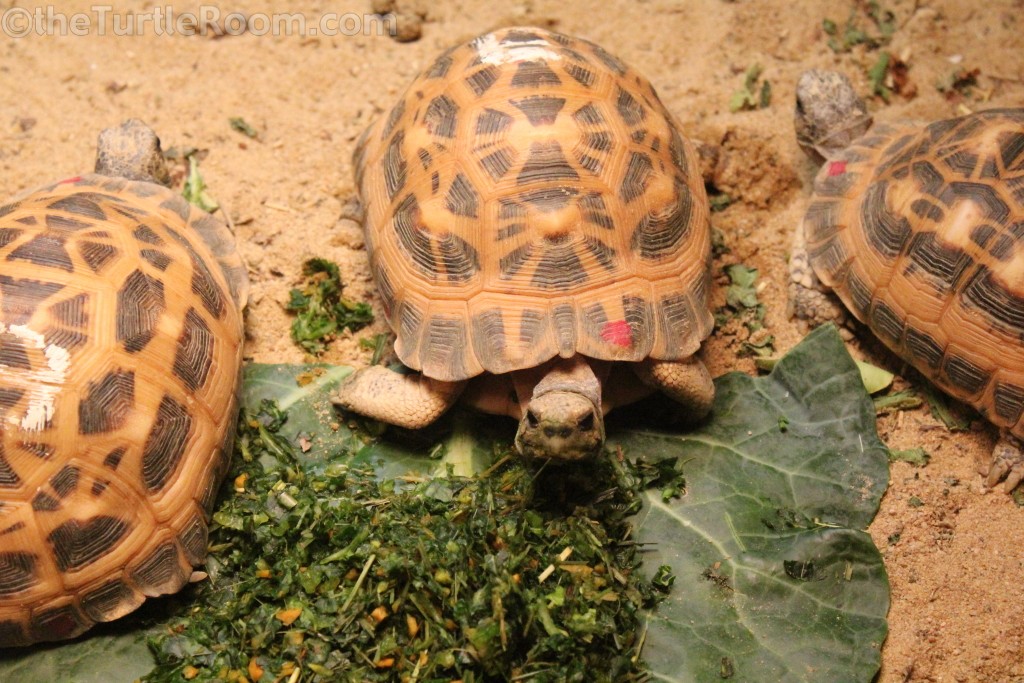 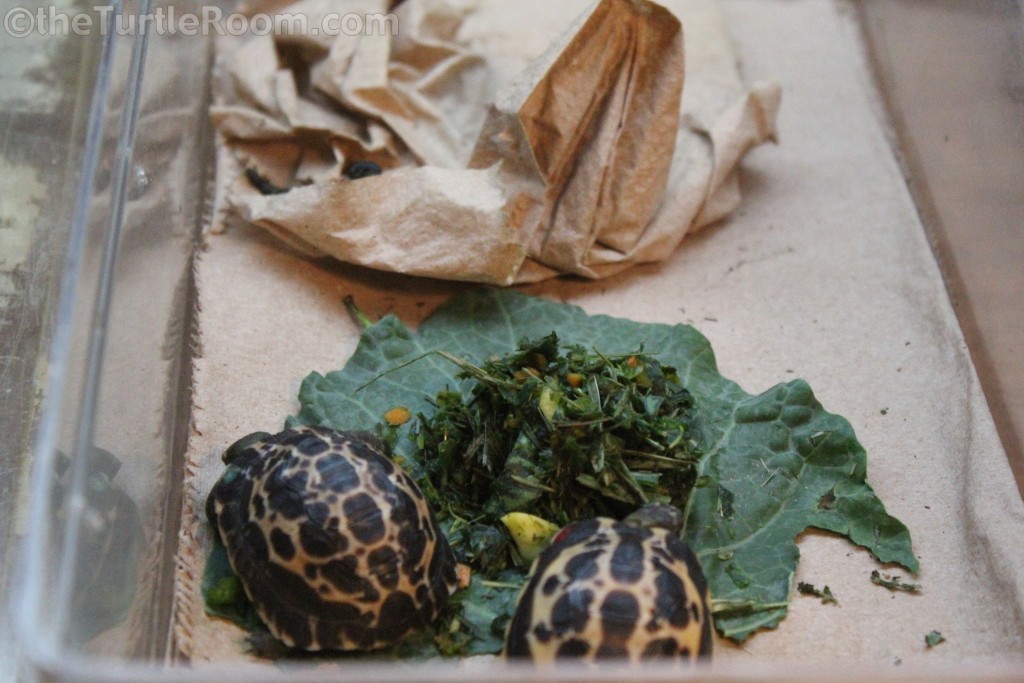 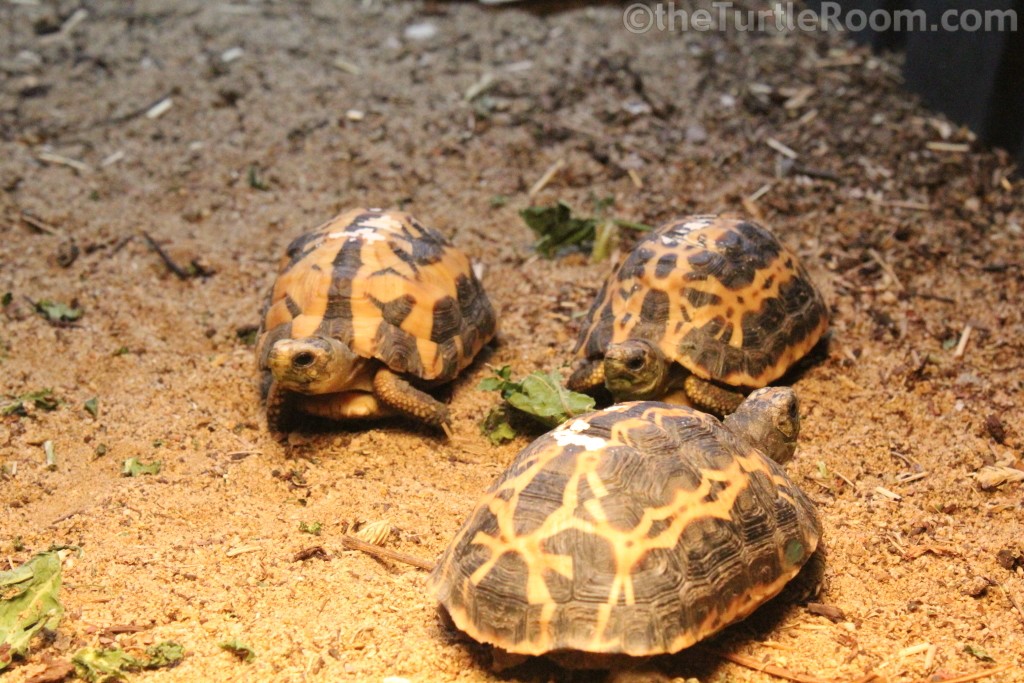 They recently received a small group of Astrochelys yniphora (Ploughshare Tortoise) from a confiscation. Knoxville Zoo is one of only 3 institutions in the U.S. with these special tortoises and is the only one to place them on exhibit. As the Ploughshare Tortoise is one of the most critically endangered tortoises in the world, the efforts of Knoxville Zoo, Behler Chelonian Center, and Zoo Atlanta will be under the microscope as they play a key role in helping sustain these beautiful animals. The plight of the Ploughshare Tortoise has recently received extra attention through a special report on 60 Minutes. A smuggler was also recently caught attempting to smuggle approximately 10% of the known members of the species in suitcases; about half of that group has since died due to the result of being taken from the wild. 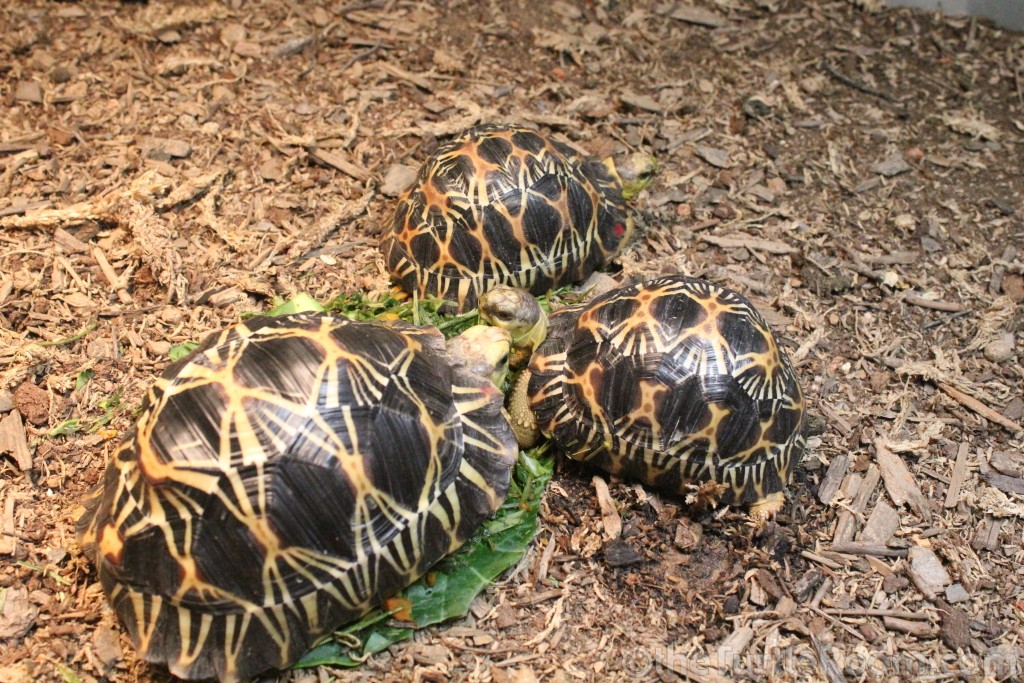 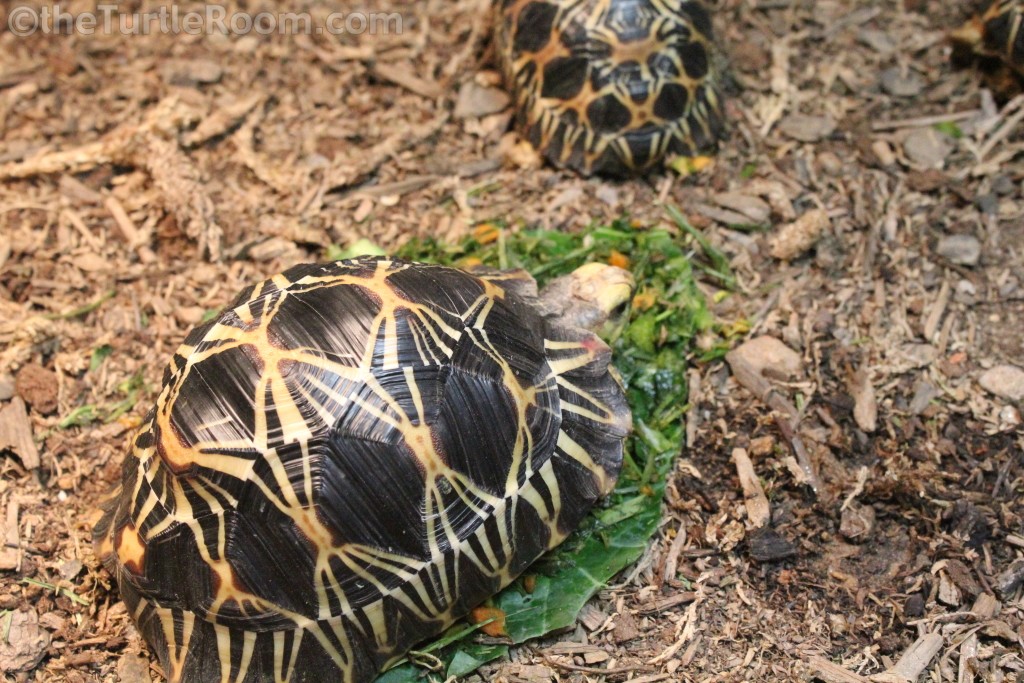 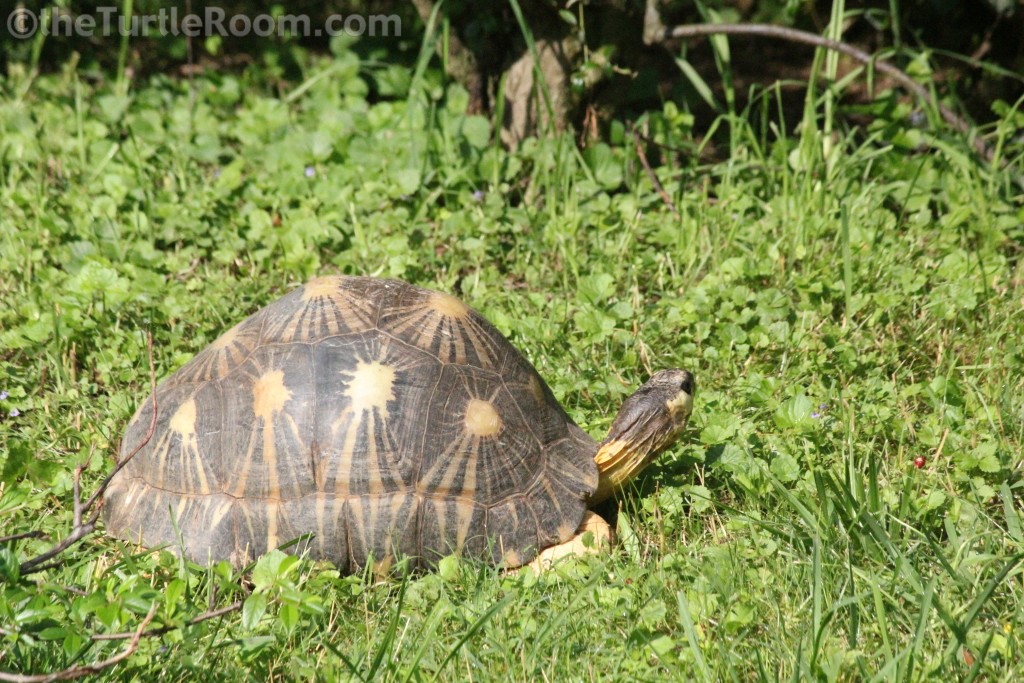 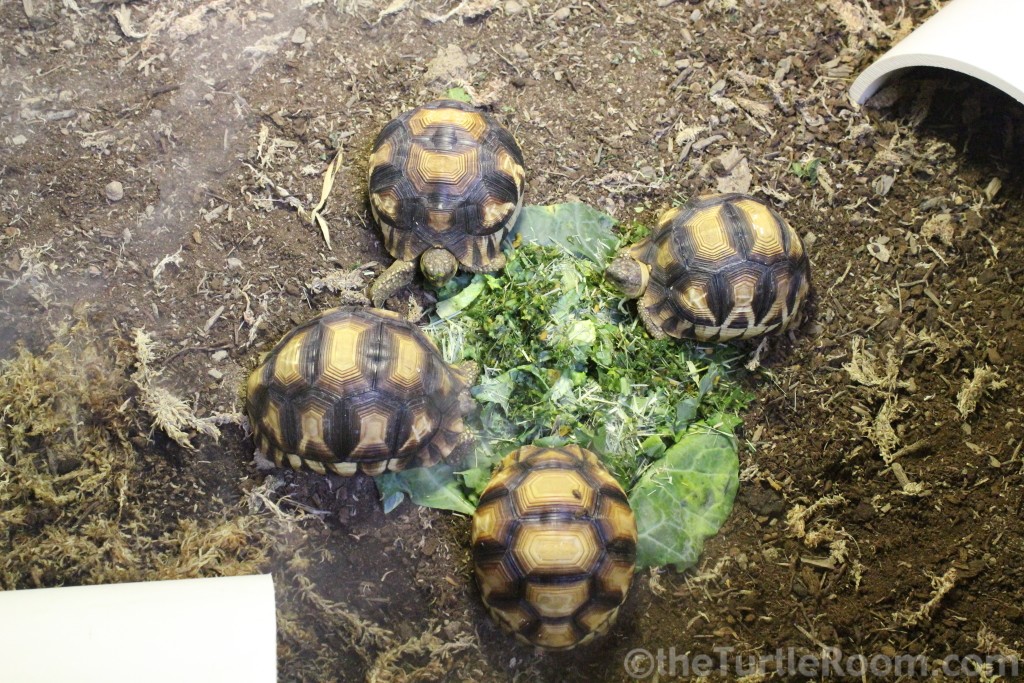 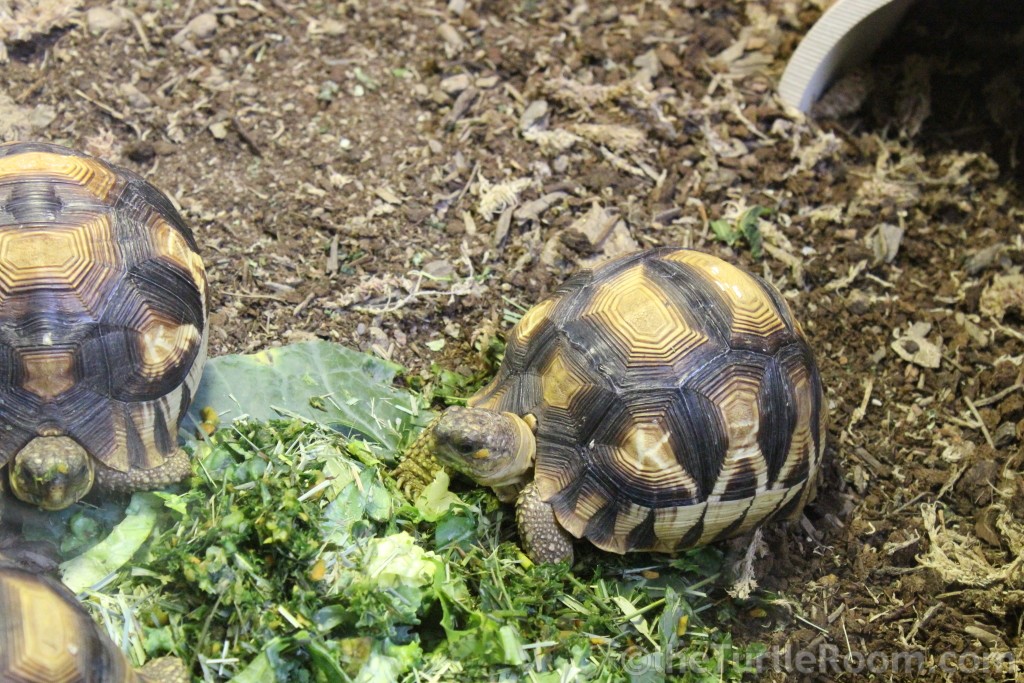 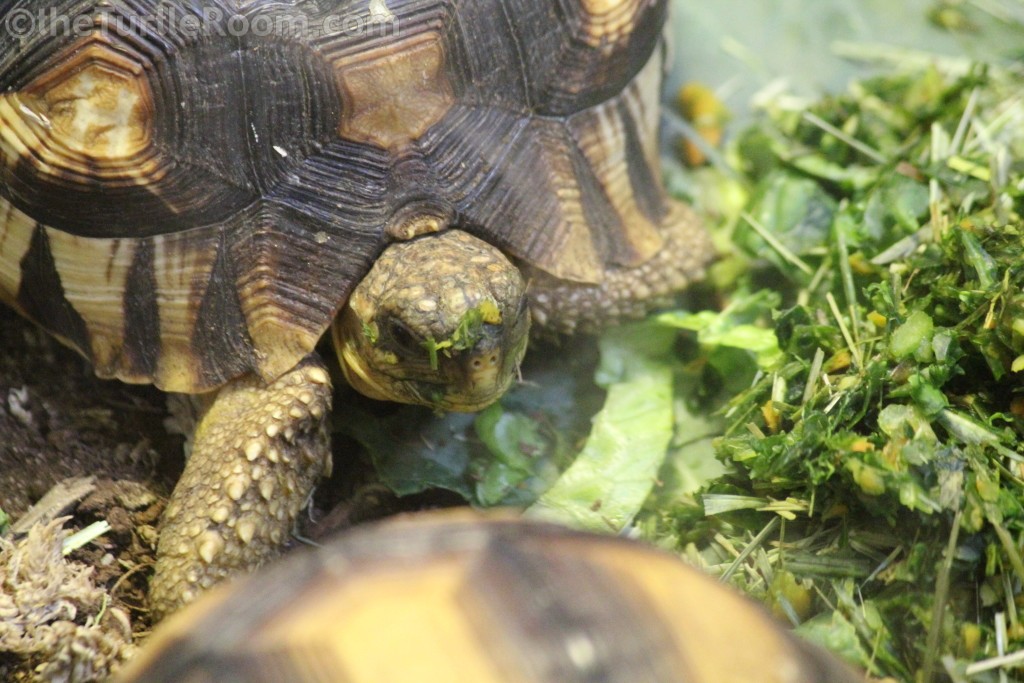 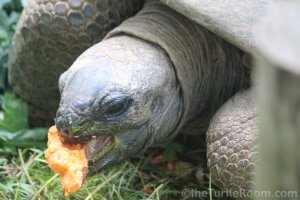 Patches, a 220-pound female Aldabra, is one of Knoxville Zoo’s most recognizable reptiles to zoo patrons.

First discovered in 1984, Cuora pani is a critically endangered species native to China. Habitat destruction and exploitation for the food trade are the biggest culprits of this species’ status in the wild. The staff of the Herpetology Department is currently planning to move this pair off-exhibit into a new enclosure they are designing for this species in an attempt to breed the pair. Like Pan’s Box Turtle, the endemic Roti-Island Snake-Necked Turtle, a 1994 discovery, is also critically endangered and considered to be “extinct” by commercial traders. There is concern the wild population is so small it will be unable to sustain itself. Knoxville Zoo is part of a large captive effort to maintain this species. 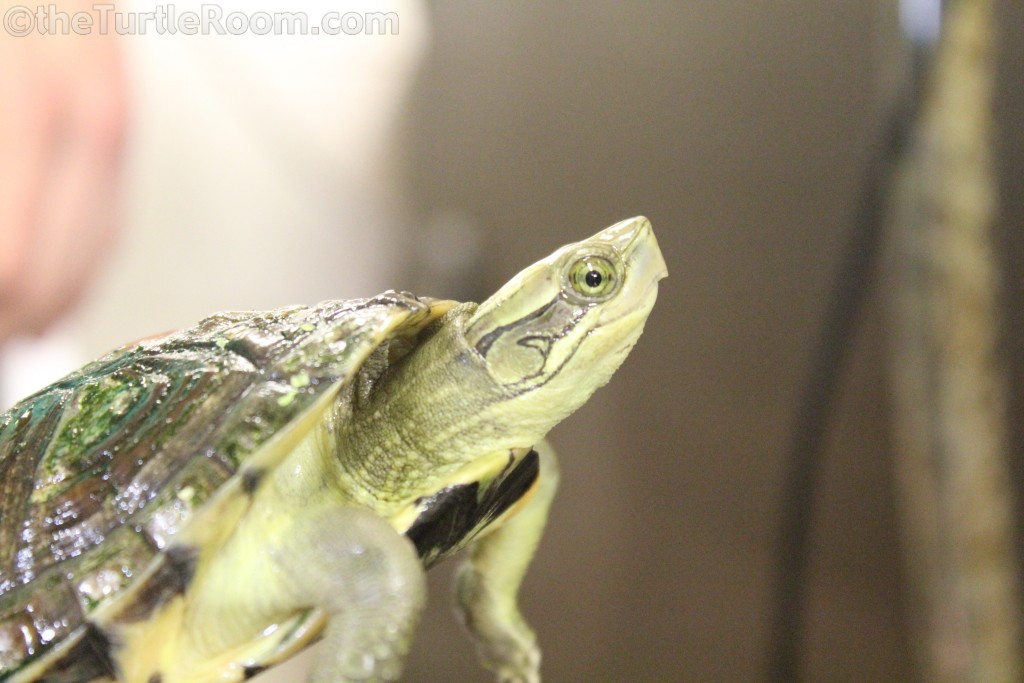 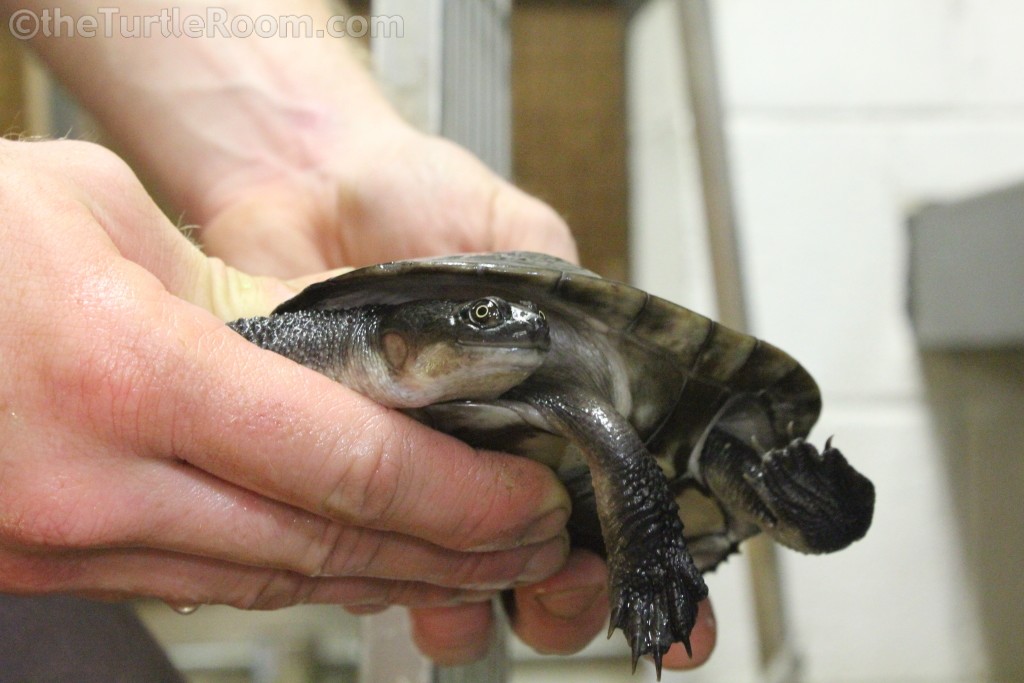 Other off-exhibit species being worked with are Notochelys platynota (Malayan Flat-Shelled Turtle), Heosemys depressa (Arakan Forest Turtle), Heosemys spinosa (Spiny Turtle), Malacochersus tornieri (Pancake Tortoise), and Manouria impressa (Impressed Tortoise). A new addition to the Zoo’s group of turtles, the Notochelys platynota are temporarily housed indoors while waiting for their outdoor, off-exhibit pen to be completed. Classified as vulnerable, habitat destruction is only one of their worries; trade in east Asian food markets has cut the population drastically over the past 30 years. The other species listed here are also involved in breeding programs and have seen success at Knoxville Zoo and their partner institutions. We had the opportunity to see the parents and offspring of both Pancake Tortoises and Impressed Tortoises. 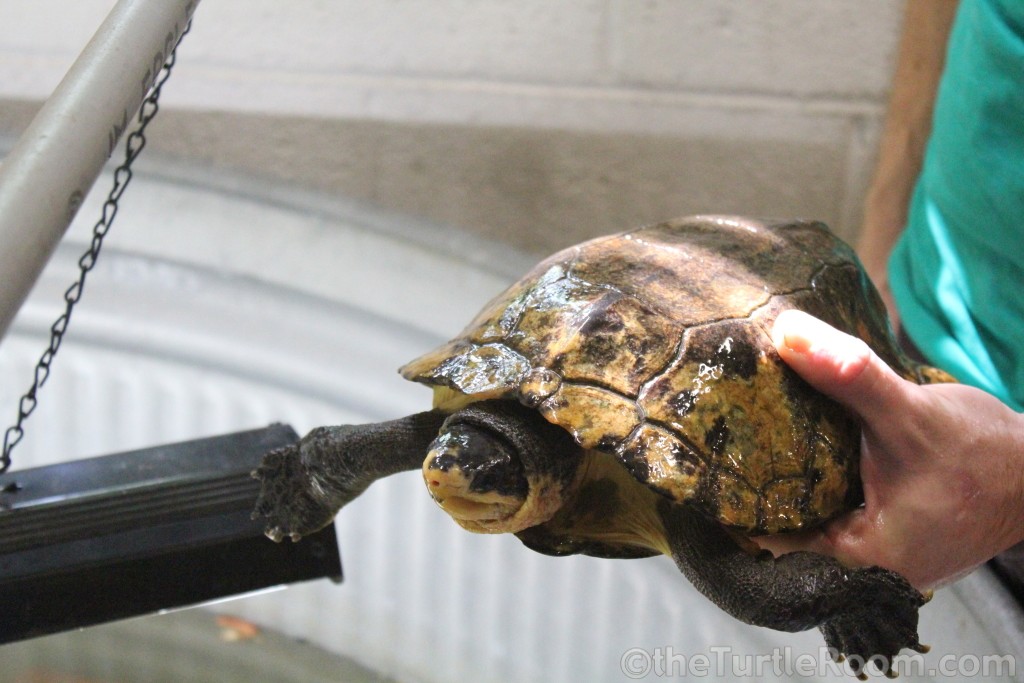 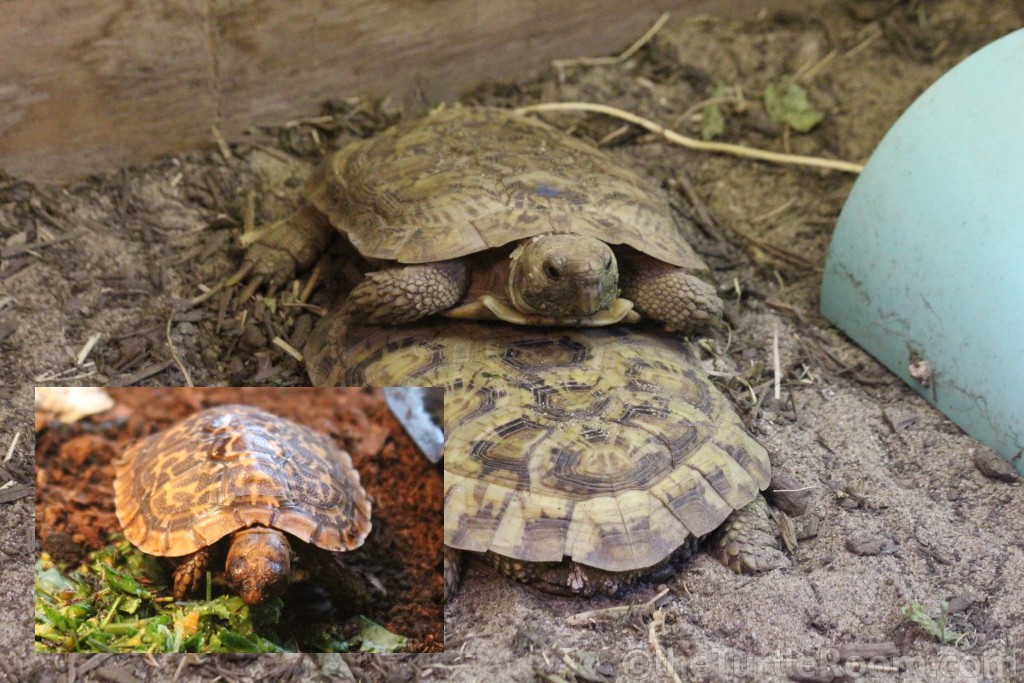 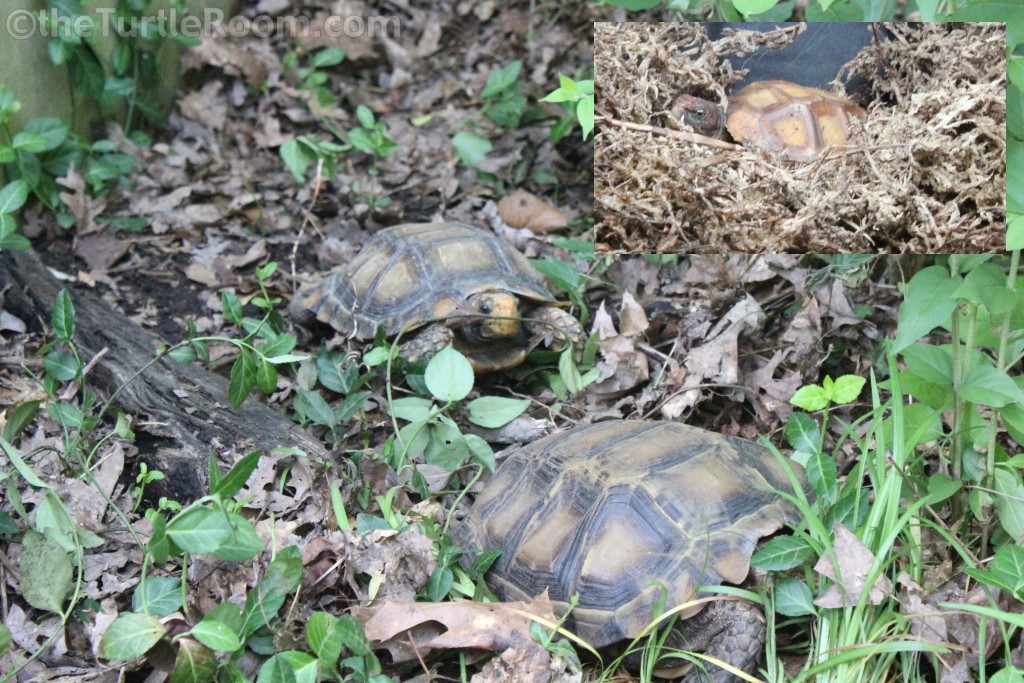 We believe in the work being done by the Zoo and its staff and hope to continue the relationships and partnerships we’ve developed with them. We hope you will join us in supporting the Knoxville Zoological Gardens through a donation, “adopting” an animal, membership, or simply a visit.

*All photos taken by Lisa and Steve. Image of the Zoo entrance used with permission of Knoxville Zoo.