theTurtleRoom’s staff step behind the exhibits at hubs of conservation to give you a look at the real work happening in Zoos and Aquariums across the country. Steve and his wife, Lisa, bring you Volume I: Tennessee Aquarium.

Tennessee Aquarium maintains over 10,000 animals and hundreds of plant species. One of their key conservation programs is on display in the River Journey building where you get to know the Lake Sturgeon (Acipenser fulvescens) and can even touch one. Hiding behind the high-profile conservation programs on exhibit are dozens of other ongoing programs working to save threatened and endangered species. While our focus will be on their Chelonian conservation efforts, the Tennessee Aquarium is highly involved in the conservation of dozens of species native to the southeastern quadrant of the United States. 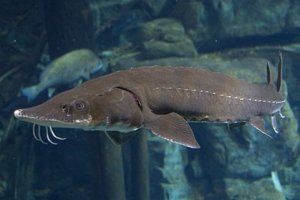 Among the non-Chelonian US natives TN Aquarium is working with are the previously mentioned Lake Sturgeon (Endangered in Tennessee), Barrens Topminnows, Southern Appalachian Brook Trout, Conasauga Logperch, Blue shiners, Flame Chub, Laurel Dace, and 18 species of mussels and snails such as the Interrupted Rocksnail and Alabama Moccasinshell. Since 1998, TNACI (Tennessee Aquarium Conservation Institute) has helped lead a statewide effort to establish a self-sustaining population of Lake Sturgeon in Tennessee. Since they started releasing fish back into the wild approximately 12 years ago, 125,000 Lake Sturgeon have been released into the upper Tennessee River System. These fish have also been released into the Cumberland River at Nashville. In 2010, TNACI held their first release in their own backyard releasing them into the Tennessee River at Chattanooga. Another center of focus is the Mobile Basin drainage into the Gulf of Mexico. As the largest drainage into the Gulf east of the Mississippi River, the Mobile Basin is home to over 90 species of fish, 25 species of mussels, various snails, and numerous turtle species.

Tennessee Aquarium has more than 40 Chelonian species on exhibit, and many more behind the scenes; they have one of the largest freshwater turtle collections in the US. Among the native Chelonian species Tennessee Aquarium works with is Graptemys flavimaculata (Yellow-Blotched Map Turtle). This turtle has received special focus compared to the other native turtles at the Aquarium. In addition to their restoration programs working with fish, the Aquarium has worked to restore the Yellow-Blotched Map in its native Pascagoula River system. On top of the restoration program, TN Aquarium also participates in the AZA (Association of Zoos & Aquariums) SSP (Species Survival Program) for Graptemys flavimaculata and a closely related species, Graptemys oculifera (Ringed Map Turtle). While their Ringed Maps have yet to produce offspring, they routinely hatch Yellow-Blotched Maps each year. 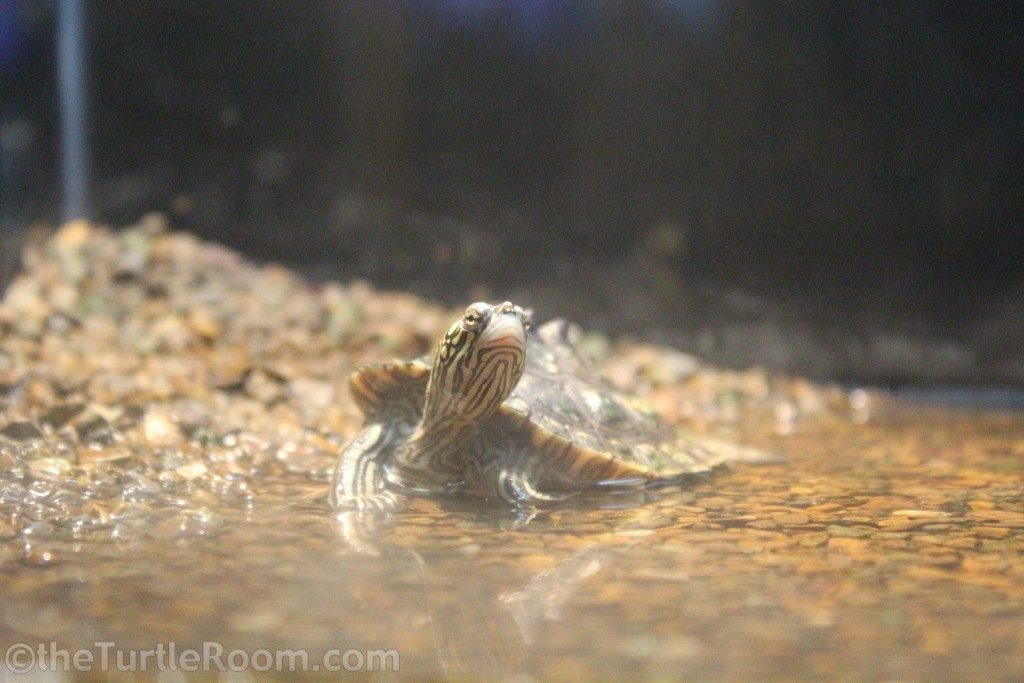 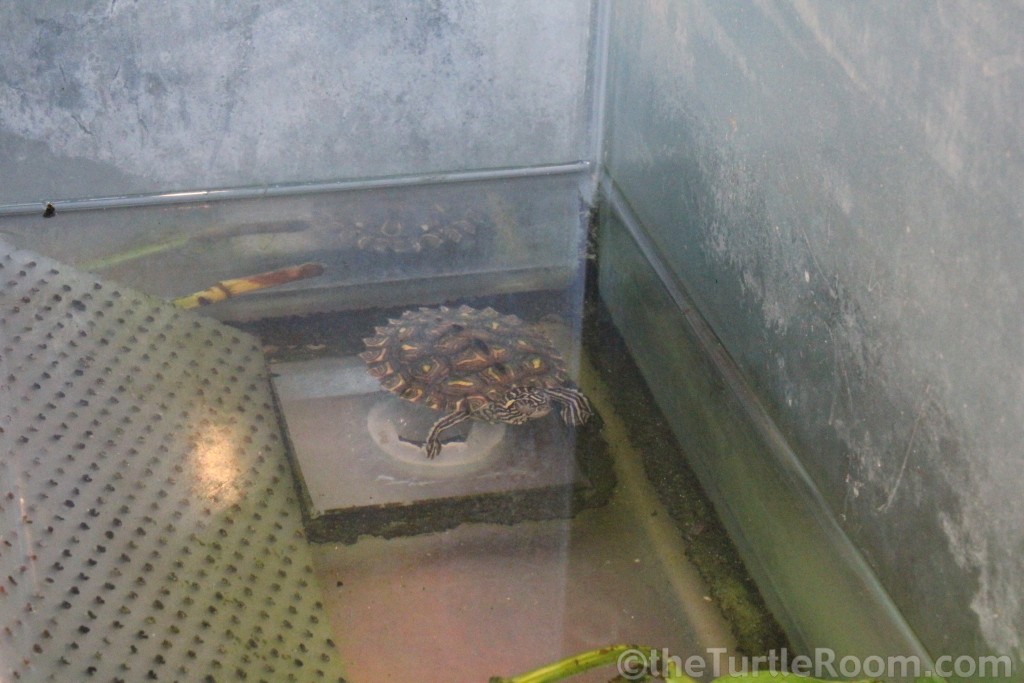 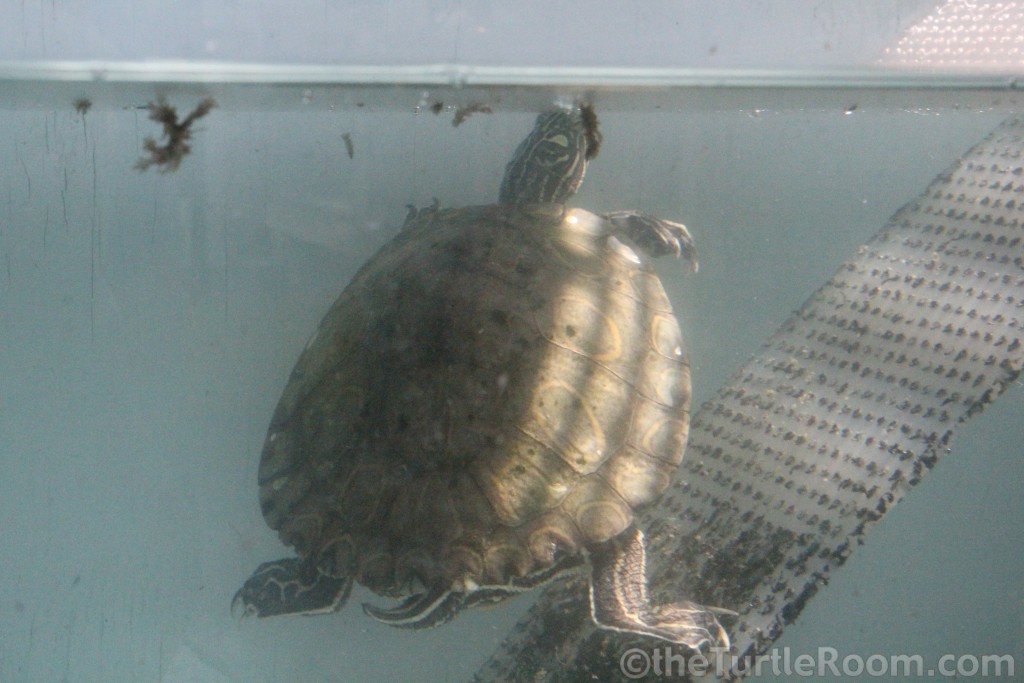 Much of the Chelonian conservation at Tennessee Aquarium is focused on their Asian Turtle Breeding Program, of which many of their animals are registered in SSPs. Due to habitat loss and animals being removed from the wild for the collection or pet hobby and the food industry, many of Asia’s turtles are threatened or endangered. Parts of this program are featured in exhibits, such as Mauremys japonica (Japanese Pond Turtle), Cuora trifasciata (Chinese Three-Striped Box Turtle), and Sacalia quadriocellata (Four-Eyed Turtle). However, most of the work really happens off-exhibit with these species and many others.

The Aquarium is a focal point for the conservation of the Four-Eyed Turtle as Bill Hughes, Senior Herpetologist, is the AZA SSP manager for this species. Sacalia quadriocellata is a small, semi-aquatic, endangered species native to China and small parts of Lao and Vietnam. The populations in Lao and Vietnam are much more stable than the main population in China. Like many of Asia’s turtles, this species has plenty of challenges to overcome to escape endangerment. Its stunning appearance has made it a frequently harvested turtle for the collecting trade. Usage of the shell bone for traditional Chinese medicine is also a culprit of the dwindling Four-Eyed Turtle population. 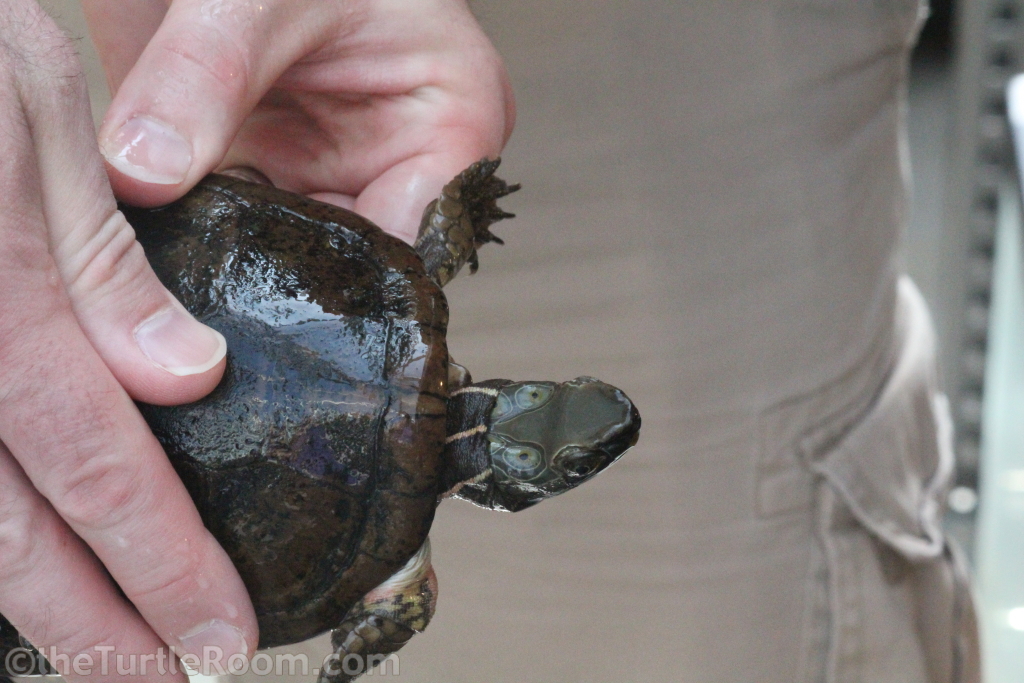 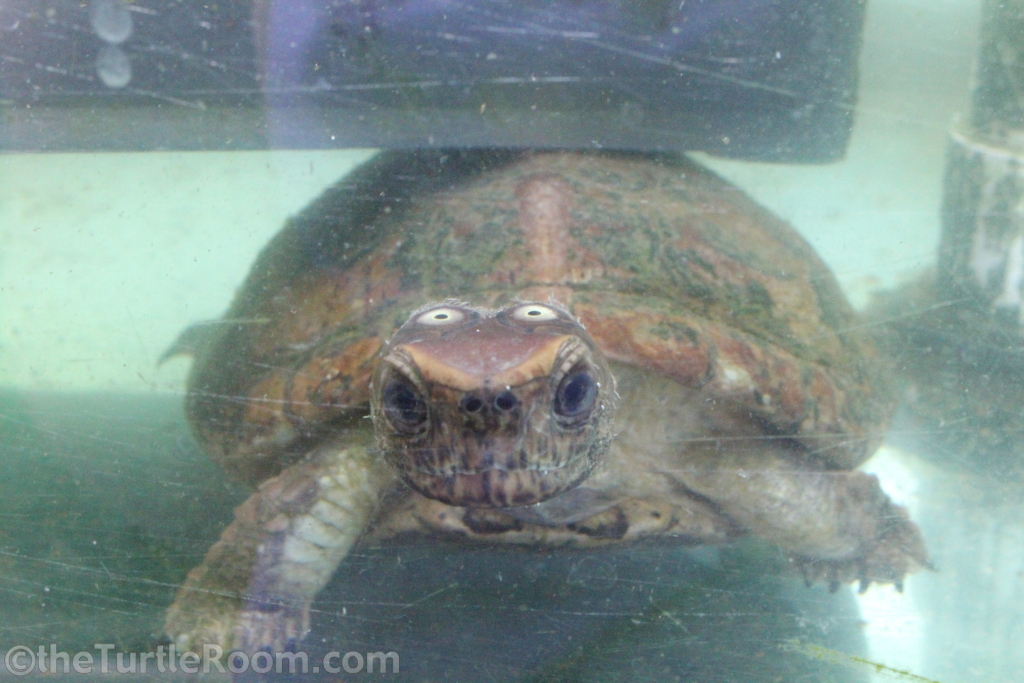 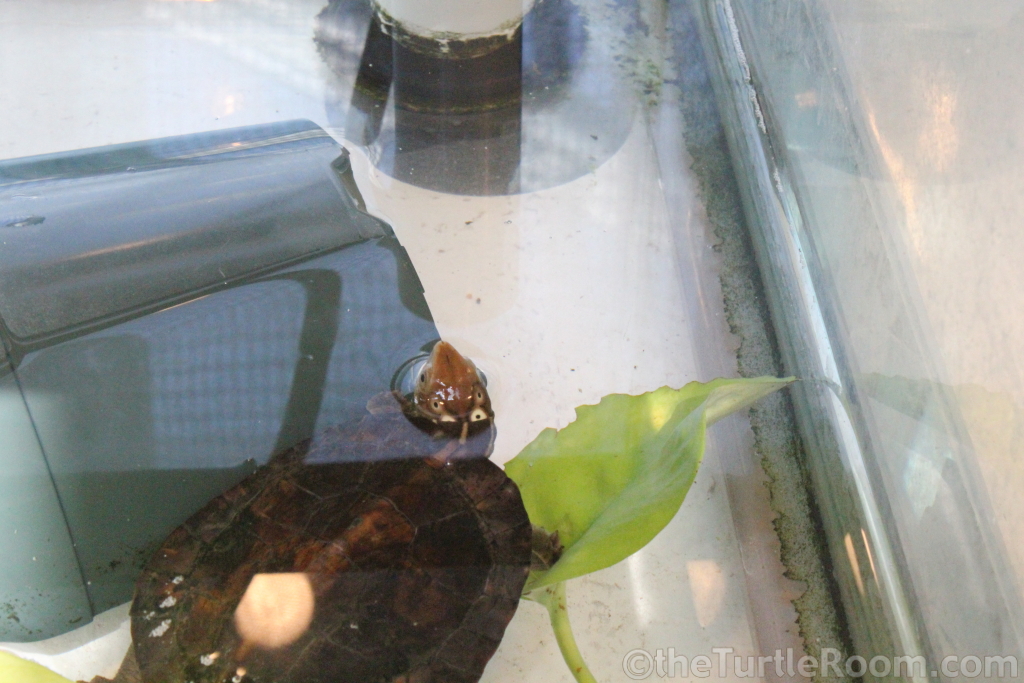 Bill also manages the SSPs for both Heoseyms spinosa (Spiny Turtle) and Heosemys depressa (Arakan Forest Turtle). Frequently, a yearling Spiny Turtle is on exhibit as a showcase of success, but the rest of these programs happen in the off-exhibit areas of the Aquarium. Bill is one of the leading experts on the species, and has been one of the most successful conservationists working with Heosemys spinosa, having a direct hand in the hatching of 20 Spiny Turtles! This species, while not easy to get to produce offspring, has shown more receptive to captive breeding efforts than the related Arakan Forest Turtle. At one point, the Arakan Forest Turtle was believed to be extinct, but was rediscovered less than 30 years ago and is now listed as critically endangered. Difficult to establish in captivity, conservation programs have had success at a slow pace with this species. Thankfully, a potential in-situ conservation area, that is both difficult to access and lacks human settlement, has been discovered in Myanmar. There is hope for the Arakan Forest Turtle. 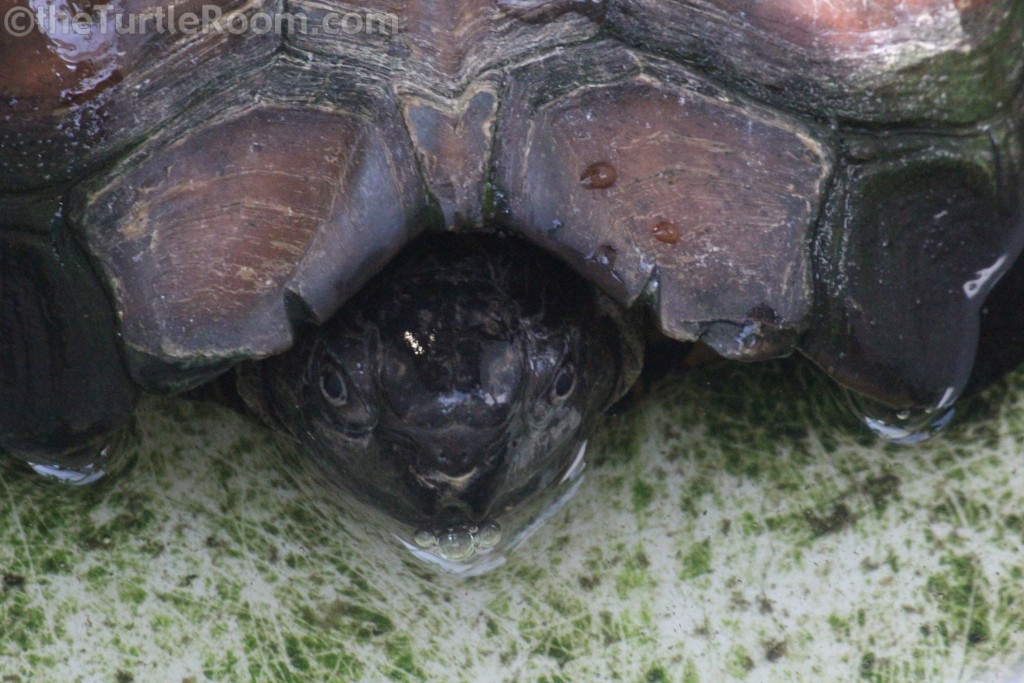 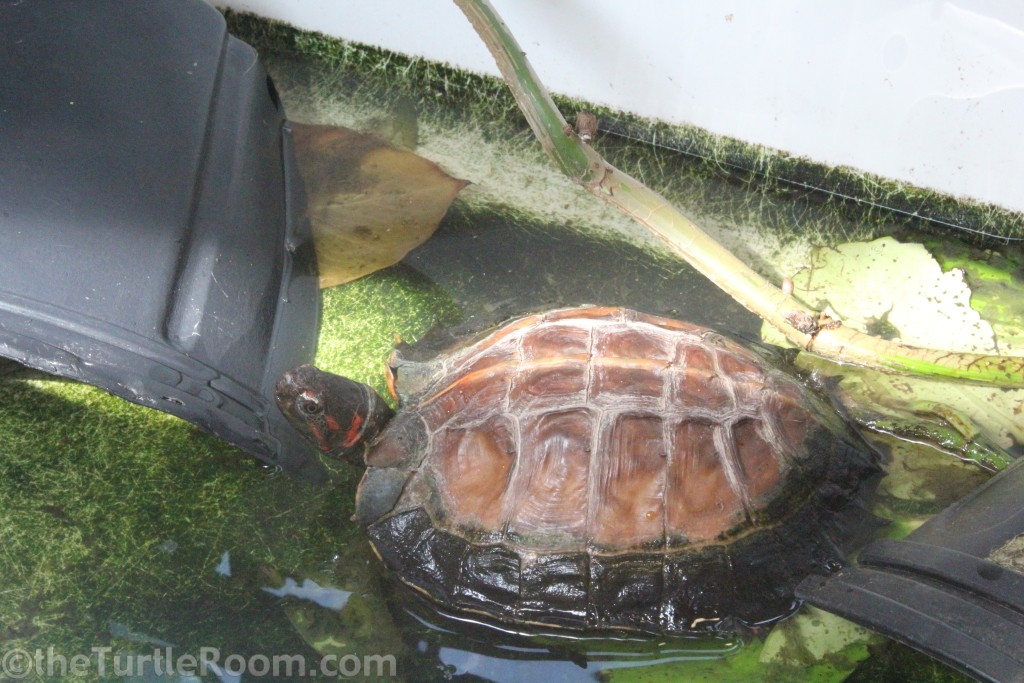 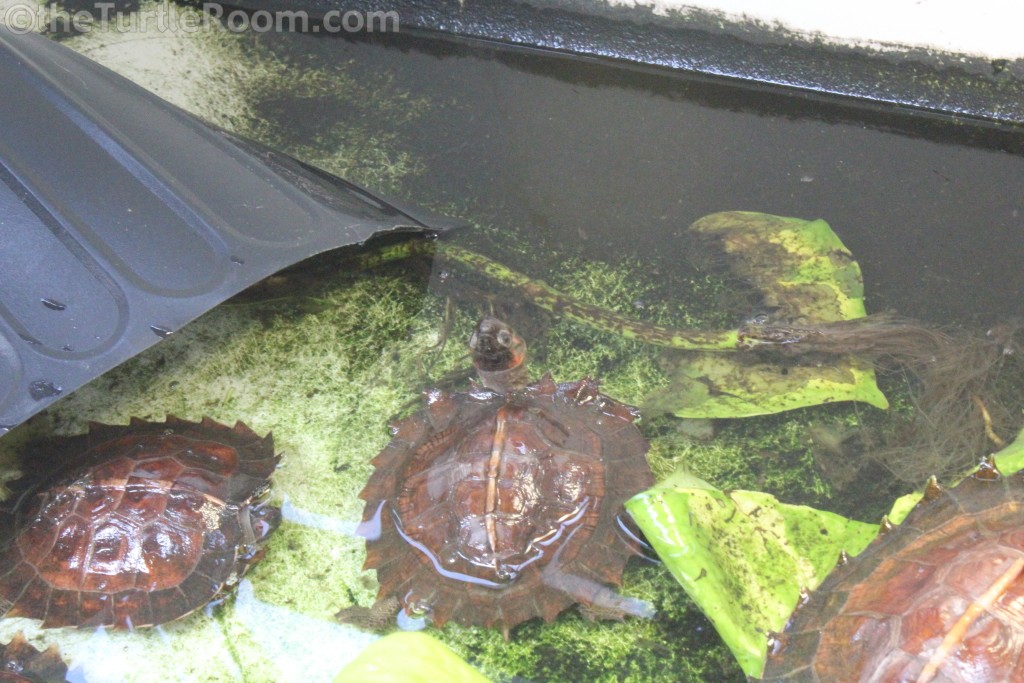 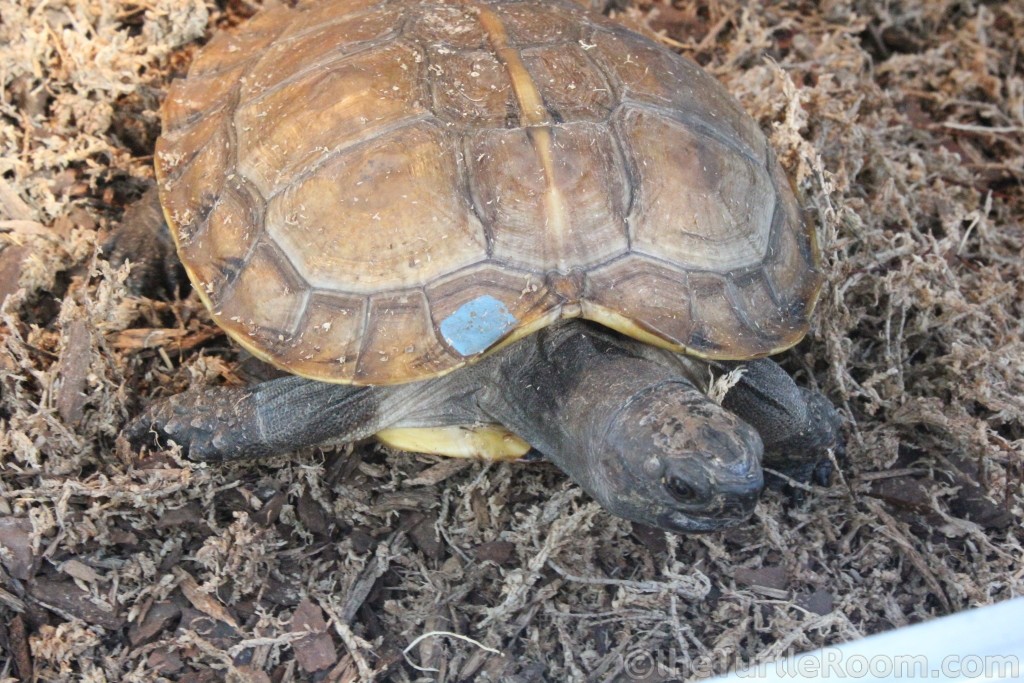 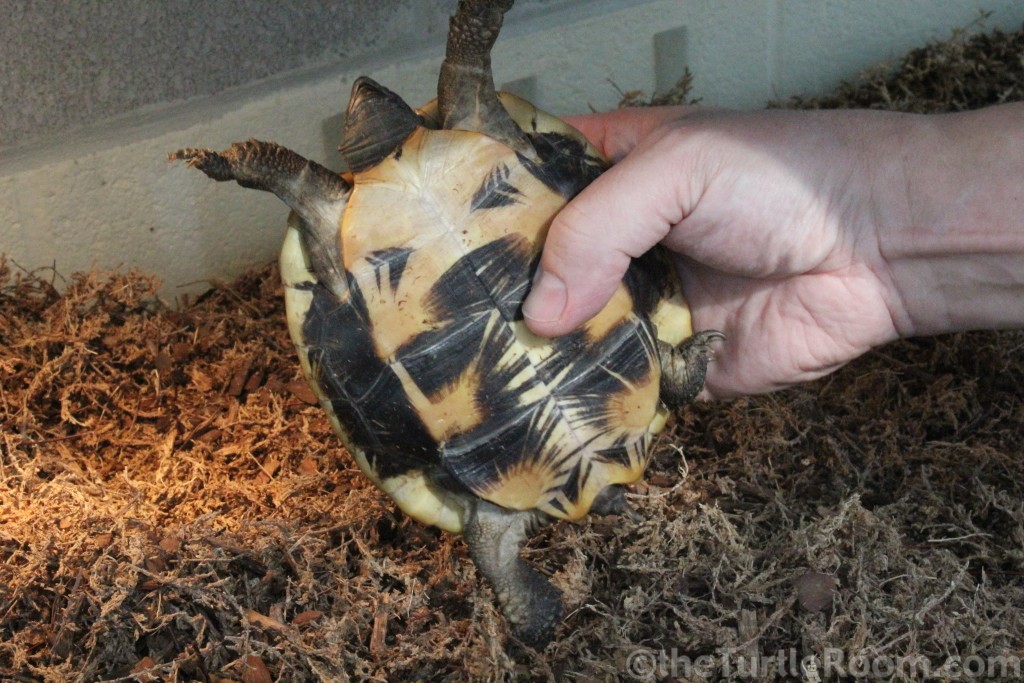 Another species which Tennessee Aquarium has been quite successful working with is Geoemyda spengleri (Black-Breasted Leaf Turtle), of which two eggs were discovered while we were visiting. Like many of the Asian species being worked with, this species is also classified as endangered and lives in southern China and Vietnam. The Aquarium’s main breeding group is off exhibit and currently consists of two males and six females; some of these turtles are on loan from other institutions (including Knoxville Zoo). However, on exhibit, you can see an attractive, personable female who was hatched and raised there in the Aquarium. 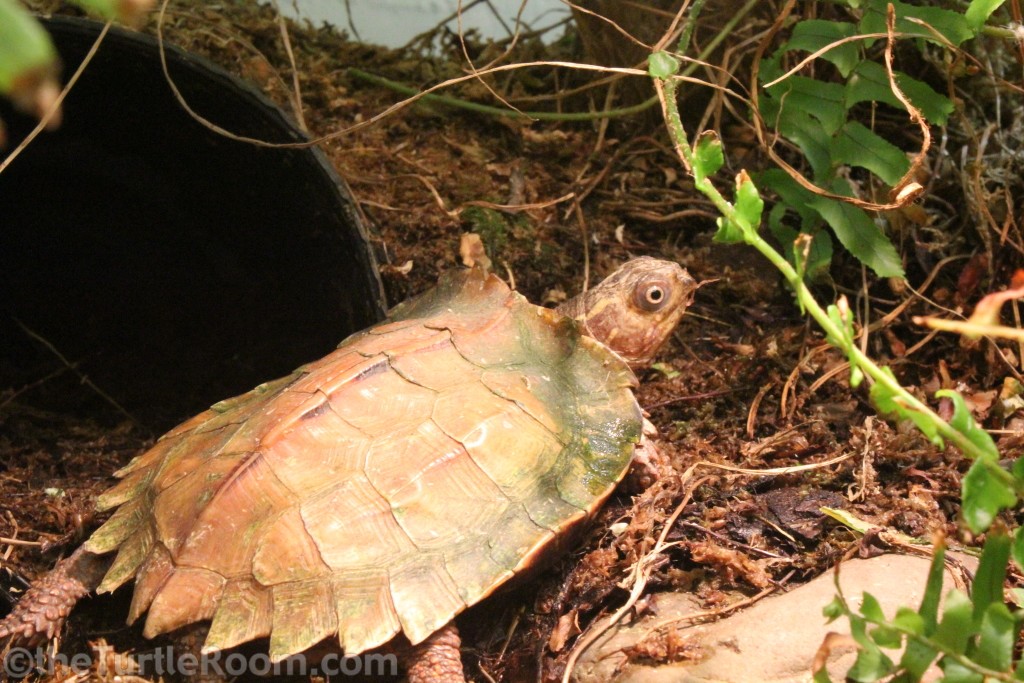 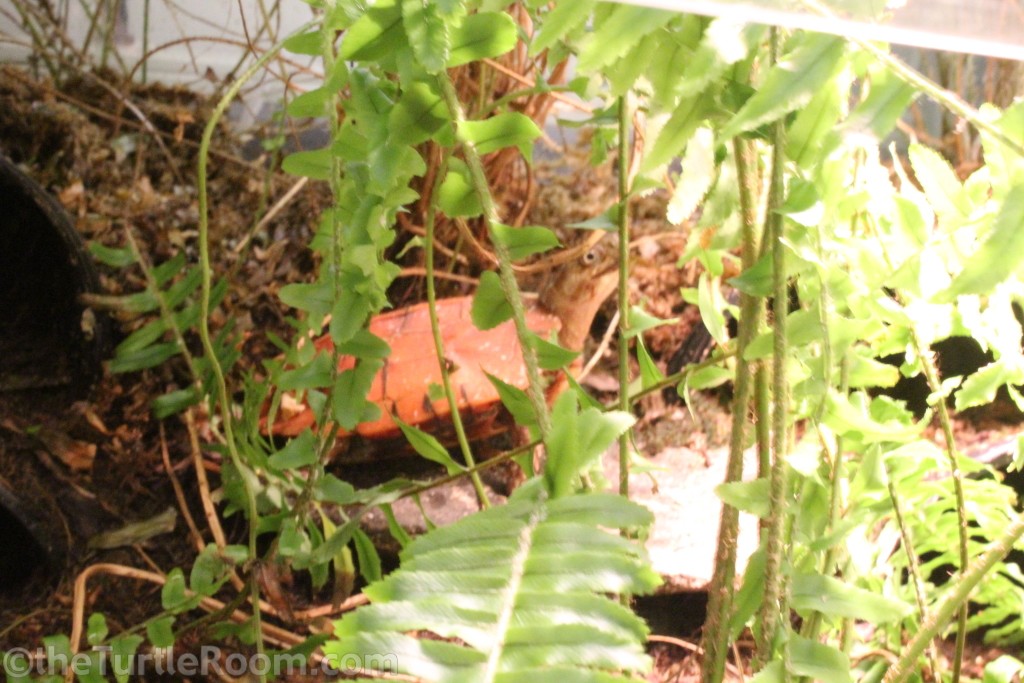 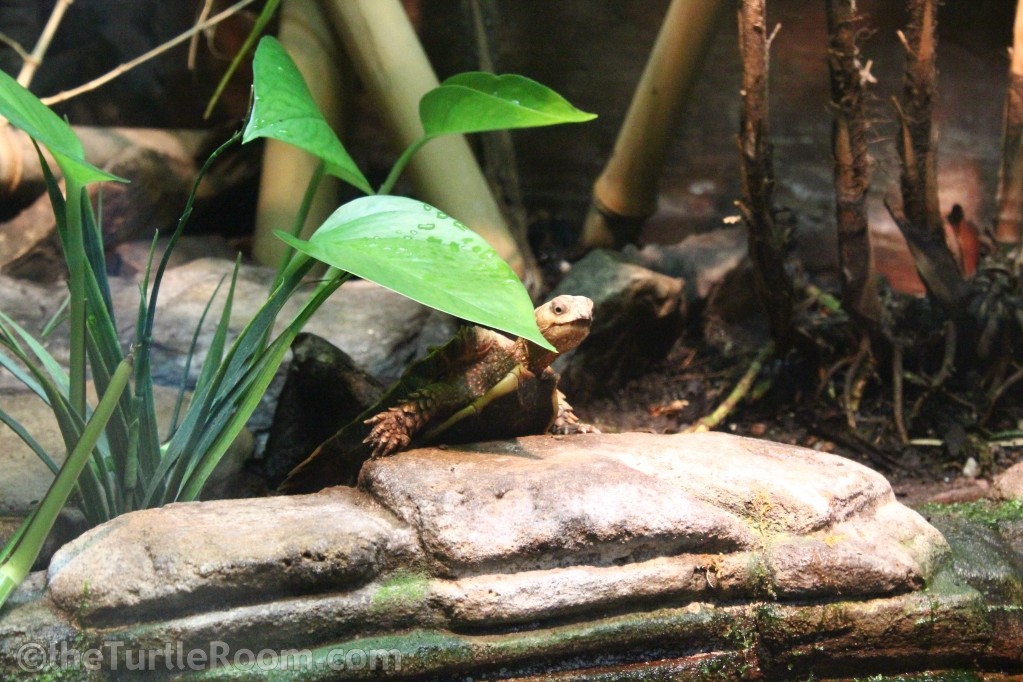 Other off-exhibit projects in the Asian Turtle Breeding Program include the beautiful Cuora galbinifrons (Indochinese Box Turtle), Cuora picturata (Southern Vietnam Box Turtle), Cuora mouhotii (Keeled Box Turtle), and many more Cuora trifasicata than are seen on exhibit. All are listed as critically endangered, except for C. mouhotii, which carries an endangered status. Listing the reasons for their endangerment is like a broken record: food trade, collecting trade, habitat destruction, and traditional medicine. 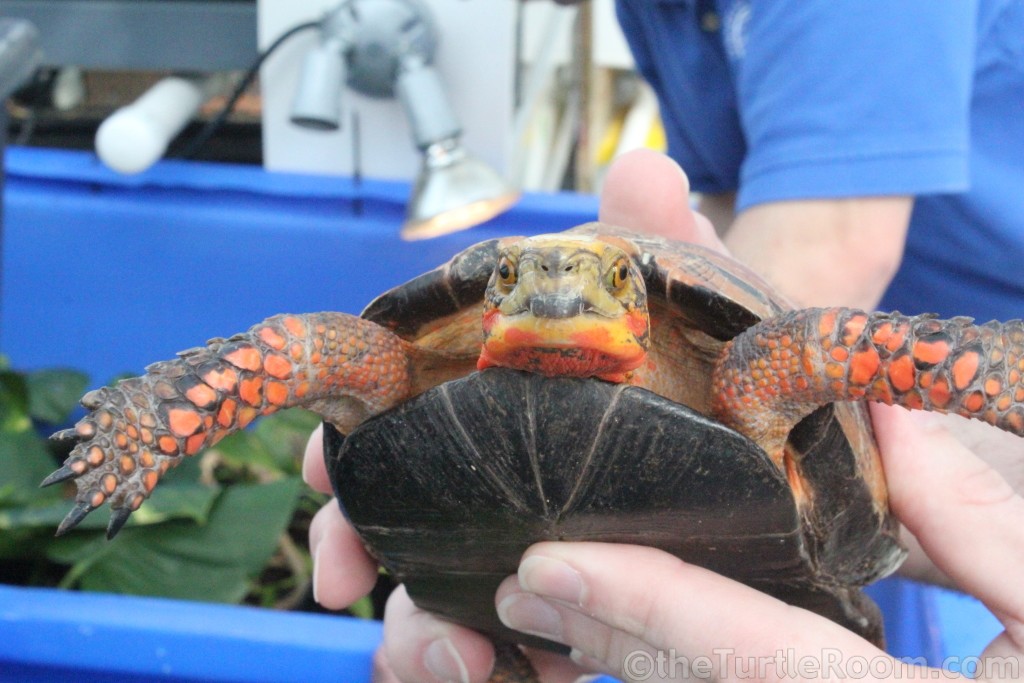 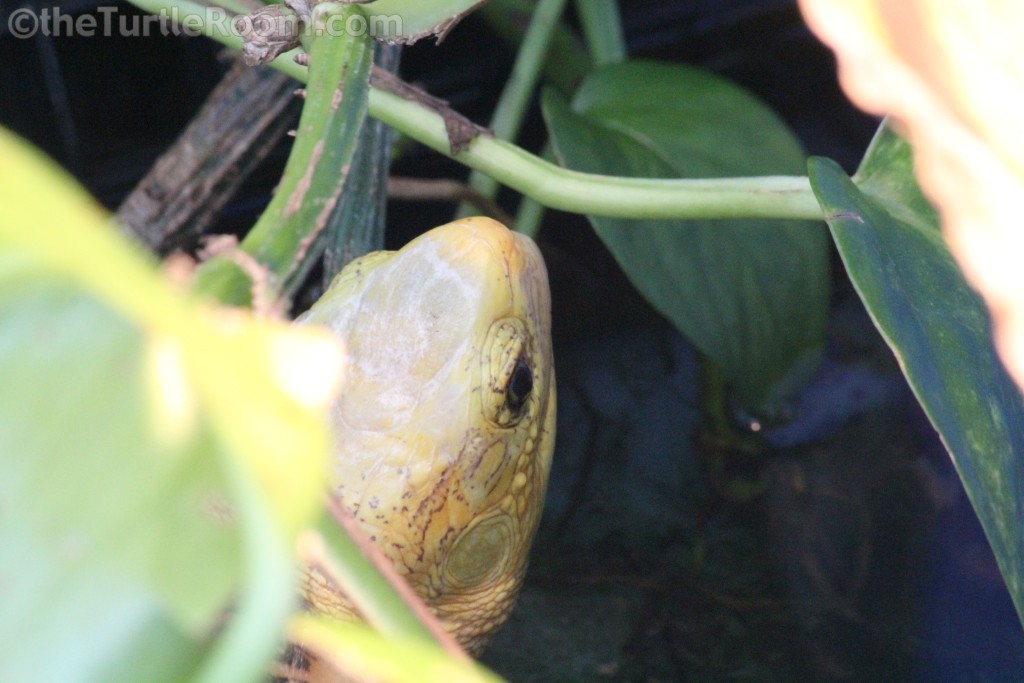 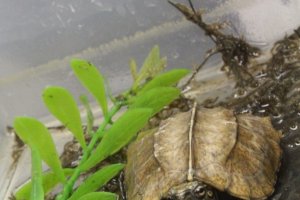 Through these programs, the Tennessee Aquarium and their staff work hard in the conservation effort of these species and more. We believe in the work they do and hope to continue the relationships and partnerships we’ve developed with them. We hope you will join us in supporting the Tennessee Aquarium through a donation, membership, or simply a visit.

Special thanks to Bill Hughes, Senior Herpetologist for inviting us in and showing us Tennessee Aquarium’s off-exhibit collection and breeding program. Please visit Tennessee Aquarium’s website to learn more about their efforts and donation/membership options. To see the best of our visit through the off-exhibit areas and parts of the River Journey building: Full Gallery

*All photos taken by Lisa and Steve. Image of the Lake Sturgeon courtesy of Tennessee Aquarium.