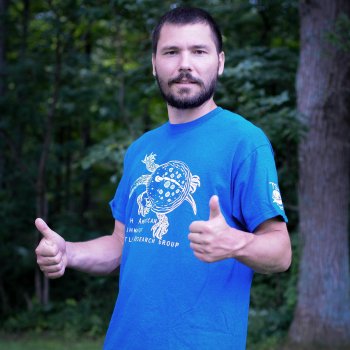 Andy Weber serves as Director of Field Programs for theTurtleRoom (tTR). He is in charge of project development, logistics, fieldwork, and permitting. Together, Andy and Steve (tTR Executive Director) co-lead turtle surveys in Pennsylvania. He plans to become more involved with the Terrapin Nesting Project: Leeds Point, which is led by Casey (tTR Protocol Manager / Field Project Manager) and Chris (tTR Director of Animal Husbandry) Leone in New Jersey. He also hopes to see other field projects get off the ground.

Andy lives in Honesdale, PA with his wife Jess, daughter Laurel, turtles, cats, and dog. Andy works for the National Park Service at Upper Delaware Scenic and Recreational River, with part of his job also helping with long-term ecological monitoring at several other National Park units in New Jersey, Pennsylvania, and West Virginia.

Andy received Associate’s and Bachelor’s Degrees from Penn State University in Wildlife Technology and Wildlife and Fisheries Science, respectively. After college, he attended Tennessee Technological University for his Master of Science in Biology, where his work focused on sampling methods and basking behavior of turtles in a small lake.

In 2003, while a student at Penn State, Andy took a field biology course taught by Dr. J. Brian Hauge. Part of this course was spent in Florida surveying turtles in a spring ecosystem mainly by snorkeling and hand-capturing. Needless to say, he was pretty much hooked on turtles at that point! The project continues to this day and has since expanded and joined with Turtle Survival Alliance. The group is now known as Turtle Survival Alliance-North American Freshwater Turtle Research Group (TSA-NAFTRG). Andy currently serves as Associate Researcher for this group which collaborates with theTurtleRoom for the Pennsylvania surveys. Two other students in that 2003 class were TSA-NAFTRG Director Eric Munscher, as well as his wife Jess!

Andy also volunteers as the Wayne County coordinator for the Pennsylvania Amphibian and Reptile Survey (PARS). This atlas project will greatly increase distributional knowledge and inform status designations for all species of amphibians and reptiles in Pennsylvania.

Currently, Andy keeps Russian Tortoises (Testudo horsfieldii) and Striped Mud Turtles (Kinosternon bauri). In the past, he has kept a few other species such as Painted Turtles (Chrysemys picta) and Pond Sliders (Trachemys scripta). He looks forward to getting more involved with the captive husbandry side of theTurtleRoom as well.

One of his favorite things to do is to get out and explore nature with his family. They love to visit state parks, forests, and other natural areas. Andy and Jess are trying to raise Laurel to have an appreciation for nature, with a strong emphasis on turtles of course!