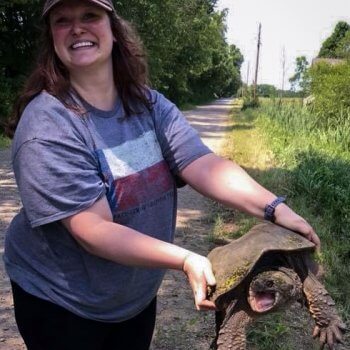 Kaylin is among the newest members of theTurtleRoom and brings a museum and fundraising heavy background to her fellow turtle nerd cohorts. Being the first of her family to go to college, Kaylin obtained her B.A in Anthropology in 3 years at The University of Oklahoma and her M.Sc. degree at the University of Leicester, England in Museum Studies.

Kaylin has worked at the following museums:

She first became heavily involved with turtles at the Carnegie Museum of Natural History as Curatorial Assistant of Amphibians and Reptiles. Kaylin updated all scientific names of Testudines and Sauria in the collection and studied Temperature Dependent Sex Determination in turtle hatchlings from Dr. Ewert’s life studies.

After having completed her National Science Foundation grant at the museum, Kaylin moved on to a Pittsburgh Foundation handling $45 million in grants and fundraising for a homeless shelter in East Liberty, Pittsburgh. She hopes to expand tTR’s donor and foundation base with her fundraising efforts.

Her favorite turtles are snapping turtles! Chelydra serpentina and Machrochelys temminckii. Anytime she has to name a character in a video game, she names them Chelydra.

You can see some of Kaylin’s previous work on temperature-dependent sex determination on YouTube.