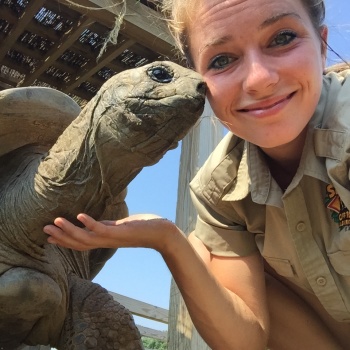 Casey Leone serves as a Field Project Manager for theTurtleRoom, focused on running the Terrapin Conservation Initiative. Casey has worked as a zoo keeper and agriculture specialist at Six Flags Safari, working with many different species both marine and land. Using positive reinforcement, animal training plays a large role in her position at work. She is able to work hands on with a wide array of species that include Giant Anteater, Giant Aldabra Tortoise, Macaws, Brown Bear, Coatimundi, Barn Owl, and many more. Her daily experiences involve training sessions and observation, enclosure maintenance, record keeping, preparing and administering daily diets, and educating the public in global conservation and facts about the animals she works with. In combination with her love for animals, Casey will also be designing and maintaining a large garden, using recycled material, to both feed and enrich the lives of many different species at the safari.

She also has a background in horticulture having worked as a floral and landscape designer for years. Casey is accomplished in various horticulture and landscaping disciplines as well as managing and caring for a large vegetable garden and greenhouse. She has helped design, maintain, and install a large themed topiary display for the annual Philadelphia Flower Show.

At home, she is second in command at Garden State Tortoise, with her husband Chris. Together they maintain over 50 different species and subspecies of turtles and tortoises from around the globe. Her current project is raising Chelonoidis nigra and Aldabrachelys gigantea. In full support of her husband, she aids in dedicating her home and life to one of the most diverse collections of chelonians. General care and maintenance along with helping her husband to keep detailed records on the health, breeding, and incubation of specimens are just some of the things she has committed herself to. In 2015, one of theTurtleRoom’s conservation projects with Terrapene coahuila reached first time breeding success thanks to Casey’s efforts in paying attention to detail and successfully removing eggs for artificial incubation. Some of her favorite species include Chelonoidis nigra, Aldabrachelys gigantea, Manouria emys ssp., all Terrapene species and subspecies, Cuora mouhotii ssp., Glyptemys insculpta, and Emydoidea blandingii.