Testudo hermanni hermanni is one of two currently recognized subspecies of the European Hermann’s tortoise or “Mediterranean spur-tailed tortoise”. Also referred to as the Italian tortoise, an attempt has been made to elevate this chelonian to full species level (Eurotestudo hermanni, 2006) but it has not yet been accepted. At an SCL length of 5 to 7″ for females and 4 to 5.5″ for males, Testudo hermanni hermanni is on the smaller end of the size spectrum for Hermann’s tortoises. Larger examples do exist. The carapace is rounded or oval in shape with minimal flaring of the marginal scutes except in males and some specific localities. The ground color is a vibrant yellow or gold, sometimes with an orange or greenish hue. Bold, well defined black markings accompany the ground color which create a striking contrast. The highest point of the carapace is typically situated between the second and third vertebral scutes or between the third and fourth. The first vertebral scute usually sports heavy black pigment covering most of the area and the fourth vertebral almost always has a black central marking that may or may not be attached the bordering black pigment of the scute. The fifth vertebral scute exhibits a more or less defined marking that is reminiscent of a keyhole or mushroom cloud. This marking is subject to high variation but is a main trait belonging to these tortoises. The supracaudal shield is always divided. The plastron is lacking any hinge and features the same ground color as the carapace. Along the mid-line, two, longitudinal black stripes run downward forming distinct “bands”. The bands are continuous and may or may not be slightly broken at certain points. They span from the humeral scutes to the anal scutes. Disjoint black spots or small patches may be found on the gular scutes in some specimens. The suture found where the pectoral scutes join at the mid-line is shorter than that of the suture between the femoral scutes. Inguinal scutes are typically present. The head of T. h. hermanni is sleek with regular contours. A yellow subocular patch is found just under and behind each eye. It is more pronounced in young animals (also more obvious in certain localities) but many carry it throughout their entire lives. Yellow flecks or scales may or may not be found on the top and back of the head. Skin color in general varies from yellow to gray along with nail color that is usually light but occasionally dark.

Testudo hermanni hermanni is found in several areas of mainland Italy along with the islands Sicily and Sardinia. In Spain it occurs in Catalonia and on the Balearic islands, Majorca and Menorca. In France it is restricted to the south (Varoise) and the island of Corsica.

These tortoises are found in areas comprising of low lying shrubs and grasses which become quite dense. Sun drenched “warm spots” on well drained ground that is rich in calcium make up a classic habitat for Western Hermann’s tortoises. Coastal areas and even Mediterranean forest are also occupied depending on the region in which they are found. Occasionally they will cool off in a very shallow stream and may become active during or after rain.

These tortoises spend much of their active season grazing on edible weeds and plants that make up their habitat. They do not consume any animal matter and require a diet low in protein. Reports of tortoises eating snails have surfaced but this may be attributed to the need for calcium from the snail’s shell and nothing more. They also do not eat fruit unless they accidentally stumble upon it.

In many parts of their range, Testudo hermanni hermanni may hibernate from November to March or April. In some areas (Sicily & Majorca, for example) the hibernation period may be much, much shorter. During the active season, the tortoises will venture out of their overnight hiding areas to warm up under the bright European sun in early morning. They will then graze until the temperatures begin to soar to a dangerous level and retreat under brush or nearby foliage. They may resume grazing later in the day before sunset. The tortoises have an incredible sense of direction and “know” their home range. They will use the same paths and tunnels every day that they have created through the undergrowth and dense vegetation. While they are designed to thrive in the sunlit Mediterranean, they become quite stressed and vulnerable when out in the open. They can sense their vulnerability and will scurry quickly to jam themselves under a shrub to avoid being seen. The intricate black and yellow patterns of their carapaces enable them to remain hidden under the brush. Once still, it can be nearly impossible to see them.

Peak breeding activity normally takes place in late summer-early fall and again in spring. The male will relentlessly pursue the female until she submits to his advances. He will chase, ram, bite, scratch and even overturn her. During copulation, the male emits high pitched squeaks while sticking his tongue out of his gaping mouth. Females will seek out suitable nesting areas in May and June. They nervously and continuously pace and search for the right spot. Once oviposition takes place, the mother tortoise uses her back legs to dig a well formed, flask shaped nesting chamber roughly 3-4″ deep. She then deposits 1 to 3 eggs (sometimes 4) and covers them. She may lay 1 to 2 more clutches in a given season. Between 70 and 120 days (53-70 in captivity at between 86 and 91F) the tiny neonates emerge from their underground fortresses and begin their fragile lives. Many are picked off by predators immediately and few survive to adulthood. 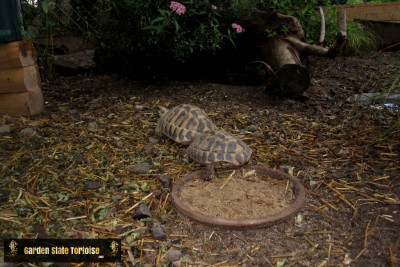 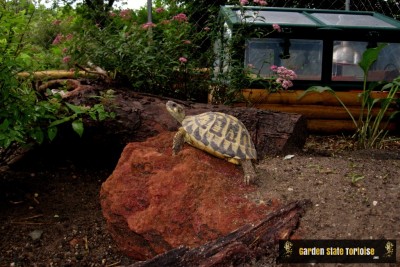 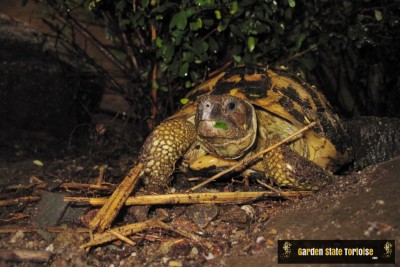 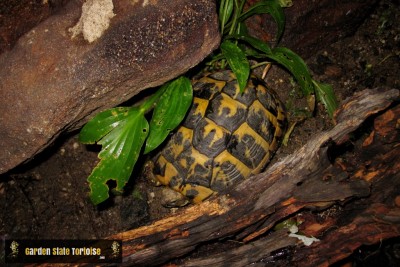 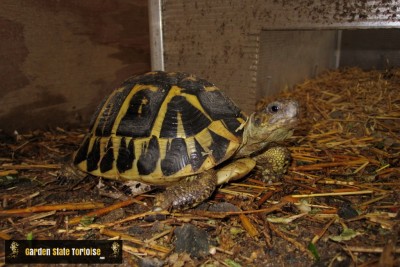 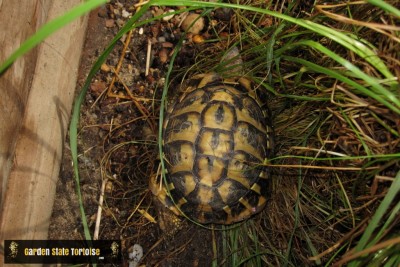 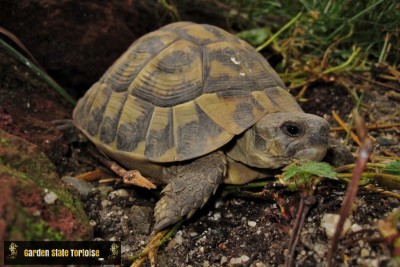 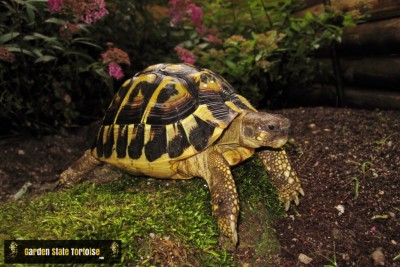 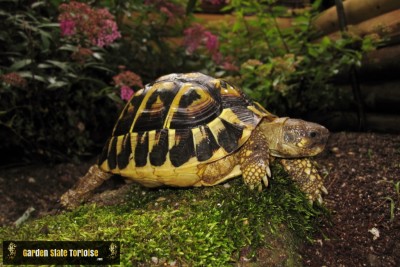 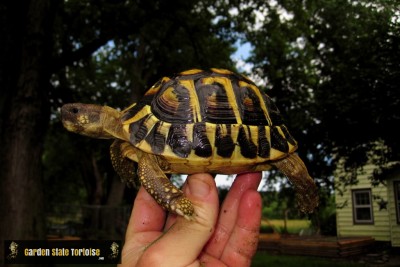 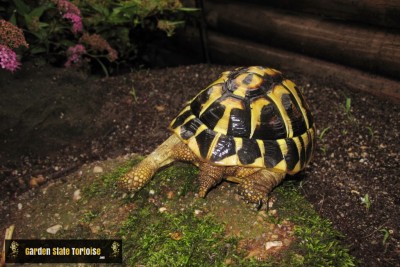 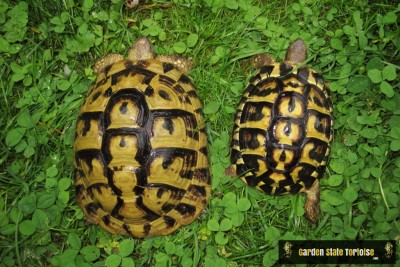 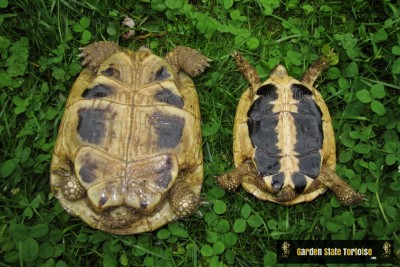 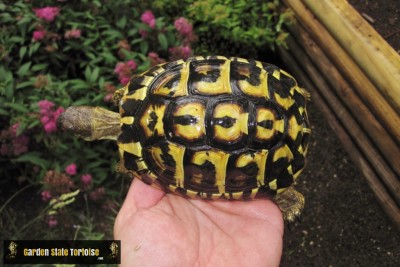 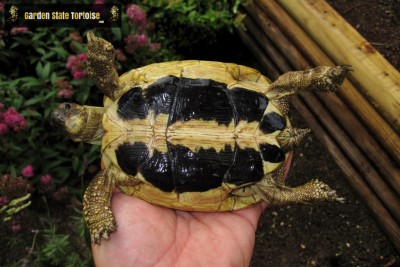 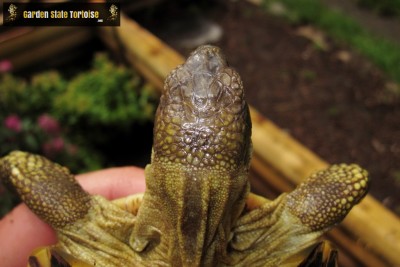 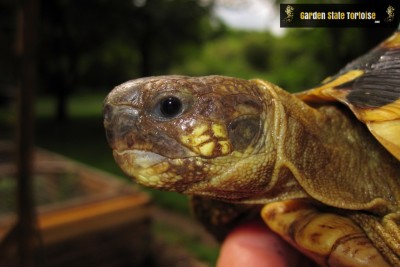 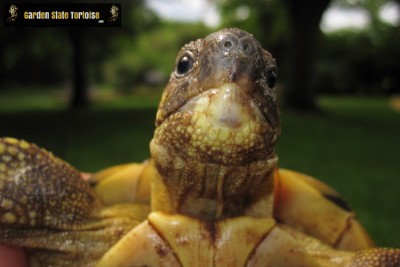 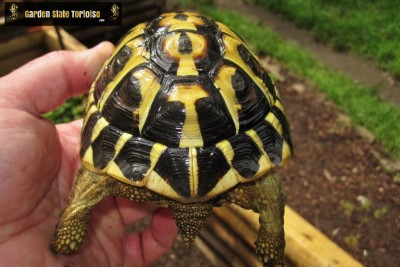 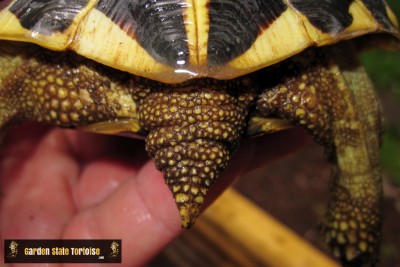 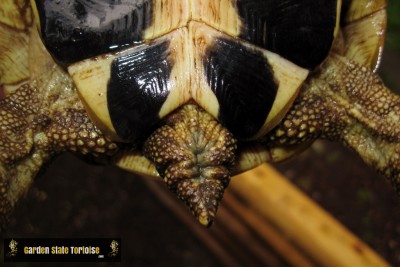