The Zambezi Flapshell Turtle, Cycloderma frenatum, is a large turtle from Southeast Africa, reaching an adult size of approximately 56 cm (22 in) and a weight of 14 kg (31 lbs). This turtle usually has dotted markings on its green to brown skin. The plastron is fairly large and is somewhere between white, yellow or pink in color, with two darkened areas around the umblicus and cloaca. There are seven areas on the plastron where the skin becomes thickened with growth, which can be immediately discerned when the turtle is viewed from below. The head is moderately sized, with the eyes placed at the top. The head has lines running from the orbits to the base of the neck; markings that disappear with growth.

The Zambezi Flap-Shelled Turtle is native to East Africa, being found in Tanzania, Mozambique, Zambia and Malawi. It may also be found in Zimbabwe, which is unconfirmed.

Cycloderma frenantum prefers sandy substrates rather than muddy. It can be found in rivers, streams, lakes and swamps.

Cycloderma frenatum is a carnivore. Some sources site a diet including many snails and mussels. Others gives credit to C. frenantum as an expert fish-catcher that only eats mussles when fish are not available. The same journal describes the hunting technique like that of the turtles belonging to the genus Chitra, but with less snapping speed.

While hunting, juvenile C. frenatum lay completely concealed in the sand with only the eyes exposed, while adults move slowly towards prey, both lunging quickly when items enter striking distance. This may help explain the placement of the eyes atop the head of C. frenatum. On calm days, as many as a dozen adults have been seen floating on the surface of the water, a form of submerged basking.

This fast moving, fully aquatic species is listed as Near Threatened by the IUCN Red List, which was determined in 1996 and requires updating. Very little is known about the natural history of this species, it is possible that it is on the decline in areas due to its frequently being caught in fisherman by-catch and the excavating and consumption of nests in areas with higher human populations. However, there is currently no data regarding commercial harvest or international trade of this species.

In captive situations, juveniles often refuse basking areas. Adults may try to excape their enclosures following rains. These turtles can be fed whole fish, mice, and prepared turtle diets. They should be kept with floating aquatic vegatation and a sandy substrate.

Cycloderma clutches are laid between December and April and include between 15 and 25 eggs. Females come ashore at night and dig shallow nests under the shade of trees or bushes. The eggs are sphere-shaped and have a hard shell. There may be several clutches in a season and the eggs do not hatch until the following year, after a long incubation period. The eggs measure 32 x 33 mm. 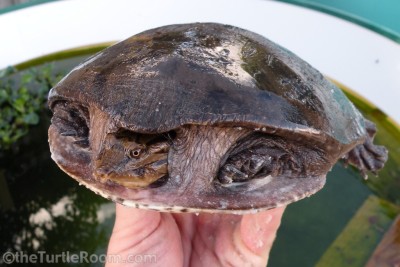 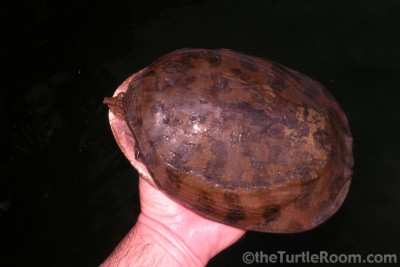 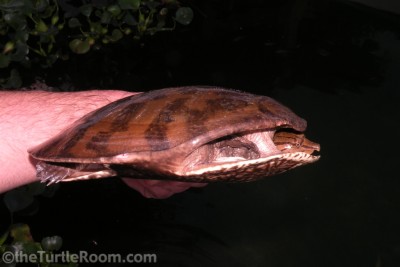 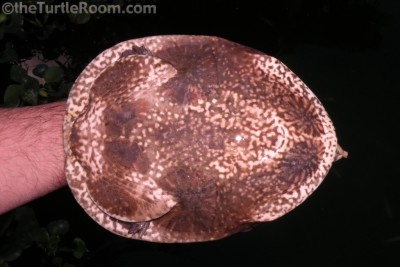 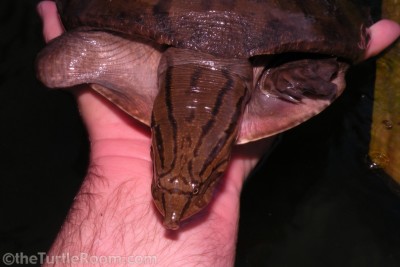 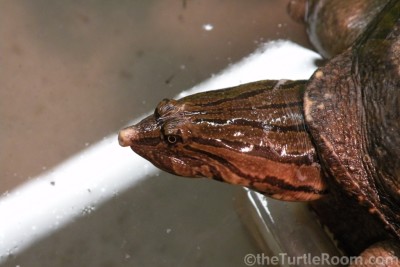 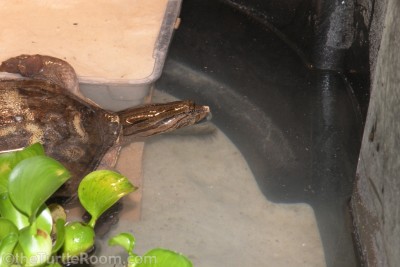 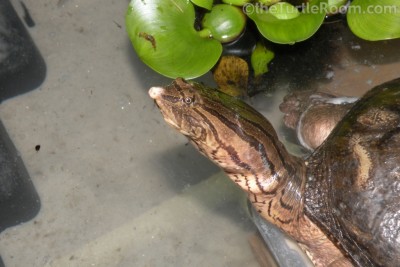