The Pacific Pond Turtle is a small to medium sized turtle, reaching a record of 24.1 cm SCL. This turtle has a low carapace and usually a pattern of spots or lines that radiate from the centers of its scutes. The pattern can closely resemble that of European Pond Turtles (Emys orbicularis). The term marmorata, meaning marbled, also refers to the pattern on the carapace. The carapace is smooth and it is widest behind the bridge, and keel-less. The coloration of the carapace can vary greatly, with olive, dark brown, gray, or black versions, which may be patternless in some individuals. The skin is gray, with some pale yellow on the neck, chin, forelimbs, and tail. The head is plan or reticulated. In males, the plastron is concave and in females it is flat. Males have the anal vent situated posterior to the rim of the carapace. In females, it is anterior to the rim. Males have lighter throats, while females tend to have more heavily patterned carapaces.

Actinemys marmorata now ranges to the west of the Cascade-Sierra crest from extreme Washington to northern Baja California. Isolated colonies have been reported in the Truckee and Carson Rivers and possibly the Humbolt River in Nevada and also in Puget Sound and the Columbia Gorge of Washington. These populations are small, and that of Truckee may be gone all together. It is unknown whether the Nevada population may have been native or introduced from elsewhere. Their origin remains unresolved according to recent molecular studies. Scattered records in other areas likely represent introduced individuals as well.

The species was collected in 1933 and 1936 and last reported in British Columbia in 1966. It is thought that those Pacific Pond Turtles found in British Colombia were released captives, originally from the United States.

The Pacific Pond Turtle occupies a wide variety of habitats, including rivers and streams, lake, ponds, reservoirs, permanent and temporary shallow wetlands, gravel pits, stock ponds, and sewage treatment lagoons. In streams, slower moving pools are the preferred habitat. Pacific Pond Turtles have also been collected from brackish waters. The species is usually uncommon at elevations above 1,500 m. Optimal habitat seems to typically include the presence of adequate emergent basking sites and vegetation, and the presence of suitable hiding places in the form of undercut banks, submerged vegetation, mud, rocks and logs.

Terrestrial habitat may be just as important to the Pacific Pond Turtle as aquatic habitat. In some populations males utilize terrestrial habitat for some part of 10 months annually, while females are on land during some of all months because of nesting and overwintering activities. The availability of terrestrial shelter sites may be necessary to provide protection from predators, floods, desiccation, thermal extremes, or some combination thereof.

Actinemys marmorata is a generalist feeder. Most food is obtained by oportunistic foraging or scavenging, but modified filter feeding (neustophagia) may also be used for capturing smaller, more plentiful foods at the water's surface. These turtles will also carry food items into water for consumption. Known foods are algae and other plants, snails, crayfish, daphnia, isopods, insects, spiders, annelids, fish, and frogs. Fish and other vertebrates are consumed rarely and may be ingested as carrion only. The diets of males, females and of juveniles differ in prey size and proportions of prey items, which may reduce competition between the sexes and age classes. Males consume more insects and vertebrates than females, who eat more algae, and males seem to prefer larger food items. Juveniles eat smaller foods such as nekton and the larvae of small aquatic insects and other invertebrates.

Diurnal and aquatic, this turtle is often seen basking above the water, but will quickly slde into the water when it feels threatened. The seasonal activity of Pacific Pond Turtles varies geographically, and these turtles may be active every month at some localities. Hibernation and aestivation are often spent in terrestrial environments, but not necessarily by all Pacific Pond Turtles. Turtles in streams along the central California coast depart from drying streams during late summer, returning after winter floods after spending an average of 111 days in terrestrial locations. Terrestrial microhabitats occupied typically include riparian thickets of willows and other shrubs such as poison oak and coastal sage scrub, as well as woodlands characterized by coast live oaks and Monterey pine. All terrestrial sites tend to have dense accumulation of leaf litter. During water drawdowns, Actinemys marmorata seeks out remaining pools of water, attempts to move upstream or downstream, buries itself in soft water bottoms, or takes refuge in beaver or muskrat burrows.

The daily activity period of Pacific Pond Turtles consists of a period of foraging (0530-0800 hours) followed by a period of basking from 0800 hours to sundown, with most basking occurring between 0900-1000 hours. At other times, the turtles will remain inactive in the water or forage. Aggressive behavior may be displayed by a basking Actinemys marmorata toward approaching turtles. Most common is an open mouth gesturing which the turtle displays its yellow jaws and pink mouth lining. Other turtles usually pull in their heads and/or slide into the water when such a gesture is directed at them. Adults emerging to bask sometimes direct such gestures at juveniles already occupying good sites. If the gesture does not work, some turtles bite or ram the other turtle to push it off its basking site. Most basking aggression takes place some time before noon (0900-1159 hours).

Limited information exits on the reproduction of Pacific Pond Turtles compared to that available for many other North American freshwater turtles. The size and age of first reproduction varies geographically. In southern California, females begin laying eggs at a SCL of more than 11 cm and are at least 6 or 7 years old. Farther north, on the Rogue River of Oregon, the smallest reproductive females recorded have been greater than 13 cm and are likely 10 to 12 years old.

In Southern California, courtship has been observed in the field in early November. Copulation in the wild has been seen in April, May, June and late August. The nesting season extends from late April through August, depending on the latitude. The peak nesting period is late May to early July. Nests are usually located along stream or pond margins, however, nests have been found from 3 to 402 m distant from the water. Full sunlight seems to be a requirement for nesting sites. Some females may lay two clutches in a year while others may lay eggs every other year. Clutches usually range from 2-11 eggs. 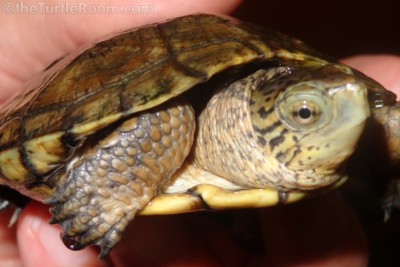 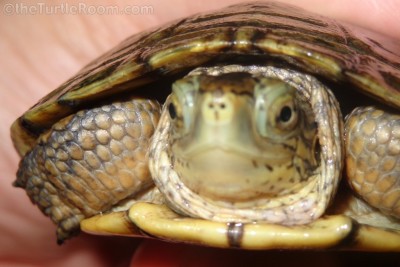 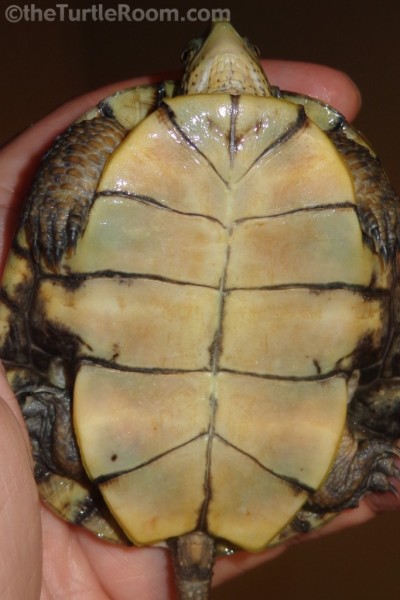 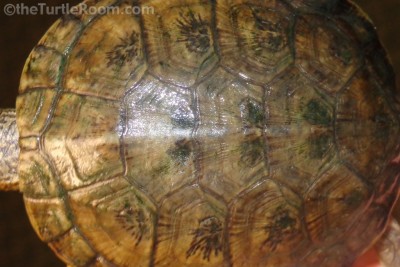 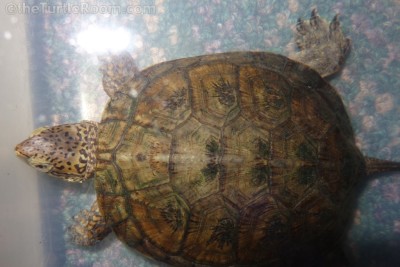