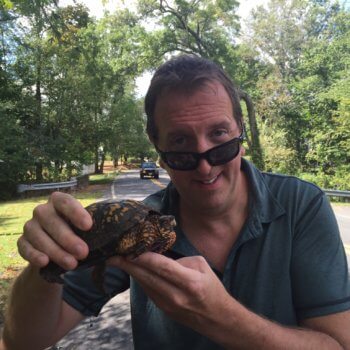 Scott is a Conservation Husbandry Specialist for theTurtleRoom. Scott has been working with reptiles and amphibians since childhood. His keen interest in chelonians started early and he was lucky enough to have parents that donated their time taking Scott looking for herps in the field, scouring every pet shop in the New York area and visiting zoos, museums and aquariums. Scott was inspired by the writings and work of Gerald Durrell at a young age and recognized the value of assurance colonies and captive breeding as an active ex-situ conservation tool. Scott has a degree in Biology and worked as a wildlife educator at the Turtle Back Zoo in West Orange, NJ.

Scott is a member of The New York Turtle and Tortoise Society, the TTPG and the TSA. His avocation is to do his part in the conservation of endangered chelonians. Scott is also a founding board member of The Anxiety and Depressions Initiative, a 501c3 organization that promotes the benefits of an active and healthy lifestyle while living with anxiety, depression and related disorders.