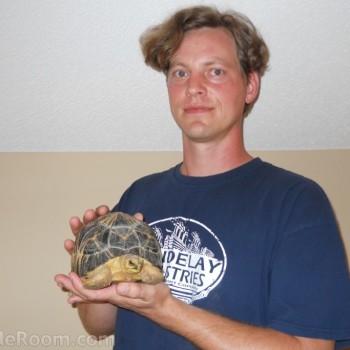 Ben is a Husbandry Specialist with more than 20 years of captive husbandry experience across countless chelonian species. His main responsibilities for theTurtleRoom (tTR) include working to develop quality, detailed captive breeding programs of carefully selected turtle and tortoise specimens in an effort to meet tTR’s conservation goals and providing images and knowledge towards tTR’s educational efforts.

Turtles have been a part of Ben’s life for more than twenty years. Growing up in Northeastern Ohio, Eastern Box Turtles (Terrapene carolina carolina) were the first to be cared for. They were typically kept for a few weeks before being released or escaping to freedom. His interest in turtles subsided during the teenage years when nothing compared to riding a skateboard and listening to music.

Between high school graduation and leaving for college, Ben’s interest in turtles was rekindled by the gift of a hatchling Midland Painted Turtle (Chrysemys picta marginata). As his passion and attention turned more towards herpetology, Ben dropped his studies in graphic design and illustration after a few semesters. Following this change in focus, Ben spent his time working in several pet shops during the mid-to-late 1990s and experienced caring for a number of different herps. However, none came close to inspiring passion in Ben the way chelonians did. Their captive care and breeding quickly became Ben’s focus.

In 1995, he hatched his first tortoises: three Russian Tortoises (Testudo horsfieldii). In 2002, now a decade into seriously keeping turtles, the focus of Ben’s collection of South American chelonians started to evolve. It became apparent that chelonians from the Southeast region of Asia were to become the new focus. Shortly after starting work in the Memphis Zoo herpetarium, Ben was urged to pursue and publish a regional studbook; Indotestudo forstenii (Forsten’s Tortoise) was the chosen species. After leaving the Memphis Zoo in 2007, Ben has maintained focus and has privately established a very diverse group of both wild collected and captive born I. forstenii. He has now been working with them and breeding them for well over a decade and has unmatched success. Currently, Ben is participating in the AZA regional studbooks for Indotestudo forstenii, Manouria emys (Asian Giant Tortoises), and Heosemys spinosa (Spiny Turtle).

Ben also uses his expertise to lead husbandry efforts with many other highly endangered species; his crowning victory is the successful husbandry and incubation of Heosemys depressa (Arakan Forest Turtle), a feat which few have been able to achieve. When not caring for his turtles and tortoises, Ben enjoys spending as much time with his family as he can. His children are part of the future generation of turtle conservationists.