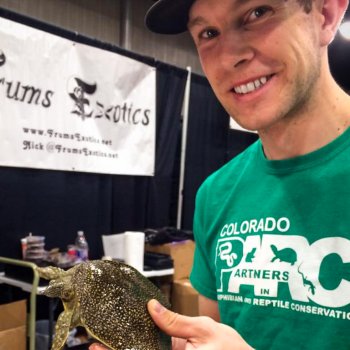 Max is a staff writer for theTurtleRoom, joining the education department to contribute to writing various types of articles to help further theTurtleRoom’s mission. His unwavering love for turtles did not come until he was taken out on a field turtling trip while in the 8th grade, but after seeing and catching his first wild turtles in Colorado there was no turning back. Shortly after, Max began working for a landscaping company whose owner took Max on his first turtling trip and they still go out in the field together often. This newfound love for turtles and experience landscaping quickly manifested as a pond dug in his parents’ backyard. Having only a few local turtle species in Colorado, Max quickly became attached to them; particularly Common Snapping Turtles and Softshell Turtles, which remain the current “favorites”. Max has kept several different species at home both inside and out, including native North American and exotic species. As soon as it’s warm enough, you’ll likely find Max out in the field looking for turtles and other reptiles.
Max has had a love for animals, particularly snakes and other reptiles, from a young age thanks to his kindergarten’s classroom Bull Snake. Growing up he would always develop fondness for the most unique animals he could find and research them in whatever way he could. This passion was a driving force for getting a volunteer internship at a local reptile store in the 5th grade. His two passions – animals and playing baseball – lead to an interesting route through three colleges in two states, before earning his Bachelor’s Degree in Zoology from Colorado State University. Max has always found a way to intertwine his love of sports and reptiles, whether that was removing two bullsnakes from the field before a game, or finding all of the reptile related sports teams such as Minor League Baseball’s Beloit Snappers.
During his last year at Colorado State, he got an opportunity to intern at the Denver Zoo in the reptile department, and this set his career path. He spent two years in his first full time zoo job at the Fort Worth Zoo, later returning home to the Denver Zoo as a keeper in the reptile, amphibian, and fish building. This career path has allowed him to continuously be involved with the care and conservation of turtles around the world, including breeding successes with several different turtles that are in Species Survival Plans.
Max has been published in scientific notes and articles, as well as species profiles all pertaining to the genus of North American softshell turtles, Apalone. He is currently a member of the Turtle Survival Alliance, Turtle and Tortoise Preservation Group, and Colorado Partners in Amphibian and Reptile Conservation.
Max currently lives just outside of Denver with his wife, Krystin, who is also a zookeeper at the Denver Zoo. They have their own mini zoo at home with many turtles, a tortoise, a gecko, a boa, two dogs, and a hawk that Krystin uses for falconry. Outside of work, Max loves hanging out with Krystin, going on turtling trips, playing and watching sports, and working in the backyard.