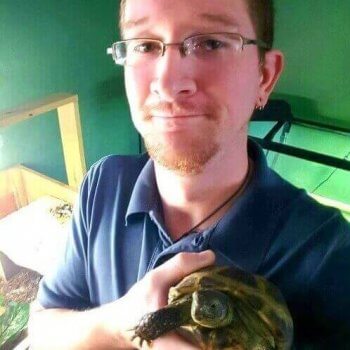 Matt Knight is a Staff Writer for theTurtleRoom’s Education Department, which includes contributing to World Turtle News. Since 2011, his love for turtles has become a full blown passion around which his life is centered. Conservation and education are close to his heart, and he spends much of his time keeping up with the world of turtles. A long-time fan of theTurtleRoom, now he is excited to be part of the team and help serve its cause on a professional level by helping to share knowledge and spread awareness of the many plights that turtle species face around the world.

On a personal level, Matt has spent years keeping or caring for various turtle species. When he discovered the Georgia Sea Turtle Center in 2012, he realized that his life was about education, conservation, and wildlife rehabilitation. He currently lives in middle Georgia and is the proud keeper of a North American Wood Turtle (Dr. Rockso, Glyptemys insculpta), a Yellow-spotted Amazon River Turtle (Pookie, Podocnemis unifilis), two rescue Russian Tortoises (Frederica and Abigail, Testudo horsfieldii), a rescue Red-Eared Slider (The Beans, Trachemys scripta elegans), and an awesome rescue dog named Fritz. Whether a member, volunteer, or supporter, he has regularly attended events aimed at educating the public about the awesomeness of reptiles. He has helped operate rescue efforts to rehome animals both scaled and furry, volunteered at the Atlanta Wild Animal Rescue Effort (AWARE) wildlife rehab in Georgia as both an ambassador enrichment handler for their non-releasable residents and a team leader, and held the position of Educations Docent at both the Georgia Sea Turtle Center and Tidelands Nature Center on Jekyll Island. He spends much of his free time writing, exploring the internet and web design, tinkering with 3D modeling and printing, building and maintaining habitats for critters, and doing what he can to encourage passion for life in others.