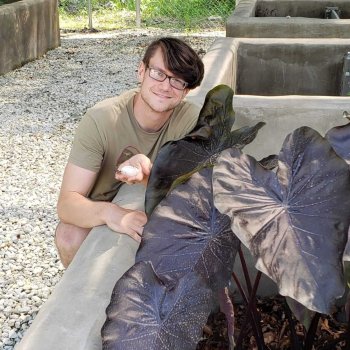 Zachary works as a Social Media Educator for theTurtleRoom (tTR) and also cares for several animals in tTR’s assurance colonies. He is also part of tTR’s collaboration with the Turtle Survival Alliance on captive conservation.

Zachary’s passion for reptiles started as a small boy in the suburbs of Atlanta, Georgia in front of the television watching and admiring the legendary Australian herpetologist, Steve Irwin. Throughout middle school, he would feed and care for a biology teacher’s Red Eared Sliders (Trachemys scripta elegans), Eastern King Snake (Lampropeltis getula), and various large South American Cichlids. Boyscout camping trips filled many of Zachary’s childhood weekends and summers; scouting for native Georgia herpetofauna was always first on his list of things to do!

Chelonians truly became his focus in high school when he read a book about turtles and their inner anatomy which greatly increased his appreciation for them and where he learned about their true plight in today’s world.

Volunteering at the TSA Turtle Survival Center in South Carolina, attending The Atlanta Symphony Orchestra and High Museum of Art, and scouting for great places to eat are a few of the things Zachary finds joy in on his down time.