For a long time, the biology of this species was confused with that of Pelusios subniger. Likewise, Pelusios chapini was considered a subspecies of Pelusios castaneus until 1983. The West African Mud Turtle, Pelusios castaneus, is a medium sized turtle from Western Africa measuring up to 28 cm (11″) for the largest females. The males are smaller and might reach a length of 25 cm (9.8″). The carapace is oblong to elliptical, broadest behind the center and uniformly dark. The first vertebral scute is panduriform and lines up with the first pair of marginals. The plastral hinge usually levels with the middle of the fifth marginal scute. The plastron is typically blackish with a wide, central, poorly defined yellow zone. However, three forms are recognized for Pelusios castaneus. The “normal form”, whose plastron and carapace are the typical coloration, the “rain forest form” that usually has a carapace and a plastron fully dark brown to black. Finally, the “savannah form” often has a carapace very light brown to caramel and a plastron fully yellow. The head is olive to brown with black vermiculating markings, two barbels protrude from the lower jaw, and the outside part of their limbs is a darker color (gray) than the inside (yellow). Limbs are poorly webbed and each foot is equipped with five powerful claws.

This species is widely distributed throughout Western Africa. It is found from Senegal to Central African Republic, including Cameroon and Gabon. It is also found in Congo (DRC) and Congo (ROC). The species has been introduced to the French West Indies, Guadeloupe.

Pelusios castaneus inhabits various water bodies such as streams, ponds, swamps, and lakes, from the west forest to the dry savannah. In Congo (DRC), this species is often found in marshes and swamps loaded with papyrus (Papyrus cyperus). In Gabon this species is confined in shallow, aquatic ecosystems with dense vegetation coverings such as submerged shrubs, savannahs, and lagoon banks but can also be found in swamps and lakes. This species is mainly active during the rainy season.

During the dry season, many of these habitats may dry out and the West African Mud Turtle is forced to aestivate buried in the mud or in the sand in order to escape the harsh conditions.

Pelusios castaneus is omnivorous; it adapts its diet according to what’s available in its environment. It mainly feeds on aquatic crustaceans, insects, fish, shrimps, crabs, or large snails. However, some vegetation such as floating water lettuce or seeds is also appreciated.

Despite its poorly webbed limbs, the West African Mud Turtle remains a relatively good swimmer. Highly active both night and day, young specimens are rarely seen basking. They tend to spend most of their time hiding in dense vegetation, swimming underwater, or walking on the bottom of the water. However, sub-adult and adult specimens will spend most of their daytime basking and enjoying the sun beams while they seem to increase their activity at dusk (from 6:30 pm). It is often observed that Pelusios castaneus enjoy wandering around at the bottom of the water, nuzzling and digging the substrate looking for something to eat.
Unlike most of the other species, P. castaneus do not shed scutes; instead, they shed large pieces of skin like snakes.

Note: Some specimens of Pelusios castaneus can secrete a putrid liquid from its axillary and inguinal odor glands to protect itself when handled.

Given its wide distribution, Pelusios castaneus seems to have some variation in the reproduction period. In Gabon, for instance, females were reported to lay their eggs during the dry season, between July and September, while some females were found gravid around February, too. Therefore, it is believed that this species lays eggs twice a year in the wild. It is able to produce eggs at an SCL of 12 cm (4.7″) and the eggs are uniform white, oblong, and soft-shelled, measuring from 33 mm to 37 mm (1.25-1.5″) length, from 17 mm to 27 mm (.67-1.05″) width, and weighing from 6 to 15g. Large females can lay up to 27 eggs.

Pelusios castaneus adults can be kept together but it is necessary to maintain a ration of several females for each male in order to avoid too much stress on the female; males will spend a lot of time harassing the female. If kept together, it is also necessary to have multiples hides (such as half a clay pot, plants or rocks) in the tank. Be aware that males can be very aggressive towards females. It is not uncommon for females to end up with bad bites on the neck from male aggression. Health care was needed and provided to the female after separating the two turtles.

Given their adult size, West African Mud Turtles must be kept in a large enclosure. A substrate of sand is more than welcome since this species spend most of its time wandering about on the bottom, digging the soil with its snout and limbs. Water must be clean but a brownish-colored water is preferred as it gives the animal some privacy. Wood logs will help provide tannins for dying the water. Aquatic plant and semi-aquatic plants like water lettuce, water hyacinth, papyrus, and pothos can be added in the tank, as well, to give the turtles something to rest on. For instance, mine always sleep on the wood log. Finally, a dry, heated basking area must be provided in the enclosure as adults spend a lot of time basking. In addition, a UVB bulb should be provided on top of the basking area. UVB is important as it acts as bacteria killer, helping to keep the shell clean and healthy, in addition to providing the Vitamin D3 necessary to process Calcium. Keep in mind that this species does not shed scutes; they will likely grow new scutes on top of each other. It is important to make sure that their shell remains neat.

Pelusios castaneus are omnivorous animals, but tend to have a heavy leaning toward carnivorous. In order to ensure a balanced and a complete diet, it is important to vary the food offered. Meat items are preferred over vegetables. Our animals are fed with raw river fish (such as roach, rudd, bream, gudgeon, minnow, bleak, eel, trout, char, or tench) but pieces of raw chicken or turkey are also acceptable. Shrimp and insects like earthworms, crickets, snails, slugs or woodlice are also well appreciated. Another good alternative is frozen animals, like birds or mice (thaw before feeding). Chicken liver could be given once in a while, as it is very rich in vitamin A. Finally, greens like banana, endive or water lettuce/hyacinth may be offered but may not be eaten. Fresh or living preys are always a better diet than the same items frozen. As far as a commercial pellet diet goes, we prefer Mazuri Freshwater Turtle Diet and Zoo Med’s Natural line over others. These can be offered as the primary staple, since it is usually cheaper and more convenient.

Given its natural distribution, Pelusios castaneus should definitely be kept in warm water, ranging from 24°C to 26 or 27°C (75-80°F). Allowing the water temperature to get warmer than this will cause your turtle to be very active, which is not so good for its health, if there is no seasonal changing observed. Likewise, allowing the temperature to get too much colder than this can slow down their metabolism, causing your turtle to be weaker and inactive. In our experience, when the water gets too cold, the Western African Mud Turtle will lose its appetite and will greatly reduce its activity, desperately looking for a heat source. The basking area should be kept hot in order to attract them. A temperature between 32-36°C (90-97°F) is best for this African species.

Pelusios castaneus can be subject to aestivation. It is not mandatory for breeding purposes, but it’s highly advised. To do so, it is best to imitate Mother Nature. This species goes through an aestivation to escape the harsh summer conditions in its native land. Therefore, one has to gradually increase the water temperature as well as gradually lower the water level in the enclosure at the same time in order to simulate the dry season. The water temperature should then be increased to 30-35°C (86-95°F) and the water drained off until the enclosure gets almost completely dry. The turtle should then start looking for a cooler place in which to bury itself.

Wild specimens will lay eggs up to twice a year. In captivity, it is often observed that Pelusios castaneus only lay eggs once a year. If an aestivation is performed, the mating ritual should occur fairly quickly after they wake up. The ritual often consists of the male rubbing his snout against the female’s snout in order to immobilize her. Then the male will climb on the top of the female and clamp himself to her with his claws. He will sometimes smash his snout against the females’ snout. Approximately two months later, the female will start to look for a place to lay her eggs. She will then dig a hole using her back feet. Note that large females can bury their eggs very deep in the substrate. Depending on the temperature of incubation, the eggs will hatch between 55 and 75 days. Pelusios castaneus requires a high humidity of 95%.

This species is somehow extremely strong and resistant. I have rarely seen sick specimens or specimens with shell rot or mycosis. The fact that it lives in warm water helps to maintain a good immune system. It is well known that cold environments can weaken the immune system and makes it more propitious to catch a disease. Likewise, this species is supposed to be kept with high UV index, which also helps killing bacteria in their tank. However, due to the fact that Pelusios species do not shed scutes, it is a must to make sure the water is clean. Unlike members of the Emydidae family, they won’t be able to shed their dirty shell scutes and are more likely to grow with them during their whole life.

Hatchling West African Mud Turtles are best maintained in a small enclosure with a water depth about 10 cm (4”). Lots of plants like water lettuce and water hyacinths should be provided to give privacy to the turtles. Half of a clay pot could be used to provide a place to hide under or to crawl onto. A basking area is even required as hatchlings with high temperature and UV as described above in the “Temperatures” section. Hatchling should be kept in warm water, ranging from 24°C to 26-27° C (75-80°F).

Hatchling Pelusios castaneus will eat a diet quite similar to adults. Bloodworms are a good choice, as they are easy to catch and the reddish color is very attractive to them. Small fish, crustaceans, insects and snails are also much appreciated and are a good source of nutrients. Small pieces of chicken and chicken liver can be provided. For a starter commercial diet, we recommend ZooMed’s Natural Aquatic Turtle – Hatchling Formula. 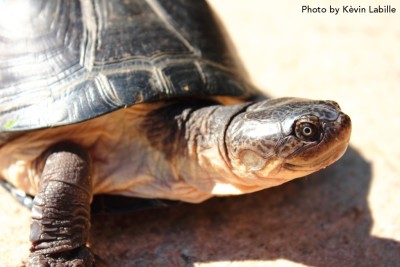 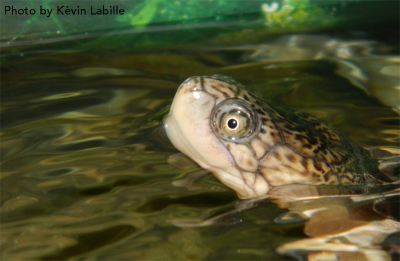 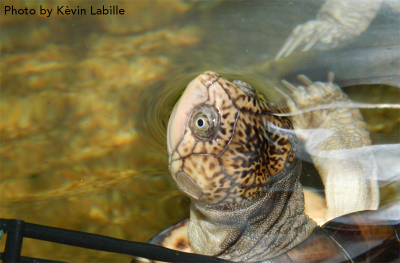 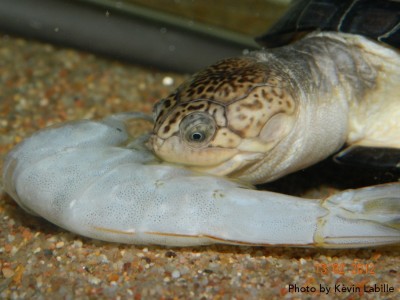 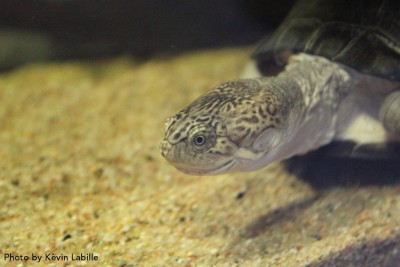 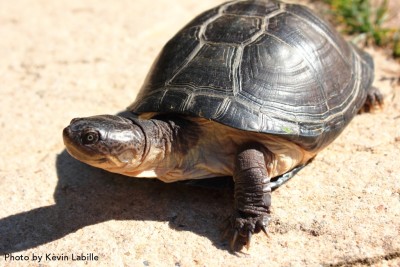 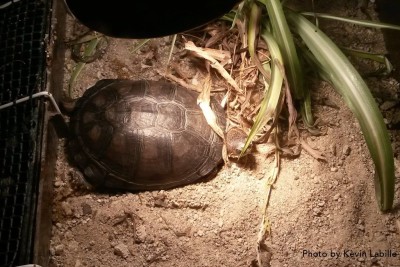 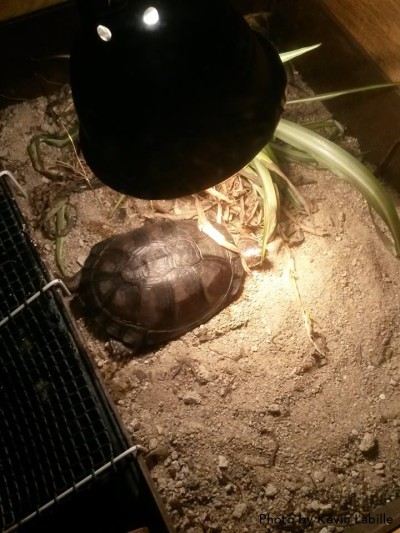 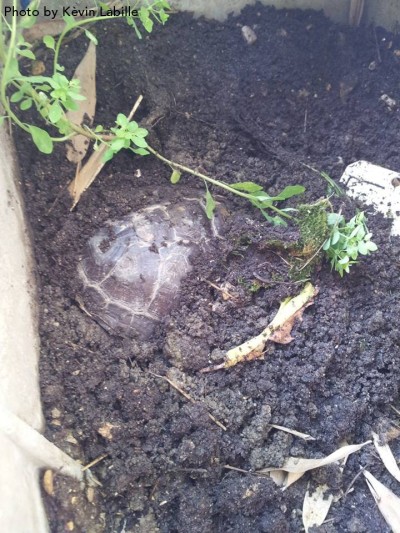 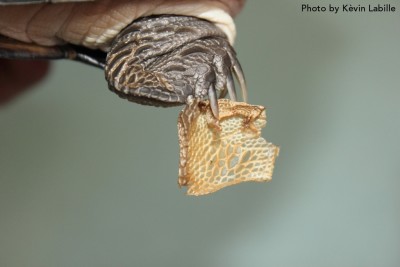 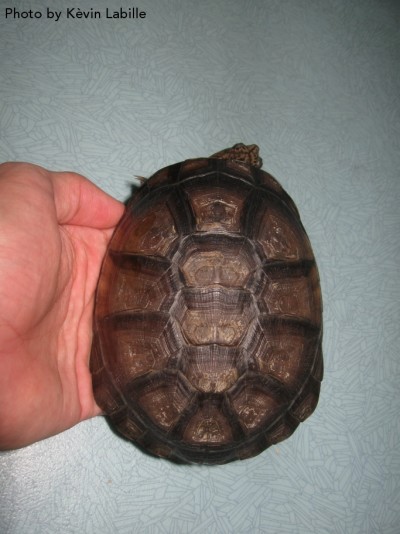 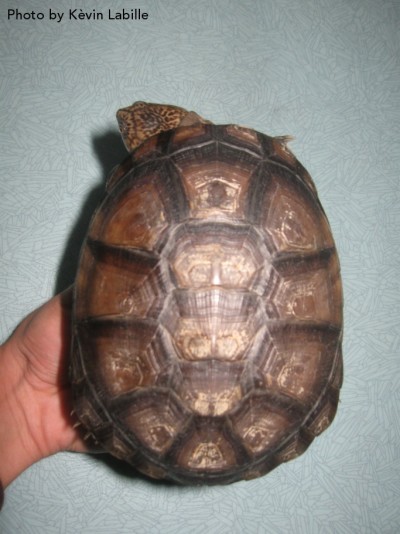 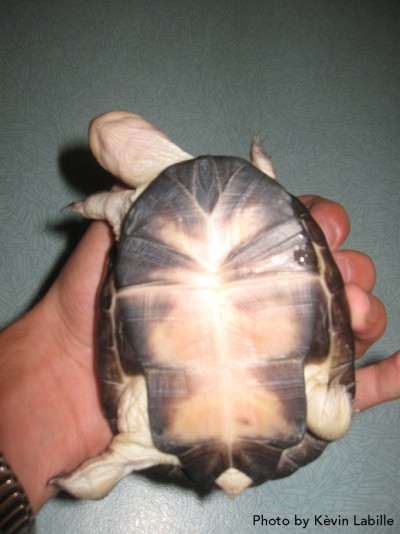 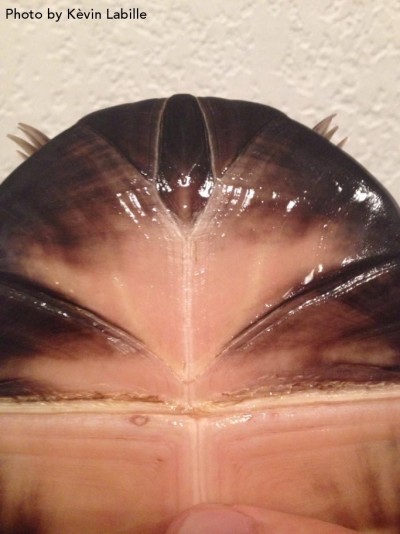 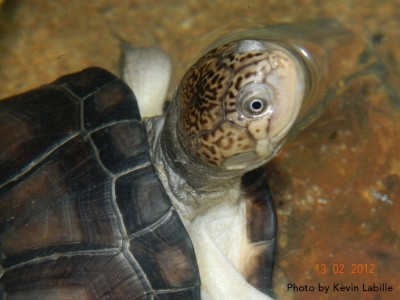 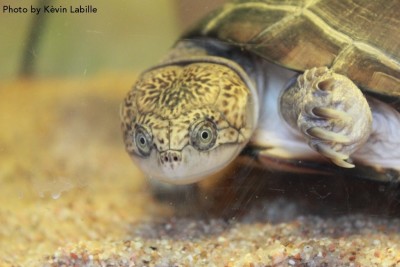 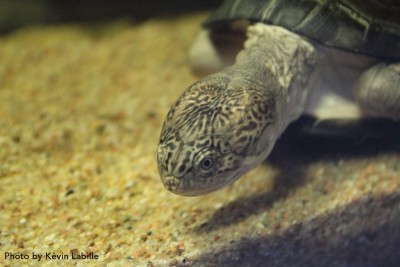 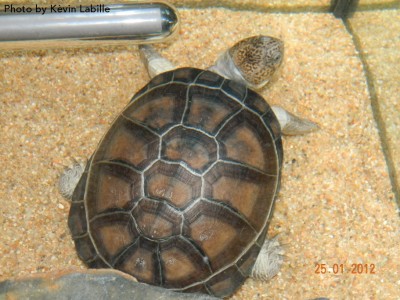 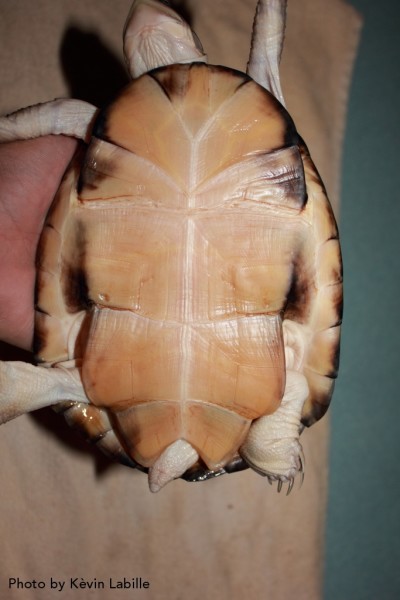 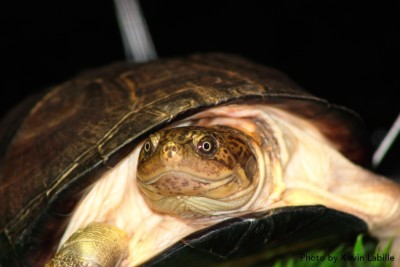 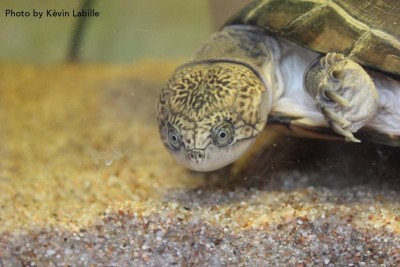 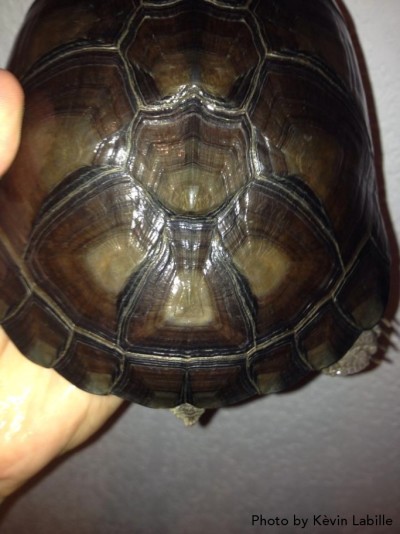 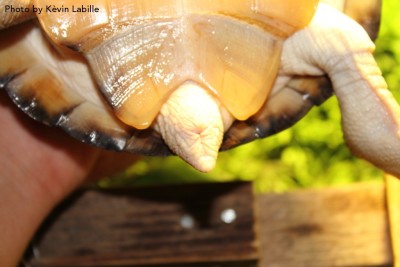