Graptemys pseudogeographica pseudogeographica is a medium to large map turtle. Females will typically reach 8-10”(20.3-25.4cm), max 10.6” (27cm), while males stay smaller at 3.5-5.5” (8.9-14cm), max 5.9” (15cm). The carapace is olive to brown with yellow, oval-shaped markings and a dark blotch on each pleural scute. It has a defined, but low keel and its posterior edge is serrated. Small vertebral spines are noticeable in hatchlings and juveniles, but almost completely disappear in adult females. The plastron is cream to yellow with an extensive seam following pattern that slowly vanishes with age. The skin of the head, neck, legs, and tail is olive to dark olive with yellow markings. The post-orbital mark is typically hockey-stick- or L-shaped with the handle extending as a stripe down the neck, though it is variable and occasionally appears as a triangular or rectangular blotch. There are typically dots above and below the jaw-line on each side of the head. The post-orbital mark mentioned previously and combined with yellow eyes with a transverse bar and a yellow beak identifies G. p. pseudogeographica from the other subspecies, G. p. kohnii. Males will have longer and wider tails with the cloacal opening 1/2 to 2/3rds of the way down the tail and a more juvenile appearance. Females will have shorter, narrower tails, a much larger build, and broader heads, though not to the extent of the broad-head group of Graptemys species.

The False Map Turtle has a wide distribution through the Mississippi drainage and several smaller drainages, mostly to the west. Records include observations through parts of Ohio, Indiana, Illinois, Wisconsin, Minnesota, North and South Dakota, western Kentucky, Tennessee, and Missouri. Due to its wide range, numerous river systems are inhabited by this species – the larger systems include the Mississippi, Missouri, and Ohio drainages.

G. pseudogeographica ssp. primarily occupies medium-to-large rivers and their backwaters, but also uses floodplain habitats and impoundments (lakes and ponds). Plentiful aquatic vegetation seems to be a preference in habitat characteristics, as are slower currents and a multitude of basking locations. In Kansas and Wisconsin, this species was frequently found in areas with a muddy substrate. In Kentucky, there was a wide selection of habitats used by the False Map Turtle. Abundant mollusk prey has also been associated with well-populated habitats.

Due to G. ouachitensis ssp. having been previously listed under G. pseudogeographica, much of the behavioral history is partially masked between G. ouachitensis ssp. and G. pseudogeographica ssp. These species are active from late March to mid-October, with shorter active periods in the north and longer active periods in the south (sometimes year-round). They have a tendency to hibernate in groups. Winterkill has been documented during dry winters in some locations within the range. These species, including juveniles, spend a large portion of their day basking. Selected basking locations are seldom on or near shore and can be as high as 2 meters above the water surface. While basking, these species are wary and difficult to approach; one turtle re-entering the water due to disturbance often leads others to follow. Peak basking appears to occur in March – April, June, and September – November. Many different internal parasites have been reported. Predators of hatchlings include ring-billed gulls, American crows, grackles, and red-winged blackbirds. Adults have fewer predators, and a symbiotic relationship between grackles and turtles has been observed, as the turtles have allowed the grackles to approach and pull leeches from them.

Males are sexually mature at a minimum PL of approximately 3" (7.5cm), which they typically reach by the time they are 3-4 years old in the wild. Females mature at a PL around 7.1" (18cm), which may require as many as 8-12 years to reach. Captive specimens tend to grow and mature more quickly due to a nearly year-round growing season.

Courtship and mating occur in both spring (mainly April) and fall (October and November). A common courtship ritual is for the male to begin by placing his nostrils near the female’s anal vent, and possible even nip at her hind region. He then will position himself in front of the female, nearly touching her nose with his, then positions his forelegs with palms facing the female’s face and vibrates them against the side of her head. He may bob his head up and down in coordination with the claw fanning. This act is followed by the male swimming behind the female and if she remains motionless he will attempt to mount the female by hooking his tail around hers.

Nesting season runs from mid May through late July depending on location within their range. They will nest at any time of the day, but seem to have a preference between 6:30 and 10 in the morning. The False Map Turtle will typically lay 2 clutches per year, but occasionally 3 or 4. Clutch size varies from 8-22 eggs, with an average of 10-14, depending on the locale. G. pseudogeographica ssp. has TSD-1a, meaning males come from lower temperatures and females from higher temperatures. The pivotal temperature is approximately 84°F (29°C) with 100% males at 77°F (25°C) and 100% females at 86°F (30°C). 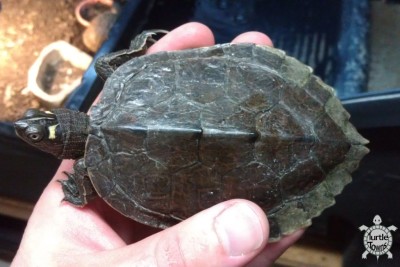 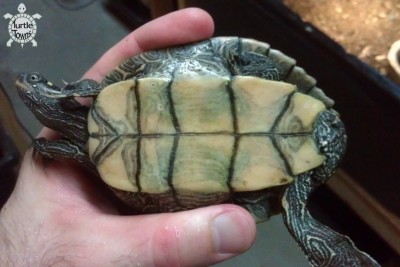 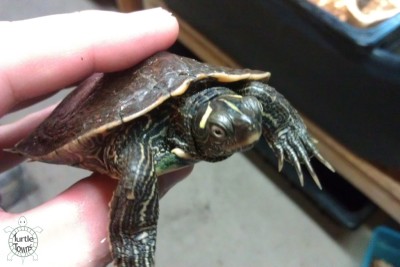 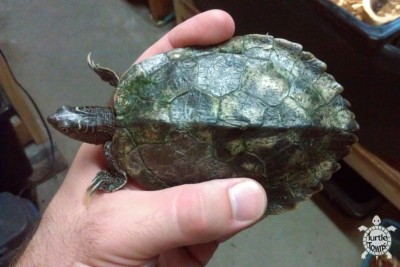 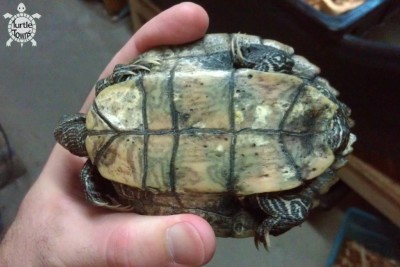 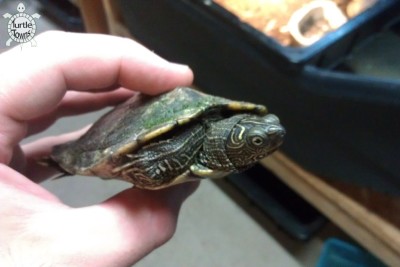 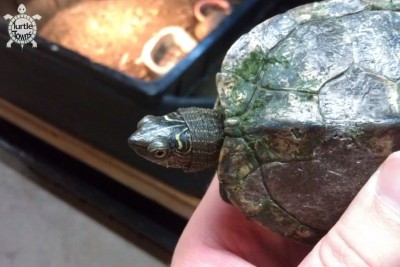 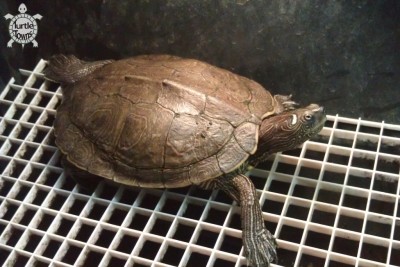 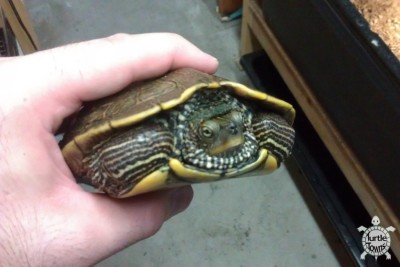 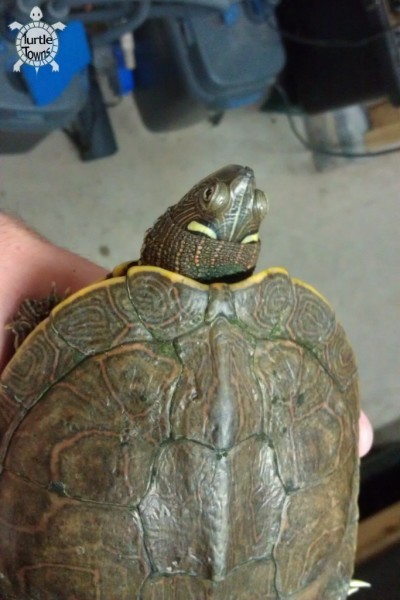 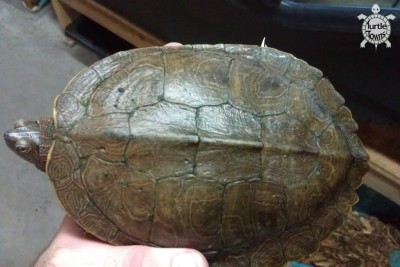 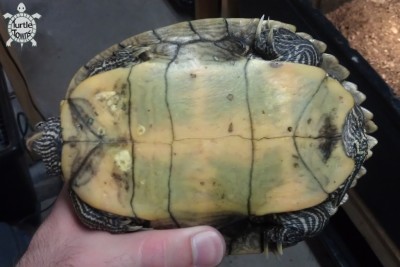 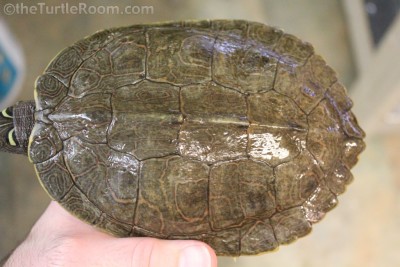 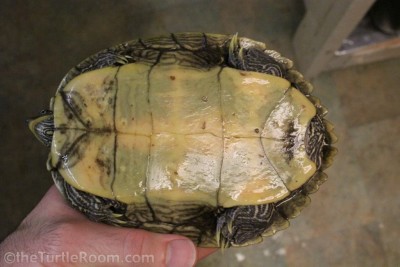 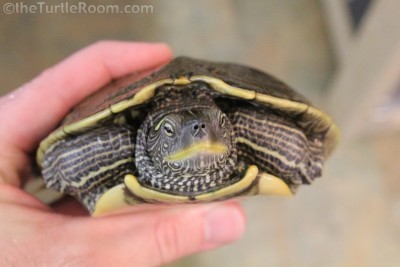 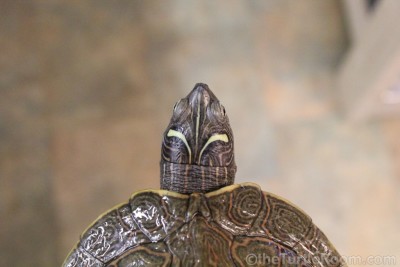 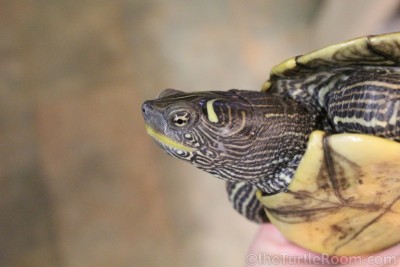 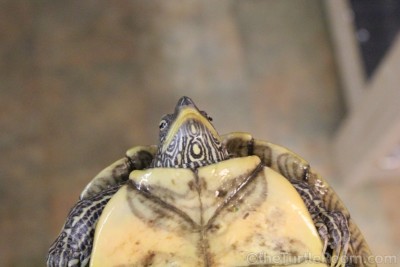 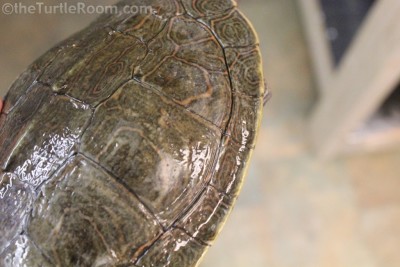 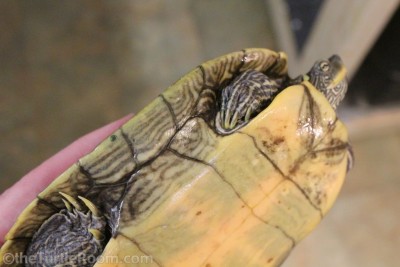 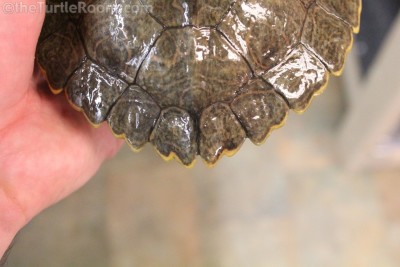 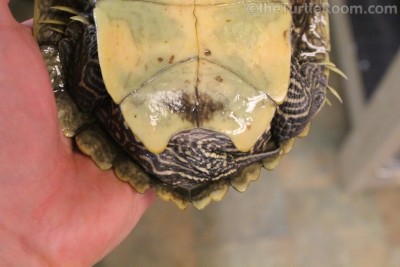 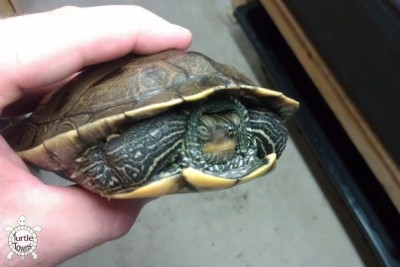 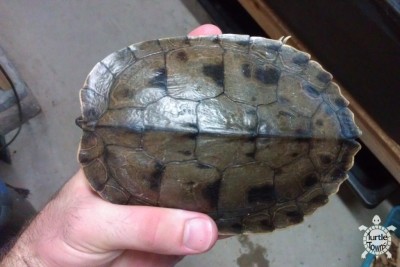 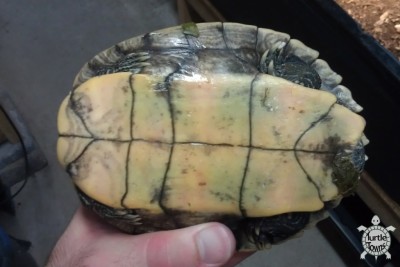 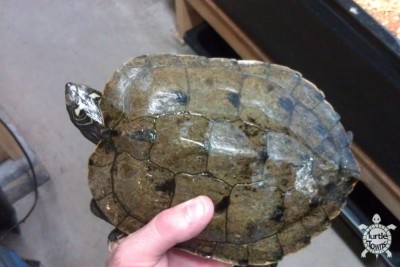 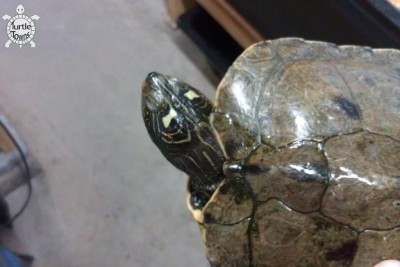 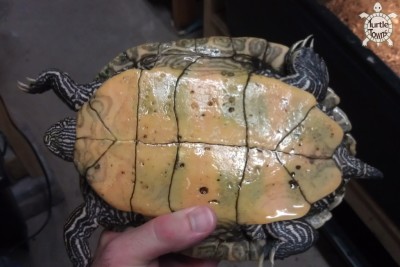 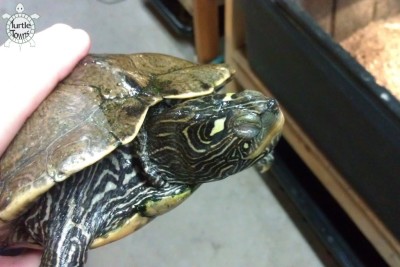