Graptemys gibbonsi is a medium to large map turtle. In 2010, G. pearlensis was broken from synonymy with G. gibbonsi. The visual cues described later to identify between the two species come primarily from the research done by Ennen, Lovich, et al. and published in 2010. Females will typically reach 9”-10.5” (22.9-26.7cm), max 11.6” (29.5cm) while males stay considerably smaller at 3.5”-4.5” (8.9-11.4cm), max 4.9” (12.4cm). The carapace is dark olive to brown, high-domed, and moderately keeled. As hatchlings, the keel is stronger with dark spines that become smaller with age. There is a black dorsal stripe that is frequently broken (the break often occurs toward the rear of the carapace). The posterior edge of the carapace is serrated. Each pleural scute contains yellow or orange markings. The dorsal surface of each marginal has a wide bar of the same yellow or orange color and typically has prominent concentric circles, as well (the description focuses on the 5th left marginal). The 12th marginal has pigment that usually extends at least 50% up the scute toward the last vertebral scute. The plastron is yellow with dark pigment following the seams. The ventral surface of the marginals has some dark pigment on them, particularly marginals 1 through 5. The skin is brown to olive with light yellow or yellow-green stripes and blotches. The head pattern contains a large interorbital blotch that is connected to a pair of postorbital blotches. These blotches are unlikely to form a trident on top of the nose. G. gibbonsi is a member of the broad-head group of map species, and so the females have heads that get considerably large as they age. The head of the male stays more proportional to the size of the turtle. Males will have longer and wider tails with the cloacal opening 1/2 to 2/3rds of the way down the tail and a more juvenile appearance. Females will have shorter, narrower tails, a much larger build, and as mentioned before, much broader heads.

The Pascagoula Map Turtle is endemic to the Pascagoula River System in Eastern Mississippi. This includes the Pascagoula, Leaf, Chickasawhay, and Lower Escatawpa rivers as well as a number of tributaries (including some smaller creeks).

The habitat of G. gibbonsi is typically the main channel of large to medium creek or river. Features of their preferred habitat include: swift currents, sand or gravel bottoms, sandy beachers, and numerous logs or snags on which to bask.

Large-headed females have a diet dominated by mollusks, especially clams. Other favorites include snails and crustaceans. The small-headed males and juvenile females eat predominantly insects.

Little information on the behavior of G. gibbonsi is available. The Pascagoula Map Turtle is primarily diurnal. Basking has been observed throughout the day, with peaks at midday and late afternoon. Voluntary parasite release has been observed on female G. gibbonsi, as the carapace became hot enough for a leach to detach on its own. Foraging is also done during the day and night is spent underwater, hanging on branches of underwater tree limbs just below the water surface.

Nesting season runs from late April through early August. It is normal for them to lay several clutches per year, typically with 4-8 eggs per clutch. Females typically must be at least 7” (17.9cm) SCL to be sexually mature. The smallest recorded sexually mature male was 3.5” (8.9cm) PL. The species is suspected to demonstrate TSD-1a like the rest of the Graptemys genus. 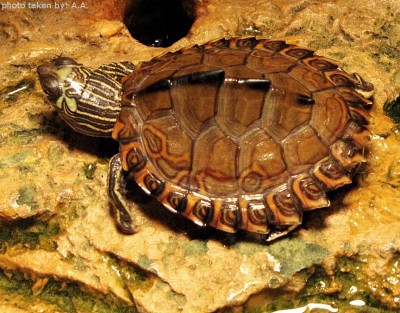 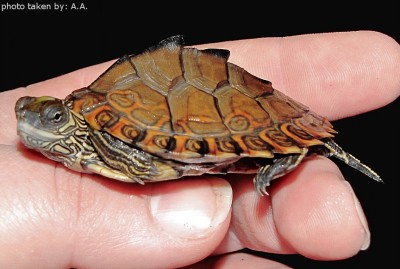 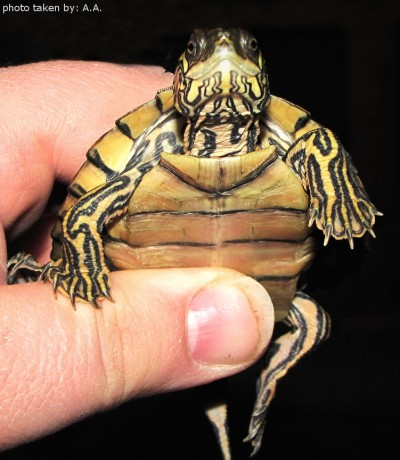 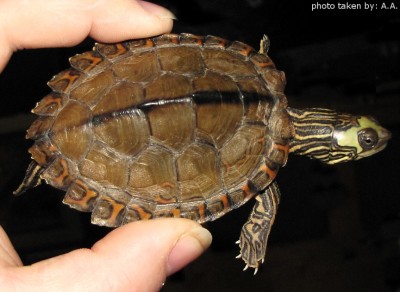 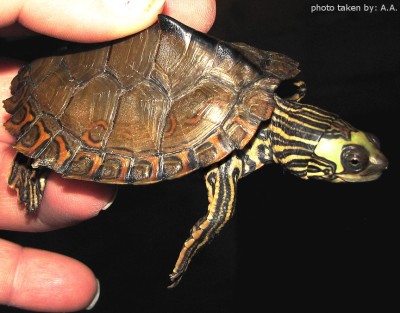 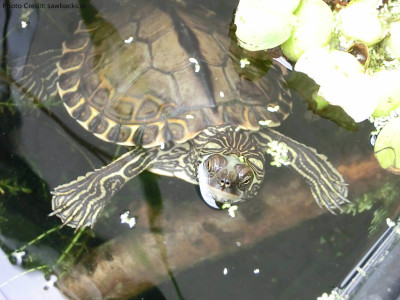 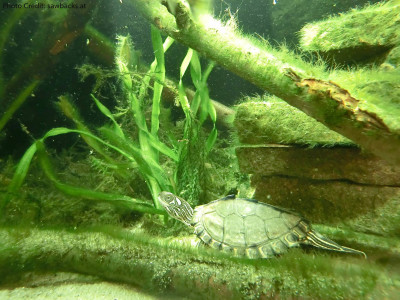 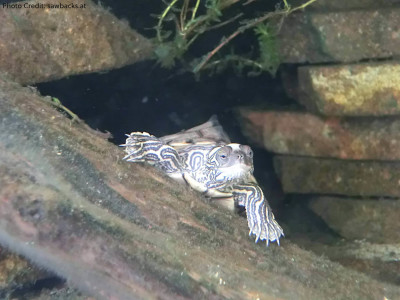 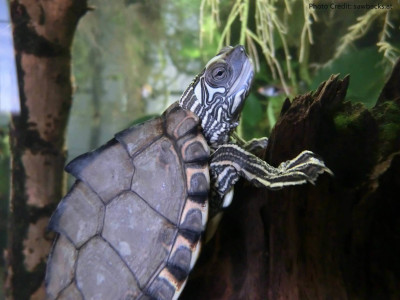 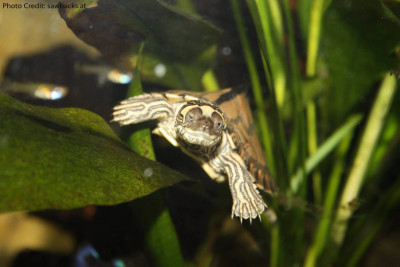