Assurance colony for the Four-Eyed Turtle

Sacalia quadriocellata, also known as the Four-Eyed Turtle, is found in South and East Asia. Like many other Asian turtle species, Sacalia quadriocellata populations have declined due to the Chinese food market, the medical market, pet trading, and habitat loss. As a result, Sacalia quadriocellata is listed as endangered on the IUCN Red List. The purpose of theTurtleRoom’s Sacalia quadriocellata project is to produce genetically diverse offspring and create an assurance colony to act as a safeguard in the event of severe population decline of this species in the wild. These captive bred individuals also serve as a trade surplus to facilitate further breeding in collaboration with AZA institutions and zoos. The project is always in need of funding for habitat improvement and habitat design costs, as well as other husbandry needs such as feeding, lighting, and filtration. We also hope to acquire more individual turtles to add genetic diversity and ensure that the captive bred population continues to grow.

The Four-Eyed Turtle (Sacalia quadriocellata) is a semi-aquatic turtle with a range from central and southern China — including the provinces of Guangdong, Hainan, Guangxi, Fujian, and Jiangxi — into eastern Laos and northern Vietnam. S. quadriocellata lives in streams and small brooks in woodland, mountainous regions. They are typically found below 500 meters in altitude, most often between 170 to 470 meters.

Four-Eyed Turtles are small, only growing to a carapace length of 11-15 centimeters (4.25-6 inches). While there is no size difference between the sexes, they do differ in the species’ primary identifying feature — the set of four colorful ocelli on the top and back of the head. These ocelli are typically yellow in juveniles and females or light blue-green in males. In either case, there is a central black dot. The carapace of the Four-Eyed Turtle is oval and ranges from medium brown to a blackish or dark green, with darker areas focused around the seams of the scutes. The head is a dark beige, blackish, or bluish and can be marked with mottling or light spots, particularly between the jaw and ears. The skin of the neck is marked with a few stripes, medium in width and regularly spaced that originate at the skin fold behind the head and disappear at the base of the neck. The feet are well webbed. As with many species, males typically have longer, thicker tails.

Four-Eyed Turtles are omnivorous, but have a fondness for earthworms, mollusks, crustaceans, and fruit. Daily activity is most frequent from the evening through sunrise, while still maintaining a relatively high level of activity from then until noon. However, they conserve energy through the peak of the day from noon until the evening. Annual activity peaks from April through September; however, male activity declines in June, while female activity spikes. Female activity also spiked in January when the largest amount of egg-laying activity occurs. However, in captivity, egg-laying activity peaks from late-May to mid-June. 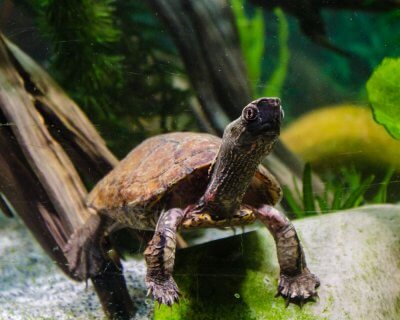 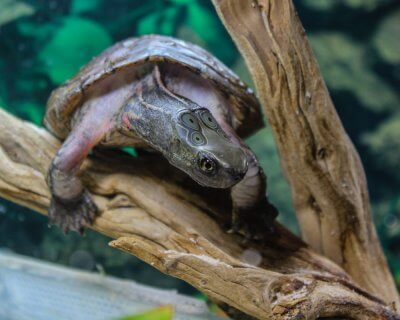 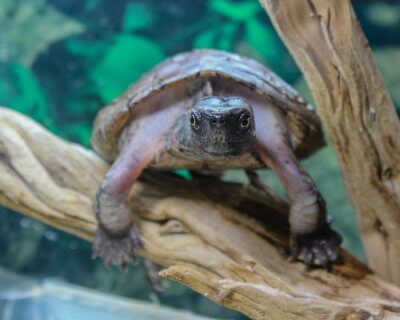 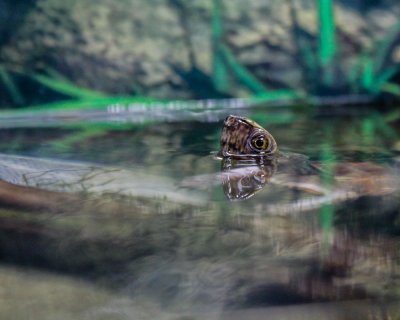 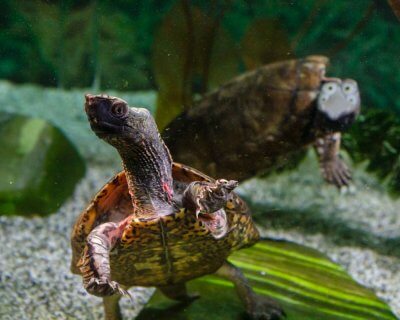 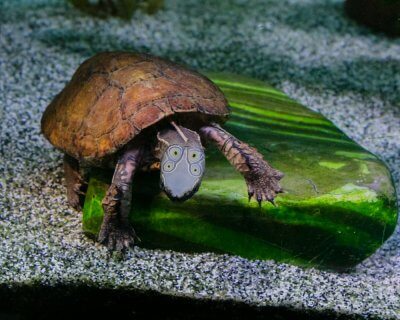 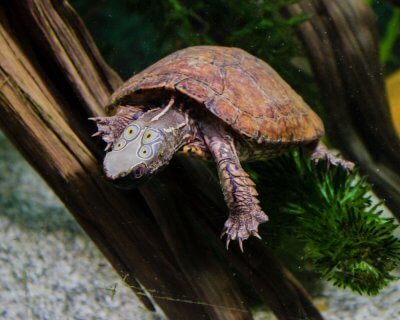 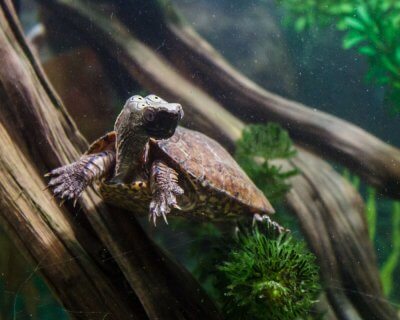 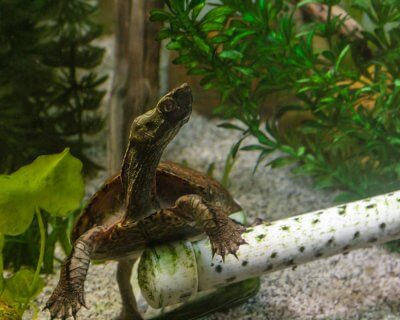 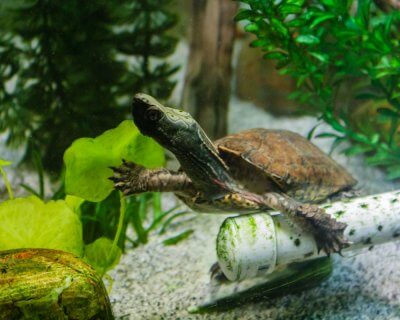 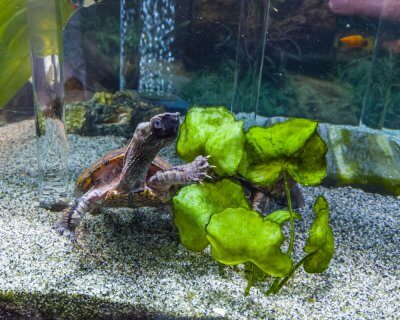 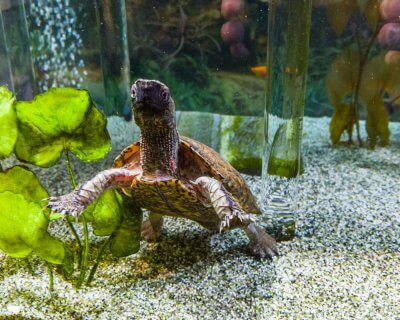 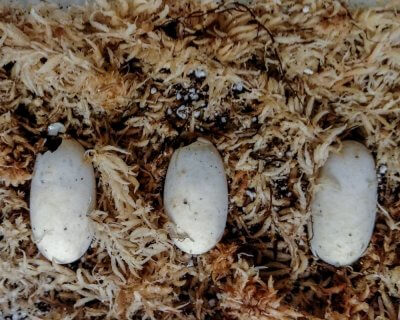 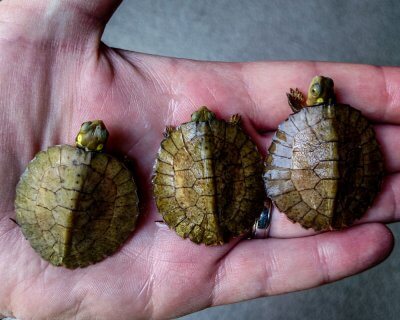 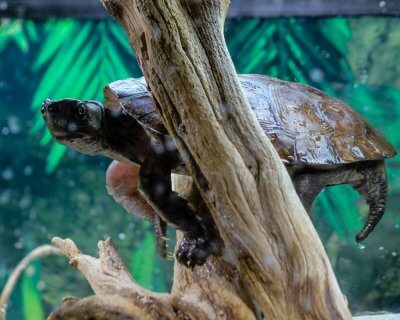 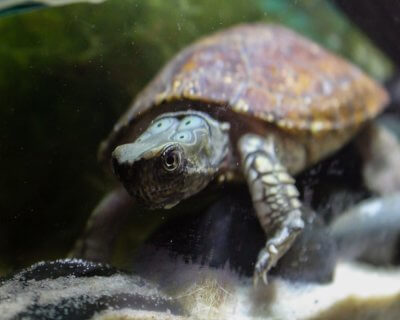 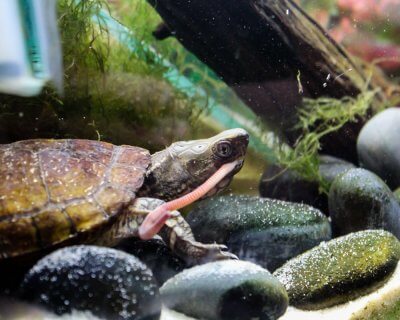 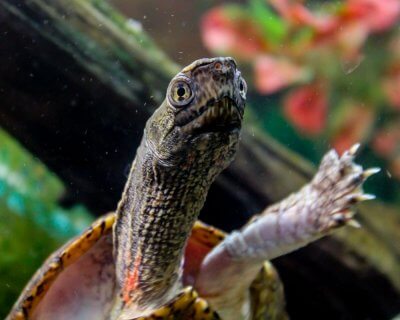 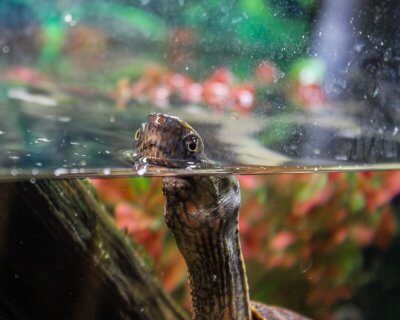 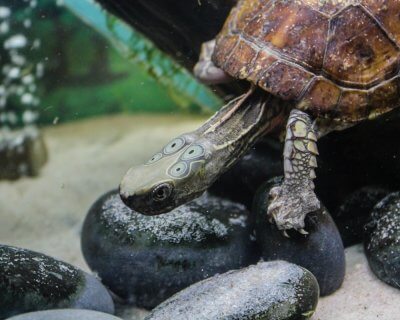 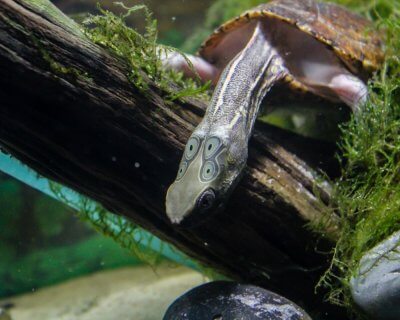 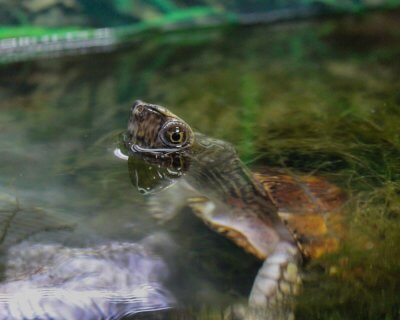