Chris is the owner and operator of Garden State Tortoise and Hermanni Haven. He is the studbook coordinator for the North American Regional Studbook for Testudo hermanni hermanni and his work with the world's turtles and tortoises spans over two decades. Chris' life centers around keeping and breeding dozens of species with a primary focus on Mediterranean tortoises and turtles of the Northeastern United States, among others. He is an educational resource partner of theTurtleRoom.org and a writer for Reptiles Magazine since early 2011. He is an active member of several turtle and tortoise forums across the globe and his educational/identification videos along with photo galleries have received thousands of views. In previous years, Chris has been a helping hand in turtle dioramas at the American Museum of Natural History, has provided live specimens for several state nature museums and has aided in photography for books and other magazines on the subject in addition to care sheets for reptilechannel.com. His work with local humane societies, fish and wildlife agencies and zoos has helped countless turtles find new homes and his research is ongoing. Visit him and his amazing animals at gardenstatetortoise.com and hermannihaven.com. Also, be sure to catch his articles in upcoming issues of Reptiles Magazine or look for back issues such as "Gems of the Mediterranean" (January 2011), "Smile Big" (October 2012), "An American Classic" (July 2013), "Long Live the Greeks" (April 2014) and "The Engraved Turtle" (July 2014). 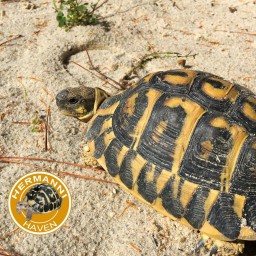