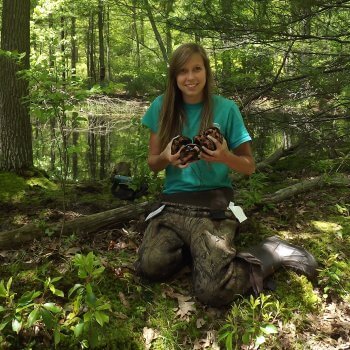 Miranda is a Field Project Manager for theTurtleRoom (tTR). She is an avid participant in the Pennsylvania Wood Turtle Monitoring project, led by Andy Weber and Steve Enders. As part of her role as Field Project Manager, she works with Andy Weber to develop and execute a new field project in a location where tTR has not yet ventured.

At a young age, Miranda became intrigued by catching-and-releasing the local irrigation pond inhabitants, Chrysemys picta (Eastern Painted Turtle). One summer, she fed and cared for a temporary yard pet Terrapene carolina (Eastern Box Turtle) named Bobby (for his stubbed tail), who taught her about the vast diet that an omnivorous turtle would enjoy.

Miranda attended Juniata College, in Central Pennsylvania to obtain a Bachelor’s degree of Science in Wildlife Conservation. During this time, she bought her first tortoises Shiloh and Darwin the Testudo (Agrionemys) horsfieldii (Russian Tortoises), and despite doing research, she knew she had a lot to learn to keep them happy and healthy! One summer, she took a field course with Dr. John Matter and Roy Nagle which lit her passion for fieldwork on the ecology of freshwater turtles of North America. Her favorite experiences included surveying the turtles of the Juniata River via kayak, repairing a wildlife highway fence to keep nesting Graptemys geographica (Northern Map Turtles) and Glyptemys insculpta (Wood Turtles) from crossing a highway and learning the ins and outs of using radio telemetry to track turtles on mountainside habitat. The remainder of her time at Juniata, Miranda conducted fieldwork advised by Roy Nagle on the Overwintering Ecology of Eastern Box Turtles at Raystown Field Station.

When realizing that she was not finished doing fieldwork, Miranda chose to enroll in Graduate School to earn her Master’s degree in Biology at Shippensburg University of Pennsylvania. She excitedly decided to pursue a thesis study under Dr. Tim Maret, and revisit a Clemmys guttata (Spotted Turtle) population that had been radio tracked ten years prior, to assess if it had changed its habitat use while the habitat underwent forest succession in a once timber harvested landscape.

Miranda currently resides outside of Winchester, Virginia where she lives on a farm with her boyfriend. Besides keeping Darwin, Lena, Ada, Rio and Chicory; a breeding colony of Russian Tortoises, she likes to beekeep and help rear Bobwhite Quail. She is employed as a Field Technician for the National Ecological Observatory Network (NEON) where she collects data on small mammals, ground beetles, ticks and mosquitoes. In her free time she enjoys volunteering at the Blue Ridge Wildlife Center which includes caring for injured native wildlife (many are Box Turtles), as well as providing enrichment for her best turtle friend, Tugboat the Education Ambassador Wood Turtle.

Miranda met Steve and Andy and became involved with tTR and the Turtle Survival Alliance (TSA) when she won the t-shirt design contest for the TSA Symposium held in Charleston, South Carolina in 2017. She still likes to create digital and acrylic painting works of (mostly Chelonian) art, although it takes a back seat to spending time in the field.