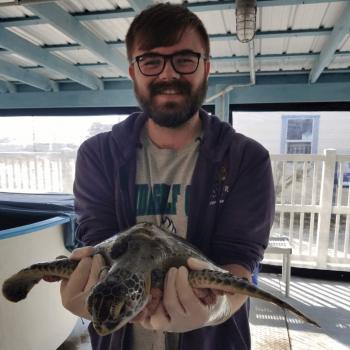 Liam Whitmore is a zoologist and conservationist from the UK and is currently studying for his Ph.D in Ireland. Liam obtained his M.S. Zoology with Conservation from Bangor University, Wales before proceeding to study marine turtles. He has always had a fascination with the natural world and tries to experience as much of it as possible, whether that’s through his travels, work or wildlife photography. After knowing the career path he wanted to take in zoology/conservation, Liam then took a keen interest in reptiles, particularly turtles and tortoises after starting to research and read about them in his own time and during his degree. He also ventured to Greece to aid in loggerhead turtle conservation work as an intern during Summer 2018 which further spurred his ambition to work with turtles full time.

Through a lot of luck, Liam is now studying marine turtles for his Ph.D with the main focus on marine turtle fibropapillomatosis (FP). FP is a tumour forming disease afflicting all seven marine turtle species but affects green turtles (Chelonia mydas) most. He studies in Limerick, Ireland but also gets to venture to Florida occasionally for his research and to get hands-on with some awesome shelled reptilians and take part in the conservation work and research they carry out at Whitney Laboratory for Marine Bioscience.

Speaking of reptiles, Liam also keeps a leopard gecko (Eublepharis macularius) and common musk turtle (Sternotherus odoratus) at home, which forms one of his hobbies. He also is an amateur wildlife photographer and is in the midst of creating his own website to showcase his photography. He also hopes to create his own blog highlighting current environmental/conservation issues such as eco-friendly products, single-use plastic and deforestation. He plans to share his photography/blog through social media such as Facebook and Instagram (@liams_nature), which he also sees as an interesting hobby.