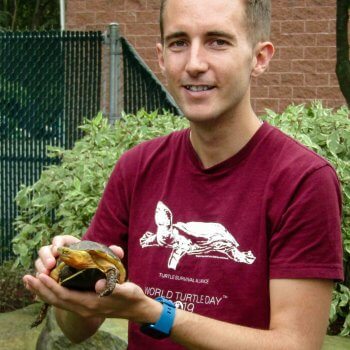 Derek joined theTurtleRoom staff in March 2020 as part of the Social Media team where he assists with content posting. He is liaison for inquiries submitted to theTurtleRoom and recently branched out into writing.

Like many, Derek’s first turtle love was for Eastern Box Turtles (Terrapene carolina carolina) that he would encounter in the woods of West Virginia as a child. He would build outdoor homes for them in his yard using old jungle gyms and playsets. He was always fascinated when his Box Turtles (named after the four mutant ninja turtles) would dig down to sleep in the fall and always came back in the spring. When he grew up and realized his favorite animal was in danger, he started finding ways he could help save them.

Derek has always passionately advocated for saving native turtle species, and before joining theTurtleRoom, he created his own turtle rescue operation from his home in 2017 called TheTurtleFellow. His mission was to help aid his local community with any turtle-related issues. Finding emergency veterinary care, answering pet turtle questions, or simply moving an angry snapping turtle are examples of Derek’s volunteer commitment.

With the lack of public information concerning turtles, Derek decided to take the initiative to help turtles anywhere and anyway he could. He created a network of contacts to aid his mission of saving turtles. In 2018, he was able to save over 50 turtles alone through his personal rescue efforts. After joining theTurtleRoom, Derek feels he is more equipped than ever to help chelonians and is grateful to have joined a family of friends with the similar goal to save our native turtles!

Outside of his passion for turtles, Derek received his Associates Degree in Medical Assisting from Pittsburgh Technical College. After graduating he worked in Family Practice, Psychiatry, Pain Management, Venous Surgery, and Plastic\Reconstructive Surgery. Currently, Derek is pursuing his Nursing Degree with hopes of attaining a Masters in Nursing.

Derek resides in West Virginia where he keeps a Leopard Tortoise (Stigmochelys pardalis), Eastern Painted Turtles (Chrysemys picta picta), and Box Turtles (Terrapene carolina). He looks forward to being more involved with the captive husbandry side of theTurtleRoom as well.